It was the second eruption in as many days at Mount Sinabung. Although there were no fatalities, residents have been warned of the danger lava could pose. 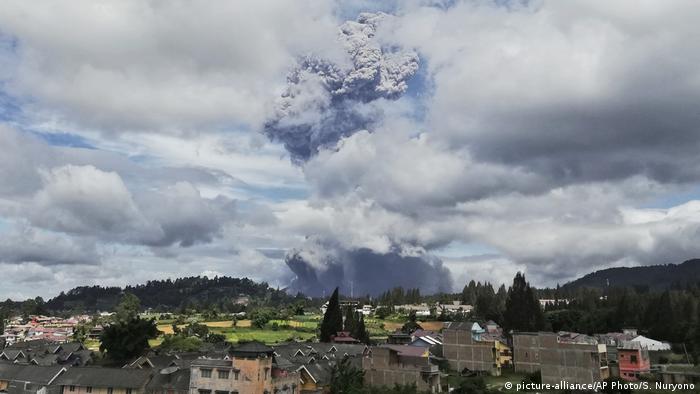 Mount Sinabung on Indonesia's Sumatra island erupted on Monday, firing ash and other volcanic materials as high as 5,000 meters (16,400 feet) into the sky. It was the second eruption since Saturday.

"The sound was like thunder, it lasted for less than 30 seconds," resident Rachrur Rozi Pasi told Reuters.

Indonesia's Volcanology and Geological Hazard Mitigation Center said there were no reported fatalities or injuries from the eruption. But it did say that people should stay at least 5 kilometers (3.1 miles) away from the crater's mouth.

The civil aviation authority said flights were still operating in the region.

The agency said people in the area should cover their face to protect themselves from the ash fallout and be careful of potential lava flows. An official at the Mount Sinabung observation post said ash already covered several villages that were up to 20 kilometers from the crater.

"The situation around Mount Sinabung is very dark now," said Gilbert Sembiring, who was visiting a friend near the volcano when Monday's eruption occurred. "It was bigger than the eruption a couple of days ago." 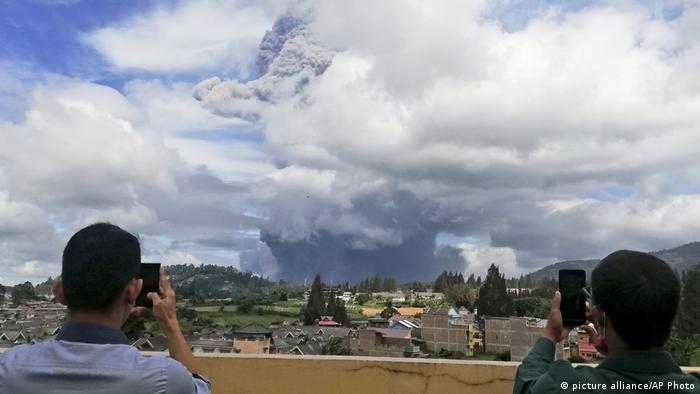 The volcano sent a column of volcanic materials a few thousands meters into the sky.

No signs of slowing down

Mount Sinabung is one of more than 120 active volcanoes in Indonesia, which is prone to seismic activity on the Pacific "Ring of Fire," a ring of volcanoes and moving fault lines that surround the ocean.

Mount Sinabung had been inactive for centuries until it erupted again in 2010. It has been active ever since, occasionally erupting.

An eruption in 2014 killed 16 people, while seven died in a 2016 eruption. Tens of thousands of people have been forced to leave their homes around the active volcano over the past few years.

The country's most active volcano has spewed ash 5,000 meters into the air, prompting officials to tell residents to "stay calm and not panic." It's the second time this month that Mount Merapi has erupted.

Scientists say the Anak Krakatau volcanic island in Indonesia has lost three-quarters of its volume since it erupted a week ago, causing a deadly tsunami. And it is also considerably shorter.