Just under 1% of Indonesia's 17 million Indigenous people have been vaccinated against COVID. Bureaucratic and geographical obstacles are to blame for the low rate of inoculation. 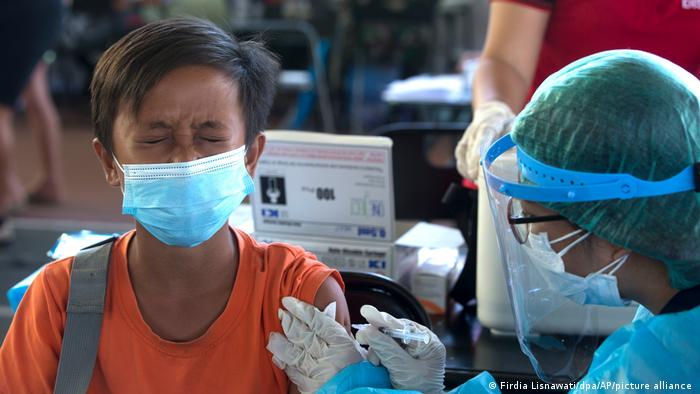 Almost a third of people in Indonesia have been fully or partly vaccinated, but Indigenous groups are badly underrepresented in that figure

Dolfintje Gaelagoy was known affectionately as Mama Do to her family and friends. As the traditional leader of Indonesia's Indigenous Marafenfen community, she was celebrated for her courageous fight against large-scale sugar plantation concessions in the Aru Islands of Maluku Province. In early July, Gaelagoy died from COVID-19.

The number of Indigenous people securing access to vaccines is even lower. According to the Indonesian Alliance of Indigenous Peoples of the Archipelago (AMAN) — a network made up of around 2,253 Indigenous groups from across the country — less than 1% of 17 million Indigenous Indonesians have been vaccinated.

Devi Anggraini, the head of Perempuan AMAN —  the women's wing of the alliance —  warned that many Indigenous communities lack access to basic health care facilities and typically live hours away from the closest town.

"We have lost so many tribal leaders in Indigenous villages," she told DW.

Indonesia in the grips of a COVID surge fueled by delta

Indonesia's COVID vaccination program currently focuses on health care workers and those residing in densely populated areas such as the country's megacities.

But in more remote areas such as East Barito in Central Kalimantan Province, vaccination is available only in district health centers.

"Indigenous people in East Barito found it difficult to get to the health centers because they do not have motorcycles," Yeriana, an Indigenous community leader in East Barito, told DW.

She said the distance between villages in her region and district health centers ranges from 20 to 80 kilometers (12.4 to 49.7 miles).

Yeriana also warned of the possible health risks involved in large groups of people walking together for days on end to reach district health centers.

In addition to geographical obstacles, bureaucracy has hampered vaccination efforts in Indigenous communities. The Indonesian government requires all citizens to show their identity cards to get their shots. The majority of Indigenous people, however, do not possess an identity card, explained Anggraini.

"They are considered ineligible to sign up for the vaccination because they cannot show ID cards, and their identities are also not in the administration database of the villages where they live in," she said. Anggraini suggested that authorities replace the identity card with verbal acknowledgment from tribal leaders in order to clear people's identity for vaccination.

"Access to vaccination should be opened as widely as possible to Indigenous people," she said.

Daisy Indira Yasmine, a sociologist from the University of Indonesia, also urged the government to remove mandatory identity card display amid the pandemic.

"Bear in mind that the coronavirus does not infect people based on an identity card. Anyone can contract COVID-19 and infect others," Yasmine told DW.

COVID: Indonesian doctors struggle to keep up with plasma demand

Securing access to modern health care facilities has been a longstanding problem for most Indigenous villages in Indonesia.

AMAN has been calling on communities to impose a mini-lockdown since March 2020. Baduy Dalam tribe in West Java Province is one of the groups that heeded the advice.

But not all Indigenous communities could impose a lockdown. Many no longer have control over sections of their customary land due to mining or plantation operations.

The East Barito regency, where members of the Dayak Maayan, Dayak Lawangan and Dayak Dusun tribes live, has been listed as a COVID-19 red zone after many people tested positive for the disease.

"As Indigenous people here no longer have (exclusive) access to their land, they cannot stop activities (carried out by the government and companies). They also cannot ask (workers of mining and plantations) to leave the land," said Anggraini, adding that most Indigenous people in the area contracted the virus from their interaction with employees of mining and palm oil companies.

Indigenous people from isolated tribes, such as Baduy Dalam in Banten, Kajang Dalam in South Sulawesi and Tobelo Dalam in North Maluku, should not be ignored in the country's inoculation scheme, said Anggraini.

According to her, the government should take a more proactive role by sending health workers to remote Indigenous communities to administer the jabs, instead of expecting them to leave their settlements and travel to vaccination centers.

"(To approach the communities of isolated tribes) requires a method that is sensitive to the culture that they observe," she said.