Indonesia celebrates as President Widodo heads towards victory | Asia| An in-depth look at news from across the continent | DW | 18.04.2019

After a politically charged campaign season, Indonesia has pulled off one of the world's most complicated democratic exercises. Clare Richardson reports from Jakarta. 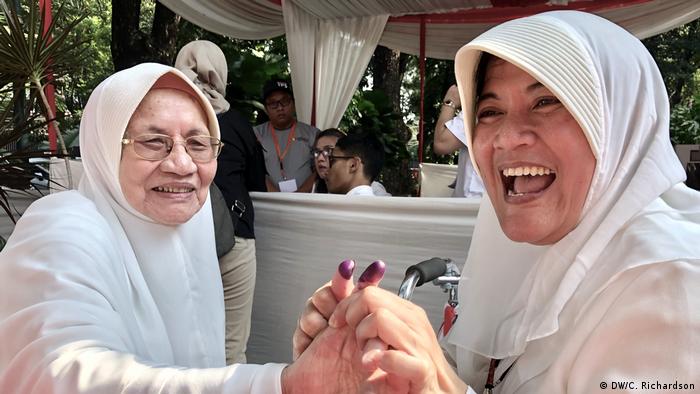 Only a celebration of this scope could clear the notoriously congested streets of Jakarta. At a polling station in the district of Menteng on election day, a live band struck up a rendition of La Bamba, voters held up inky purple fingers to pose for photos, and families brought food to enjoy on their day off from work.

The head of the polling station had been at the scene since 6 in the morning, organizing ballot boxes under red-and-white tents set up in a public park.

"I think everybody is excited about this election," said election worker Suzanna Sampuaga. "Everybody is having fun — I love doing this."

Sampuaga was one of some 6 million election workers guiding voters through the process, which is more people than the population of Denmark.

The enthusiasm to vote reflected Indonesia's pride in pulling off one of the world's most complicated single-day elections, in which Indonesians voted for nearly a quarter million candidates at the presidential, legislative and local level. Despite concerns about hoaxes, suspected voting irregularities for overseas balloting, and a few glitches, the elections went smoothly. The General Elections Committee (KPU) announced a high participation level of nearly 78% of the 193 million eligible voters. 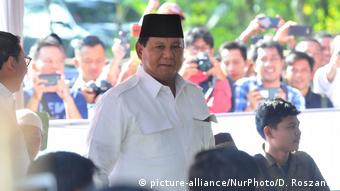 In Menteng, onlookers broke into a round of applause when the polls closed. When a team of international election observers arrived, poll workers carried out a performative display of counting the ballots, with more cheering as the results came out in overwhelming favor of the incumbent, President Widodo.

Irine Hiraswari Gayatri, a researcher at the Indonesian Institute of Sciences, traveled from Jakarta to her home in Tasikmalaya, in the province of West Java, to cast her ballot. "I witnessed major enthusiasm from people to vote," she told DW.

Tasikmalaya has been known as a stronghold for opposition leader and former army general Prabowo Subianto's Gerindra party, but Gayatri voted for Widodo, along with the majority of people at her polling station.

"The rigorous campaign in these areas changed the game," she told DW. Shortly after polls closed, Subianto rejected claims that President Widodo had won the elections.

Although voting day went off with few hitches, there were still mishaps at 2,249 out of 810,000 polling stations, according to the election committee. 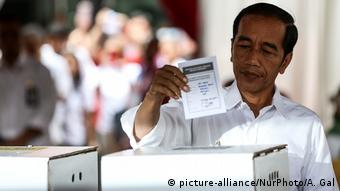 President Widodo looks set to win this time around too

Ruby Khalifah, the secretary general of the division of women under Bravo 5, one of the biggest organizations supporting Widodo, ran a hotline for voters to report problems on election day.

She said the biggest problem was lack of knowledge about the new voting system based on electronic ID cards. Voters living in a different city than where they were registered were required to submit paperwork in advance, but Khalifah found not all voters were aware of this step. Many were angry when they were turned away from the polls.

"They wanted to be active citizens, to take the opportunity to vote in 2019," she told DW.

However, Khalifah added that most voting went well.  "Women volunteers worked very hard to make sure every citizen received correct information so that they could vote for the right person," she said.

Indonesia is a Muslim-majority country and the third-largest democracy in the world. The country boasts the largest economy in Southeast Asia and its free and fair elections previously have been hailed as a role model for democracy in a region that often favors authoritarianism. More than two decades after the end of the autocratic rule of President Suharto, Indonesians are continuing to engage in open discussions about their political future.

Yet this election was also a test of whether Indonesia would continue down the road of embracing pluralistic views or move toward promoting Islamization of the state. While the constitution guarantees freedom of religion, a bitter form of identity politics has reared its head in the years since the last presidential elections.

Widodo beat Subianto for the presidency when the two ran against each other five years ago. He came into office with a reputation for being a man of the people, riding a wave of optimism that he would be a defender of secularism.

Since then, he has tried to outmaneuver his critics by embracing conservative Islam and the hardline clerics who have sought to bring religion into politics in Indonesia. Widodo's choice of Ma'ruf Amin as a running mate, one of the nation's most powerful clerics who has called for the imposition of Shariah law, was an effort to shore up his religious credentials.

Nyarwi Ahmad, a senior lecturer in political communication at Gadjah Mada University, said the lack of a strong economic foundation in Indonesia, and the increasing importance of religious leaders as political actors, made it easy for candidates to formulate a discourse based on Islam.

"Identity politics in Indonesia will become the main issue for the next couple of decades," he told DW.

At the end of election day, as a quick count from pollsters showed Widodo with a comfortable lead — albeit narrower than he had hoped — Jakartans paraded down a main thoroughfare on Imam Bonjol street on motorbikes, waving Indonesian flags. When they cleared out of the way, the traffic resumed, extending the appearance of business as usual in Indonesia.