Unofficial results from the presidential polls place Indonesia's Joko Widodo well ahead of his rival, former-general Prabowo Subianto. However, Subianto declared victory and announced a rally in Jakarta. 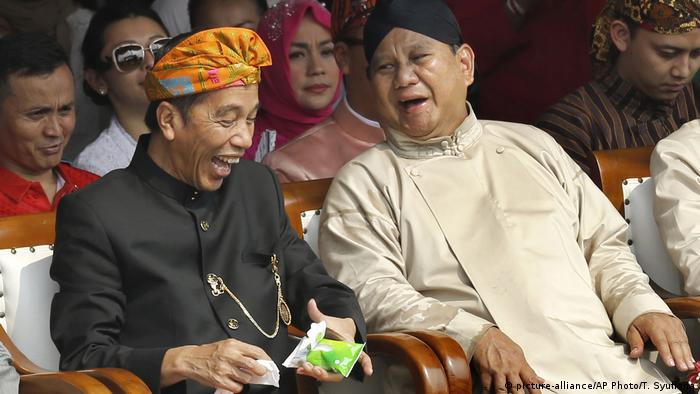 Indonesian President Joko Widodo is projected to keep his post according to the unofficial resultsfrom Wednesday's vote, which gave him an advantage of between 7.1 and 11.6% over former military commander Prabowo Subianto.

But the ex-general insisted he was the real winner of the vote.

"We will not use illegal tactics because we have won," Subianto said, pledging to be "the president of all Indonesians."

Subianto, who is a former son-in-law of ousted military strongman Suharto, said his aides reported him winning between 52% and 54% of the vote, putting him ahead of Widodo. He also said there were "several incidents that have harmed the supporters" of his campaign.

"The truth will win," he added.

Official results will take weeks in the nation which spans over 17,000 islands and boasts a 264-million population. However, a combination of exit polls and so-called "quick counts" or publicly tallied votes shows Widodo hovering around 54 percent.

Widodo addressed a group of cheering supporters in Jakarta, but held off on claiming victory.

"We've all seen exit poll and quick count numbers, but we still need to wait for the official results" which are to arrive in May, he said.

The latest dispute between Subianto and Widodo closely echoes the standoff after the 2014 election, which saw the same two men vying for the top job. In 2014, Subianto also claimed victory on election day and subsequently disputed the official results before the country's Constitutional Court. The court rejected his motion and sided with Widodo.

In the run-up to the latest election, Subianto's team claimed to find irregularities in lists that could affect millions of voters. They also pledged "people power" action if their concerns were ignored.

Subianto's spokesman Ferdinand Hutahaen emphasized that the campaign would not organize violent unrest.

"There will be no burning, killing," he told reporters. "We don't want conflict in this country."

Subianto's supporters are set to rally in Jakarta on Friday.