″Indignant″ protesters converge on Madrid in national show of strength | Europe | News and current affairs from around the continent | DW | 24.07.2011

"Indignant" protesters converge on Madrid in national show of strength

Protesters from across Spain have converged in Madrid to show frustration over the country's economic woes. Months after the height of demonstrations, activists have established a permanent presence in the capital. 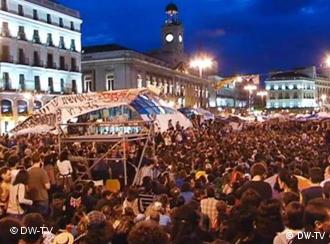 Thousands gathered at the height of the protests in May

Two months after the country's "indignant" protests saw the Puerta del Sol square filled with tents, Madrid once again became a focus for demonstration on Sunday.

Thousands of people from across Spain converged on the city to voice their dismay over high unemployment, which stands at more than 20 percent, and a perceived lack of policies to address the economic crisis.

More than 500 protesters who marched on foot for weeks from across Spain were joined by participants who arrived by bus and train at the Puerta del Sol square.

The square is recognized as the geographic center of Spain, with all road distances measured from a point there known as "kilometer zero." It is no coincidence therefore, that protesters chose this place to demonstrate their unity in opposing a political system they believe has failed them.

"Cutbacks for the rich first" and "People of Europe rise up" were among the placards on display on Sunday. Activists say they are disappointed by the policies of Socialist Prime Minister Jose Luis Rodriguez Zapatero and the conservative opposition Popular Party.

The protest has had a permanent presence in the square since May, with activists becoming increasingly organized and garnering some popular support, as protester Angela Risciotti explained to Deutsche Welle.

"The square may not be full but we are still here," said Risciotti. "We are not taking money. We ask only for food, water and the people give them to us. People come and they ask what we need and if they can help us. It works like this."

A list of activities is taped to the side of the protesters' base - a large professionally-constructed wooden tunnel covered in plastic sheeting. Events include open-air suppers, workshops and the assemblies. Instead of loudly clapping or jeering speakers, Spaniards have adopted a system of hand gestures to express agreement or dissatisfaction with what is being said about a wide range of political issues.

"Every day we have an assembly," said Risciotti. "Every day we make a program because we have to take some decision. We have seen in these months that this system is working because the people speak, and we think and we take a decision together. This is good, this is democracy."

Among the passers-by ahead of the protests was 82-year-old Paco Beltran, who wanted to show support for the protesters. 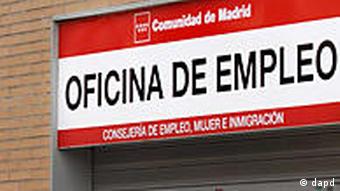 Almost half of Spain's under-25s are without a job

"I'm in complete agreement," said Beltran. "I don't live here, I live on the coast but I've come here to visit them and show a bit of solidarity for them because I believe we should show more unity."

Some, like Madrid resident Christina Lopez, sympathize but believe it is time for protesters to leave the square and take their tents with them.

"I think that, to some degree, it is right and very important what they are doing - but I think that some people are taking advantage of this situation in general. I don't like this. I don't like what's happened to the Puerta del Sol. At first yes, but now I don't. It looks as though we are in the third world."

Another protest - for activists from around the world - is planned for August as protesters build alliances with groups abroad. Nobody is sure quite how long the indignants will maintain a presence in Puerta del Sol, but it is certain that - for now at least - they are in no hurry to leave.

The May 15 movement has started to move out of the squares from where it shook up Spanish politics last month. But now it has the daunting task of pursuing some ambitious long-term objectives. (07.06.2011)