India′s main opposition attempts overhaul amid leadership crises | Asia | An in-depth look at news from across the continent | DW | 12.10.2021

The ruling BJP party has been left without any serious challengers to its power as the Indian National Congress faces a leadership crisis in several states. 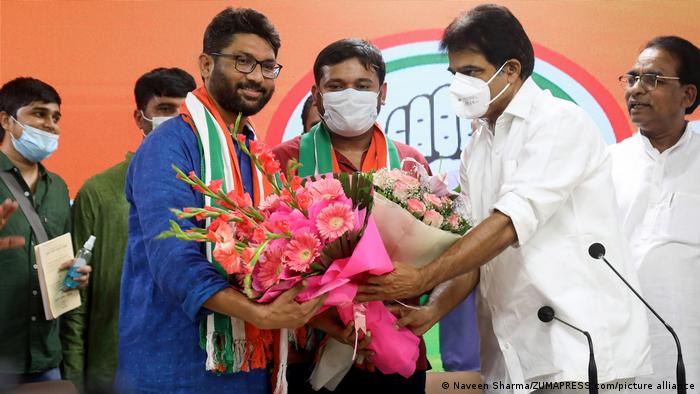 The Indian National Congress, often referred to as the "grand old party of India,"
is set to have a high-level meeting on Saturday.  The agenda is clear: to find a new chief to invigorate the country's main opposition party.

The Congress — which held power for more than 50 of independent India's 74 years — secured fewer than 10% of Parliament seats in the 2019 general election, which saw Prime Minister Narendra Modi's Bharatiya Janata Party (BJP) secure a resounding victory.

The Congress has been grappling with leadership crises in several states, allowing the BJP to rule without any real political threats.

The ailing opposition party, which previously played a pivotal rule in India's struggle to gain freedom from British colonial rule, is now looking to overcome its hurdles by adapting to the concept of a "new India."

The northern state of Punjab is an important stronghold for the Congress. The state is also the epicenter of India's massive farmer protests, which have been viewed as the biggest challenge to the Modi government since it took power in 2014.

Under Chief Minister Amarinder Singh, the Congress was expected to maintain its stronghold in Punjab as it went to the polls next year.

Intense infighting, an unexpected resignation and a major upheaval of leadership in the state, left the party in shambles. Singh resigned as Punjab's chief minister.

Similar crises were also witnessed in states such as Madhya Pradesh, which saw an elected Congress government fall after the party leadership in New Delhi ignored young regional leaders, including Jyotiraditya Scindia.

No threats to BJP power

As Congress struggles to overcome its own internal battles, the BJP has been left without any serious challengers to its power, prompting many to ask: "If not Modi, then who?"

Though Congress does not seem to be in a position to offer an alternative leader, the party has set the goal of improving its electoral performance in Uttar Pradesh next year.

Modi and the BJP have already been aggressively campaigning in the northern state, which goes to the polls next year.

Why are agitating farmers in India publishing their own newspaper?

Earlier in October, the BJP came under fire for  violence in the state's Lakhimpur Kheri district, where at least four farmers were killed when a vehicle that reportedly belonged to a junior minister in Modi's Cabinet ran over a crowd of protesting farmers.

Days after the tragedy, Modi visited Lucknow — 130 kilometers (80 miles) from the site of the incident — and hailed Adityanath's leadership in the state, but did not mention the farmers who lost their lives.

Senior Congress leaders lashed out at Modi, accusing him of ignoring the farmers' plight. But the Congress has also come under fire for politicizing the violence.

"People looking for a quick, spontaneous revival of Congress-led opposition based on the Lakhimpur Kheri incident are setting themselves up for a big disappointment," political strategist Prashant Kishor said.

"Unfortunately there are no quick-fix solutions to the deep-rooted problems and structural weakness of the Congress," Kishor said.

Now, Congress is attempting to revamp its image and challenge the BJP by inducting popular young leaders such as Kanhaiya Kumar and Jignesh Mevani, both vocal critics of the ruling party.

A student leader, Kumar rose to fame in 2016, when he was arrested on charges of sedition. Though the charges were not proven, Kumar was viewed as an icon of free speech by the government's critics.

Mevani is a lawyer, activist and former journalist who challenged the BJP in its stronghold of Gujarat. An independent member of the state assembly, Mevani joined the Congress with Kumar late last month.

The party welcomed the two and told reporters that Congress looked forward to working with them "to defeat the fundamentalist forces of the country that are ruling India."

Earlier, a member of former Congress leaser Rahul Gandhi's team told DW on condition of anonymity that the party leadership was looking to induct members with "aggressive attitudes."

They may be older, loyal members of the Congress, or recent transfers from an opposing party. The most important factors are aggression and a belief in strengthening the party, the source said.

Analysts remain skeptical that the entrance of new leaders would revamp the Congress.

"Young leaders like Kumar and Mevani, however good they may be, cannot make a significant difference to the Congress' fate," political analyst Arati Jerath told DW.

"Until the Gandhi siblings are able to make the necessary organizational changes, the Congress is not going to see any great revival of its fortunes in the near future," she added, referring to party leader Sonia Gandhi’s two children: Rahul Gandhi and Priyanka Gandhi Vadra.

Jerath said the BJP was counting on Congress' leadership crisis as it prepares for the next big election, in 2024.

"Till the Congress shows signs of revival, the BJP feels it doesn't have much to fear from the party," she said. "But two or three years is a long time in politics."