Indian veterans back in dangerous waters to fight pirates | Business | Economy and finance news from a German perspective | DW | 18.07.2019

Indian veterans back in dangerous waters to fight pirates 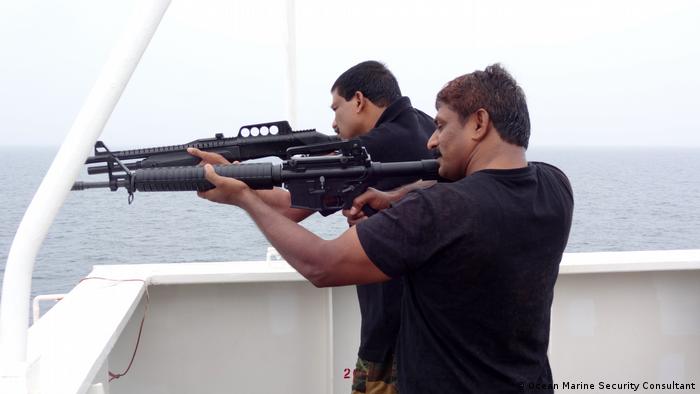 That confrontation with Somali pirates still sends shivers down Abdul Razack's spine. It was a close shave for the former Indian Navy sailor.

Razack and his team of former Indian veterans were manning an oil tanker in the Red Sea off the coast of Somalia in 2013, when they came under attack from pirates.

The buccaneers relentlessly pursued the tanker, unfazed by several rounds of warning gunshots. As the chase went on, Razack's team was fast running out of ammunition. But as luck would have it, the pirates gave up their pursuit, knowing little that the guards and crew onboard the tanker were just short of becoming sitting ducks.

"We feared for our lives," Razack said. "Had the pirates not left, we would have been dead."

Razack today runs a hiring firm that supplies Indian veterans to global maritime security firms, which are turning to Asia for lower-paid guards to drive down costs in a crowded industry that is struggling amid a decline in piracy off the coast of Somalia.

The demand for cheap labor has provided Indian armed forces veterans with a lucrative path back to civilian life. Indian guards with over 15 years of experience in the forces can earn as much as five times their last drawn salaries in the military — remunerations attractive enough for them to embark on a risky second innings.

"There was always a threat to life. We did not know we would come back to India or not. My family was worried for me," Razack told DW. "But the salary was enough to convince my family. They understood that the high risk came with the promise of a higher salary." 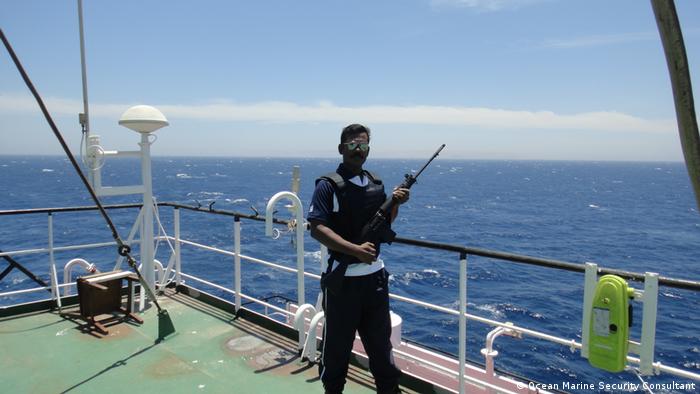 Razack says his recruitment firm has placed 1,500 Indian veterans in the maritime security industry over the past few years

Private maritime security firms mushroomed in the late 2000s, when piracy off the Horn of Africa was at its peak. They supplied security teams to secure ships traversing the dangerous waters. The guards were drawn predominantly from elite military units in the UK, the US and Greece.

As the industry became more crowded, the smaller players started hiring lower-paid guards from India, Sri Lanka and other Asian countries to remain competitive. In most cases, these guards lacked the experience and expertise of their Western peers.

"These smaller companies that were driving the 'price wars' introduced to the industry the whole Asian game," said Dimitris Maniatis, chief commercial officer of Diaplous, one of the largest private maritime security firms. "Each and every company tried to find an agent who could supply them guards at the lowest possible rate."

Soon the bigger firms, including Diaplous, also joined the bandwagon to avoid being priced out of an industry that within 4 years of its inception had nearly 500 companies. Many of the companies have since folded up, unable to survive the competition amid a fall in piracy off the coast of Somalia.

Piracy remains rampant in the Gulf of Guinea, off the West African coast.

The pursuit of cheap labor has brought about a drastic demographic change in the workforce. Nearly two-thirds of the guards employed by the industry today are Asians, including Nepalese, Burmese and Filipinos.

The shipping companies hiring their services ensure they are served their local food. The only exceptions are firms from China, which only serve Chinese meals.

The Asian guards are paid less than half the salaries drawn by their Western peers. An experienced team leader from the West would earn around $4,500 (€3,600) per month, while his Indian counterpart would make around $2,000.

A Western newbie would get paid around $1,600 per month, while a new Indian guard would receive $750 per month, minus the job agent's commission.

"I don't believe that nationals coming from countries that require lower monthly salaries are of lesser quality because of their nationality," Maniatis told DW.

"India, for example, has a brilliant navy and excellent officer academies. These people come with a wealth of knowledge on marine operations, on vessel operations, on maritime security, on interaction with naval assets in the region. They also understand patterns of life at sea and don't mistake fishermen for pirates, for example," he said.

More than a third of the guards at Diaplous, which means "sea passage" in Greek, are from India, while another 10% are from Sri Lanka.

Maniatis stressed that his company does not employ Gurkhas from Nepal, unlike many British firms. Gurkha soldiers are an integral part of the British army and are known for their valor. "We don't understand how a mountainous people from a landlocked country could operate onboard a vessel sailing on the high seas," he said.

Despite a rise in demand following attacks on oil tankers in the Gulf of Oman last month, many maritime security firms are struggling to stay afloat.

Several of them are not even hiring any guards, instead they are simply leasing them from recruitment firms to cut corners.

"This is alarming, extremely dangerous for the operation and the industry as whole," said Maniatis. "They do not have any training. They lack understanding of the standard operating procedures of the company hiring them and they do not have proper certification when it comes to the weapons they would be using."

The African Union has adopted a charter to raise security off the continent's economically key coasts. Piracy and illegal fishing have cost the maritime industry billions of dollars in recent decades, the AU said. (16.10.2016)