At least 10 people have been killed after a four-story residential building collapsed. Rescuers are working to try and free dozens of people feared trapped. 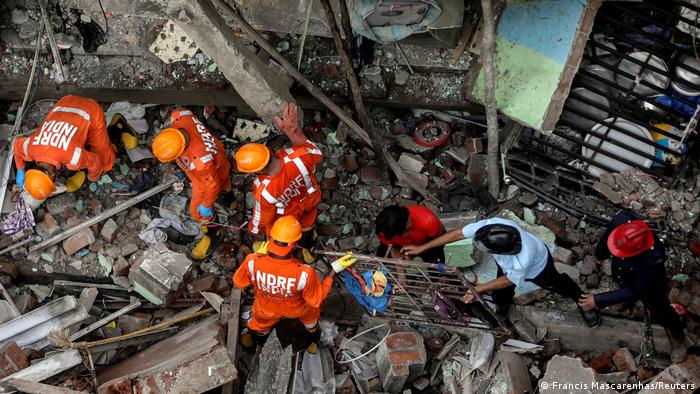 At least 10 people are dead and 25 feared trapped after a residential building collapsed near Mumbai on Monday, officials said.

Pankaj Ashiya, the commissioner of the city of Bhiwandi in Thane district, said the building was over 30 years old and needed repairs, which couldn't be carried out due to the coronavirus lockdown.

More than 40 emergency workers had arrived at the scene, an official said, including a team of 30 rescuers from the National Disaster Response Force.

Photos posted to the NDRF's Twitter page showed emergency workers combing through concrete and brick rubble with electrical wires hanging over their heads.

Indian Prime Minister Narendra Modi expressed his condolences on Twitter. "Praying for a quick recovery of those injured. Rescue operations are underway and all possible assistance is being provided to the affected."

Building collapses are common in India during the June-September monsoon season, when heavy rains weaken the foundations of poorly constructed and old structures. Last month, more than a dozen people were killed when a building collapsed in the industrial town of Mahad, 165 kilometers (100 miles) south of Mumbai.