Hundreds of people fell ill from a mystery illness in a southern Indian town. Traces of heavy metals have now been found. 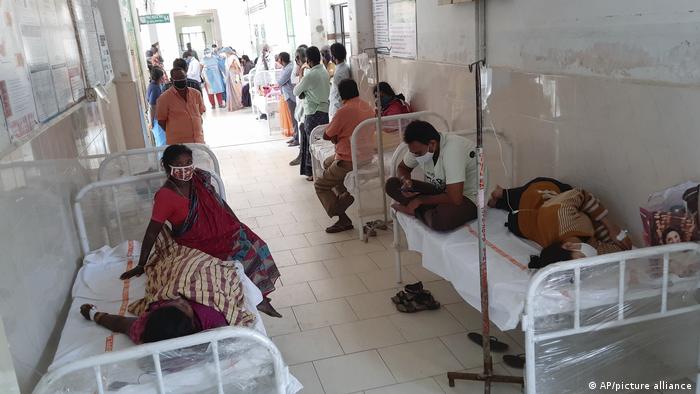 Doctors found traces of nickel and lead in patients on Tuesday after hundreds of people were afflicted with a mystery illness in a south Indian town.

At least 555 people have been treated after people started collapsing in the street in the town of Eluru in Andhra Pradesh state on Saturday.

The government rushed medical experts to the town of 20,000 people to investigate the cause.

"Some people are saying that it is mass hysteria but it is not," A.S. Ram, a senior doctor at the government hospital told AFP news agency.

"Most of the patients are coming in with minor head injuries or a black eye as they collapsed suddenly with the seizure," Ram said. "But within one or two hours most of them are fine."

One man died after experiencing seizures, nausea and chronic pain.

More than 300 children have been affected, with most of them suffering from dizziness, fainting spells, headaches and vomiting. They tested negative for COVID-19.

Blood samples from 10 patients revealed high levels of lead and nickel, Eluru Government Hospital chief A.V. Mohan said. However, the sample size was still too small to be sure that the heavy metals are the cause.

An inquiry has been launched to find the source of the metals and how they were spread.

There are no major chemical factories in the region, and tests have already been carried on the water supply and milk. Experts from national medical institutes were also carrying out tests on edible oil, rice and urine.

District officials say chemical additives in pesticides may have played a role. And federal lawmaker GVL Narasimha Rao, who comes from the state,  said he had spoken with government health experts and the "most likely cause is poisonous organochlorine substances."

Organochlorines have been linked to cancer and are banned in many countries. Exposure to them can cause convulsions, headache, dizziness, nausea, vomiting, tremors, confusion, muscle weakness, slurred speech, salivation and sweating.

Health workers in Delhi are struggling to cope with a record spike in COVID-19 cases. The federal government has had to enlist medical students to help bring the surge under control.

One doctor in India gave many of her HIV/AIDs patients hope by helping them find partners. More than two million Indians are HIV positive. Many conceal their illness because of the stigma.

Russian gas and oil are by far the most significant exports Moscow sells to Germany. Yet other important raw materials are also under the spotlight because of the war in Ukraine.

Mounting levels of custodial deaths in India are alarming citizens and advocates alike. Experts say violations of laws against custodial torture are commonplace and that many police consider violence a legitimate tool.