India: Dozens of bodies recovered after barge sinks during cyclone

The search for people onboard a barge that sank during a massive cyclone in India has entered the third day. Bodies of 37 people have been recovered in the operation so far. 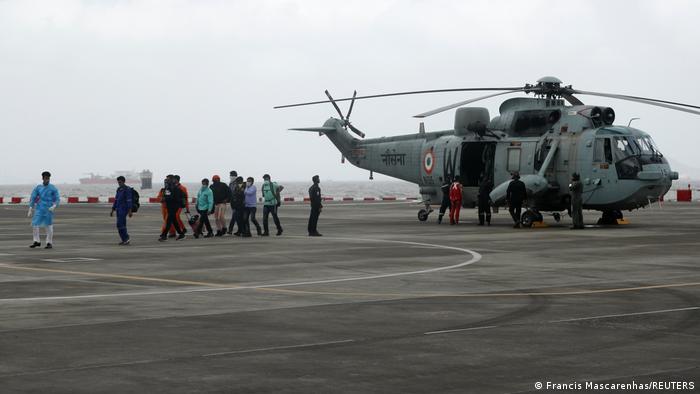 The Indian Navy scoured waters through the night to recover bodies of 37 people who were onboard a barge that sank off Mumbai as a cyclone ravaged the country's west coast.

"Search and rescue (SAR) operations off Mumbai and Gujarat entered their third day today. Indian Naval ships and aircraft are presently undertaking SAR of the missing crew members of accommodation barge P-305, which sank on May 17, 35 miles off Mumbai," a navy spokesperson said in a statement.

The barge was deployed on contract by state-run energy explorer Oil and Natural Gas Corporation (ONGC) to carry people engaged for offshore drilling.

It had 261 people onboard when it sank after the Cyclone Tauktae barreled into the Bombay High oilfield near Mumbai.

Cyclone Tauktae, which hit the western states of Gujarat and Maharashtra on Monday, is the strongest storm the region has seen in decades. It has killed at least 62 more people over the past two days.

Meanwhile, a major new storm is building off India's east coast in the Bay of Bengal, weather forecasters warned on Thursday.

The system was "very likely" to intensify gradually into a cyclone, which is projected to hit the coasts of the states of West Bengal and Odisha around May 26.

The damage from Cyclone Tauktae has added further pressure on a country that is battling a deadly second wave of the coronavirus amid a shortage of beds and oxygen in medical facilities.

The former chairman of Tata Sons was traveling from Gujarat to Mumbai with three others. He is survived by his wife and two sons.