The Saudi ambassador has been urged to cooperate with India over allegations that one of his diplomats sexually assaulted and imprisoned two Nepali maids. Protests have broken out in India's capital over the claims. 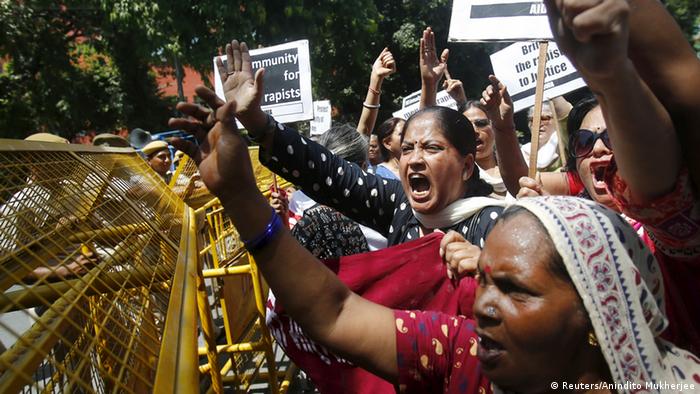 The two women, aged 30 and 50, told police that recruiting agents lured them from their homes in Nepal under the promise of higher wages. They were hired and supplied to the Saudi diplomat in April. Police rescued the women on Monday after a third maid saw their condition and informed a local NGO.

"They raped us, kept us locked up, did not give us anything to eat...When we tried to run away, we were beaten up," one of the women told to the NDTV network. She added that they had been held at the apartment near New Delhi for around four months.

The accused diplomat in the suspected rape case has since claimed diplomatic immunity and the Saudi embassy is urging India to drop the case.

According to Indian media outlets, the Saudi embassy has denied the accusations, saying it "strongly stresses that these allegations are false and have not been proven." Saudi Arabia also claims that Indian police broke international conventions by entering a diplomatic property.

India's foreign ministry "conveyed [a] request to Ambassador Saud Mohammed Alsati on Thursday, however, asking for his cooperation "in the case of two Nepali citizens," ministry spokeman Vikas Swarup said on Twitter.

Indian police also said on Wednesday that they were pushing ahead with the investigation.

The charges have created diplomatic tensions between the two countries ahead of Indian Prime Minister Narendra Modi's planned state visit to Saudi Arabia later this year. Modi will seek to secure an investment from the rich, oil state and to expand in the energy sector.

Crowds were also seeing protests outside the Saudi Arabian embassy in New Delhi on Thursday in response to allegations.

A Delhi student's Facebook post of a man, who allegedly harassed her, went viral and has resulted in the arrest of the accused. DW spoke to Delhi's women commission chief about the rising levels of crime against women. (26.08.2015)

Many women and children affected by the devastating Nepal quakes have also been subject to sexual and domestic violence. Post-disaster, the nation has become a breeding ground for traffickers, as Murali Krishnan reports. (22.07.2015)

Villagers in India's eastern state of Jharkhand have killed five women, accusing them of being witches. Over two dozen people have been arrested in the case. (08.08.2015)