Several people have died and thousands more have fallen sick after a gas leak at a chemical plant in southeastern India. Many near the site fainted, others reported burning eyes and difficulty in breathing. 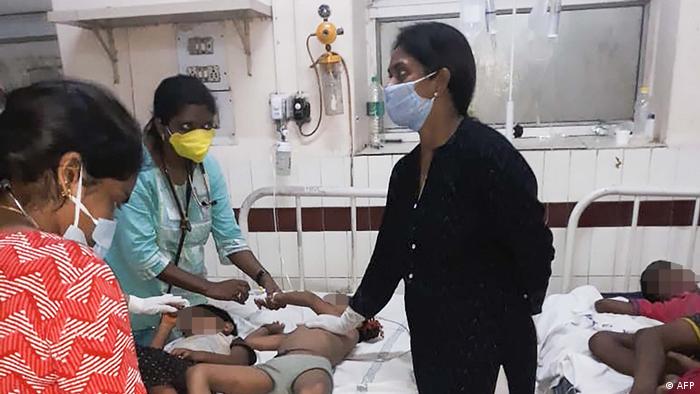 A gas leak at an LG Polymers facility on the southeast coast of India killed at least 11 people, police said Thursday. The accident happened at a village near Visakhapatnam in Andhra Pradesh state.

One of the dead is believed to be a child. There were reports of some people fainting near the site.

"Rescue workers found people lying unconscious in ditches and roadsides," said local police chief Gautam Sarang. "One of those who died fell in a well."

He confirmed that at least 800 people were taken to hospital and were made ill by the gas. More than 3,000 people living in nearby villages have been evacuated.

The silo was later plugged by India’s National Disaster Response Force, with their director-general, SN Pradham, saying "The situation is under control."

However, on Friday, a fire official told news agency Reuters that the facility had begun leaking again, less than 24 hours after the initial incident.

Administrator Vinay Chand said styrene, a synthetic chemical was believed to have leaked from the chemical plant. The chemicals may have leaked following a fire that began while workers were preparing to restart the plant after it closed during India's coronavirus lockdown.

The accident was reported at around 3:30 a.m. local time.

"As it was still early in the morning, there are people who were sleeping in their homes and are now unconscious," said district hospitals coordinator B. K. Naik. Patients were forced to share beds in the King George Hospital in Visakhapatnam, AFP news agency reported.

People within an area of 3 kilometers were affected.

"Hundreds of people have inhaled it and either fell unconscious or have breathing issues," Srijana Gummalla, Commissioner of the Greater Visakhapatnam Municipal Corporation, wrote on Twitter.

Authorities deployed 25 ambulances to the scene and evacuated surrounding villages.

LG Chem, the South Korean chemical company that owns the plant, said the gas leak has since been "brought under control."

"We are investigating the extent of damage and exact cause of the leak and deaths," they said in a statement.

The company confirmed that the gas emitted in the leak can cause nausea and dizziness and that it was working to ensure casualties received treatment quickly.

The COVID-19 pandemic is putting huge pressure on the already-fragile health care system in the Indian state. Poor planning, a lack of protective equipment and low public awareness are exacerbating the challenge. (08.04.2020)

How Kashmir is trapped by a 'killer highway'

The Srinagar-Jammu National Highway connecting the Kashmir valley to the outside world is one of the most treacherous roads in South Asia. In 2019, more people died on the highway than in Kashmir's regional conflict. (05.05.2020)