A left-wing alliance has rejected a program proposed by Portuguese Prime Minister Coelho, forcing the government to resign after only 11 days in power. The opposition plans to reverse pay and pensions cuts. 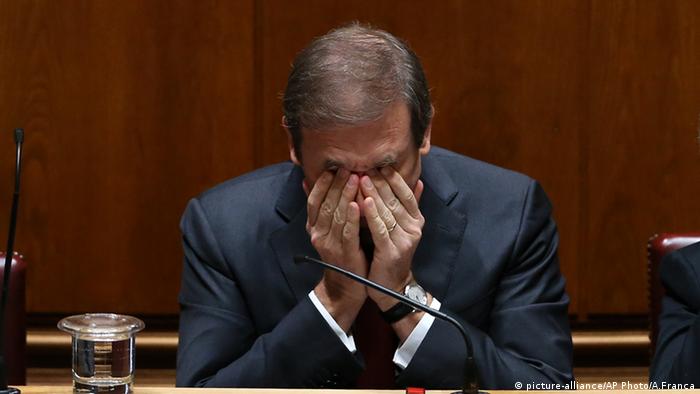 Portugal's Socialist Party forged an unprecedented pact with the Communist Party and the radical Left Bloc to take down the center-right government of Minister Pedro Passos Coelho in a parliamentary vote on Tuesday.

The no-confidence motion drafted by the Socialists garnered 123 of 230 votes.

Prime Minister Coelho won the most votes during the parliamentary elections in October, but lost the absolute majority his coalition had held since 2011. Still, following the country's political conventions, he was sworn back into office last week by the president.

Tuesday's vote makes his new administration the most short-lived in Portugal's history.

"The taboo has ended, the wall has been broken,"said Socialist leader Antonio Costa.

If the leftist alliance forms a new government, it would be the first ruling coalition to include the Communists and the Left Bloc in the modern political history of Portugal. The country only returned to democracy in 1974, after decades of right-wing dictatorship.

Portugal's president, Anibal Cavaco Silvo, must first meet with party representatives before any change to the government can take place. Until then, the prime minister will remain in power.

Portugal requested a 78-billion-euro ($88-billion) bailout in 2011 and only left the scheme in May 2014, with the previous Coelho administration pushing through harsh budget cuts.

Austerity seemed to be showing its first results in 2015, with the economy growing 1.5 percent in the first half of this year compared to the same period last year. The unemployment rate has also fallen to around 12 percent, compared to 17.5 percent in early 2013.

The opposition, however, claims that austerity has hit the middle class too hard, and "destroyed millions of Portuguese lives," according to the Communist Party official Jeronimo de Sousa.

The opposition lawmakers intend to roll back tax cuts, as well as cuts in pay, pensions and public services. They also speculated about restoring several public holidays that were cut to boost productivity.

Greece as a cautionary tale

At the same time, the Socialist party has repeatedly stated they would keep in line with European budget rules.

"All the conditions have been met to ensure a stable, responsible, consistent and lasting government," Socialist Party leader Antonio Costa said late Sunday.

Many observers, however, fear that a left-wing government would bring instability to the markets and spook investors, damaging the fragile economic recovery.

Coelho's finance minister, Maria Luis Albuquerque, warned on Tuesday that failure to reduce the budget deficit could provoke an even more serious debt crisis and a new bailout.

"We don't need to imagine the consequences; it's enough to look at the recent experience of Greece and the cost of their attempt to end austerity ... More recession, more poverty, more jobless and more dependence on European and IMF lenders," she told the lawmakers.

Turmoil in Portugal could also boost the far-left in the neighboring Spain, where elections are set for the December 20.

The Socialist Party has urged its members to withhold support for the center-right's attempt at minority rule. A new vote and a growing divide over austerity policy are expected amid Portugal's postelection confusion. (23.10.2015)