In Nice, the French are starting to ask the difficult questions | Europe| News and current affairs from around the continent | DW | 17.07.2016

In Nice, the French are starting to ask the difficult questions

The Bastille Day attack in France has left people in shock, but more than that, in a state of despair. As more details about the attacker emerge, many are asking: "Why does it keep happening to us?" Dana Regev reports. 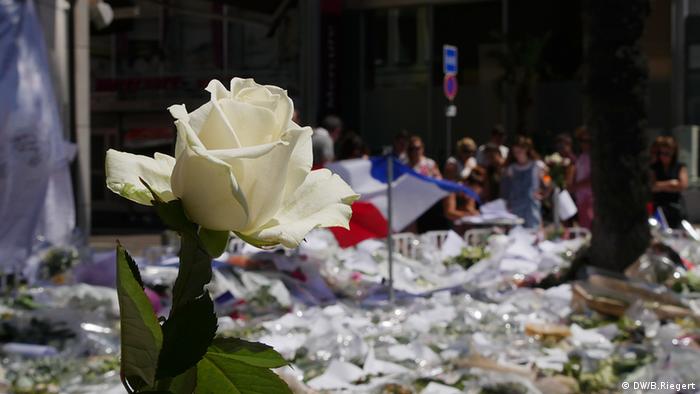 More and more French can be heard around the improvised memorials alongside the Promenade des Anglais in Nice, and less and less English.

The tourists and media are returning to their home countries, leaving the Mediterranean town and its residents to cope with the loss. But together with songs, hugs and prayers, the locals are also beginning to wonder about the nature of the attack that hit them just three days ago.

"Why does it keep happening to us, I don't understand?" a woman who lost a relative cried next to a pile of flowers and teddy bears. "What are we doing wrong?" she yelled in pain, and there was no one around her to answer her.

Nice: People get help in center for traumatized citizens

People in Nice get help in center for traumatized citizens

The memorials scattered along the promenade seemed to grow bigger and bigger every minute. Another bouquet of roses, another candle, another letter, another flag laid in solidarity.

But the cloudless sky, warming sun and clear water that usually bring thousands of visitors to the city could not compensate for the growing despair in people's eyes. "What do you mean, France needs to learn to live with terror," the woman wept, referring to French Prime Minister Manuel Valls' words on the day of the attack. "How can anyone simply live with that?" 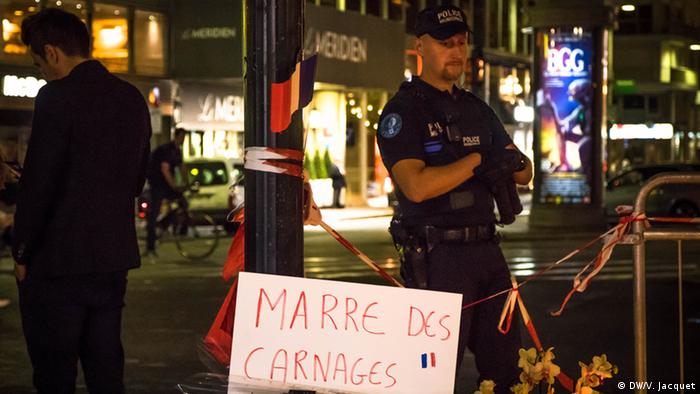 The sign roughly translates to 'enough of the carnage'

Revisiting a place of horror

The Bastille Day carnage claimed the lives of at least 84 people and wounded more than 200, including many tourists. About 85 people remained hospitalized Sunday, and of those, 18 including a child were still in a life-threatening condition.

A local police officer was giving away tissues as a small gesture of relief to the mourners. On Sunday there were a lot more tears than the day before. Some residents of Nice who were around the main square of the city confessed that it was the first time they had approached the area since the attack took place.

"The saddest thing of it all is that it feels like this could have been stopped so much earlier," Angelo Musumeci, a student who has lived in Nice for the past eight years, told DW. He was at the promenade on Thursday with his sister and her two children, but left minutes before the attack took place.

He was one of those who did not come back to the scene until Sunday. "I didn't want to have a different memory of the place I love so much. The promenade only looks the same, but it's not the same place anymore," he explained. "It would take a long time to restore people's true feeling of safety. This place has changed."

'We were not prepared'

Police arrested a man and a woman Sunday morning in connection with the truck attack and released the estranged wife of the 31-year-old attacker Mohamed Lahouaiej Bouhlel. But some are already saying police actions were too little, too late.

Nice mourns as reservists are recruited

Nice mourns as reservists are recruited

Many in France are angry at police and authorities for not preventing the deadly attack, even though France was under a state of emergency imposed after the "Islamic State" attacks last November in Paris.

"We were simply not prepared for this, no matter how you'd like to twist that fact," Musumeci said. "How else can you explain the fact that a person can drive two kilometers (1.2 miles) into the crowd without being stopped, not to mention his ridiculous excuse of carrying ice cream? [It has been reported by several media outlets that the attacker told police he was delivering ice cream. These reports, based on unnamed sources, have yet to be officially confirmed - the ed.] In such a significant event [the Bastille Day celebrations] you would expect police to be even more alert than usual. But that wasn't the case."

"I love this city so much. How can this magnificent view go with such tragedy," one mourner said. "All the police in the world could not stop a man with a truck or a knife," another Nice native said, expressing what many later agreed with. "We need to trace them before they do it, but this means changing everything we know. Everything."