IMF says it will continue to back Ukraine

IMF chief Christine Lagarde has reassured Ukraine that funds can still be made available even if the country fails to repay its private creditors. She ruled out resorting to national reserves to avoid defaulting. 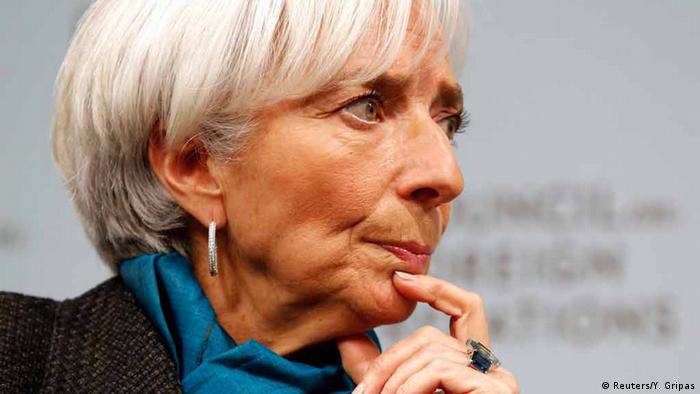 The International Monetary Fund (IMF) stated that it can continue backing Ukraine amid stalled negotiations between Kyiv and its private creditors.

Christine Lagarde, head of the Washington-based crisis lender, which had launched a four-year loan program of $17.5 billion (15.6 billion euros) in March for Ukraine's government, said that the IMF was still encouraging a settlement in the debt talks, while highlighting that there were backup options in place.

"But in the event that a negotiated settlement with private creditors is not reached and the country determines that it cannot service its debt, the fund can lend to Ukraine consistent with its lending-into-arrears policy," Lagarde explained.

"Rapid completion of the debt operation with high participation is vital for the success of the program, since Ukraine lacks the resources under the program to fully service its debts on the original terms."

Lagarde had met with Ukrainian Prime Minister Arseniy Yatsenyuk and Finance Minister Natalie Jaresko in Washington earlier this week to discuss economic developments and implementation of economic reforms. Bloomberg Business reported that Jaresko has now been in talks with private creditors for months, seeking a write-down of its debts from creditors who had only offered delayed payments.

"I believe that their program warrants the support of the international community, including the private sector, which is indispensable for the success of this program," Lagarde said. She stressed that the IMF did not have to cut off its funding of the Ukraine government if it stopped servicing its private debts.

Meanwhile Lagarde ruled out recent speculations saying that Ukraine could use its central bank reserves to pay back creditors. The reserves of the National Bank of Ukraine "cannot be used for sovereign debt service without the government incurring new debt," which she said ran against the aims of the IMF bailout program for the troubled country.

Ukraine had already received $5 billion from the IMF loan in March. The IMF board is expected to vote next month on another tranche of financing, for which Ukraine must still implement various scheduled economic reforms.

Ukraine has been in an economic crisis since the elected president fled to Russia in February 2014. A new government was elected a year ago and is fighting pro-Moscow separatists in the country's eastern regions.

Even as political leaders were negotiating a ceasefire for eastern Ukraine, the IMF has unveiled a new bailout package for Kyiv. The battle with the separatists has left Ukraine on the brink of bankruptcy. (12.02.2015)

An agreed humanitarian corridor to allow civilians escape the besieged city "did not work as planned," according to Kyiv, as a deadline to surrender put forward by Russia lapsed. Follow DW for the latest.