In a tribute to the Italian Renaissance master, the Bundeskunsthalle in Bonn takes its patrons through five centuries. This look at Michelangelo through other artists' eyes could be Germany's exhibition of the year. 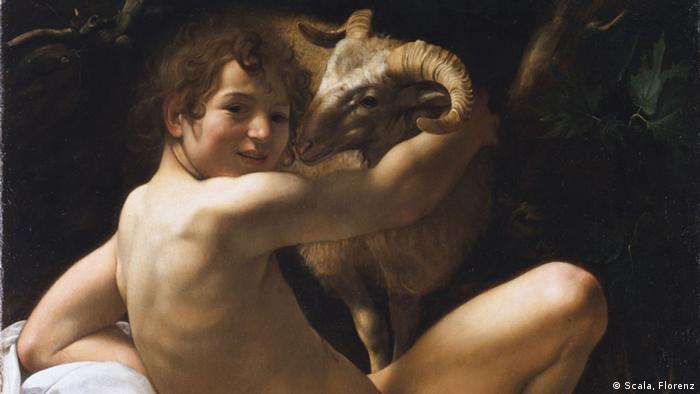 From Alessandro Allori to Federico Zuccari, an A to Z of prominent artists is going on display at the Bundeskunsthalle in Bonn, Germany. The Art and Exhibition Hall has gathered works ranging from contemporaries of Michelangelo (1475-1564) to present-day artists. Many are well-known names: Raphael, Caravaggio, Rubens, Rodin, Cezanne, Moore, Mapplethorpe.

The new exhibition "Il divino" examines how artists have admired, imitated or interpreted the Florentine master through the ages, producing a rich legacy of drawings, paintings, sculptures and films. Michelangelo's work as seen through the eyes of other artists is strange, new and diverse. But there's one thing that isn't on display at this Michelangelo exhibition - and that's Michelangelo.

"We show the legacy of the master," museum director Reinier Wolfs explained, "not the master himself." 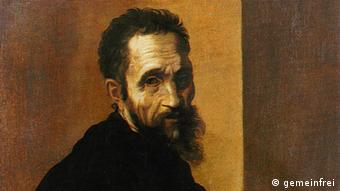 This shouldn't sound apologetic - nor does it have to be. "Il divino" could easily be Germany's exhibition of the year. It's seldom that so many masterpieces - themselves icons of art history - are brought together in a single show. Faraway museums and foundations reluctantly allowed their prized works to travel to Bonn, as did top galleries such as the Louvre in Paris, the Museum of Modern Art in New York and Vienna's Albertina. The exhibition has been five years in the making.

The loneliness of the genius

No artist before or since has ever earned Michelangelo's acclaim - as a sculptor, illustrator and painter. Yet for Michelangelo Buonarroti the man, it was a very different story. Chroniclers described him as deeply lonely and melancholic; some say he was repulsive, unsociable, avaricious, needlessly proud.

But he had a reputation as an ambitious, ceaselessly hard-working craftsman, almost possessed by his work. The son of the mayor of Caprese, a town in the upper Tiber valley, he lived modestly. On his dining table were bread, salted herrings and wine. He was hardly the gourmand. 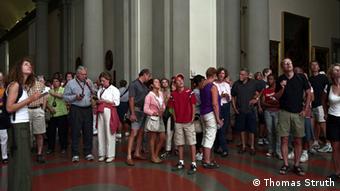 Michelangelo's artistic cosmos grew ceaselessly, inspired perhaps by a melancholy that some traced back to the early death of his mother. The human body was his instrument of worldly experience. He reared a vast repertoire of emotional expression. Inner states of tragedy, grief, love and faith touch us to this day, as do his dramas of suffering and struggle.

Not only for his fellow artists was Michelangelo's art a sensation. His admirers ranged from artisans to the art-loving Pope - something that has not changed since the Renaissance.

Indeed, through the centuries, artists have again and again rediscovered their enthusiasm for Michelangelo. Even during his lifetime, many copied or adapted his working methods and subjects. Caravaggio and Rubens created thematically related paintings, including Caravaggio's "John the Baptist" of 1602. Michelangelo's sculptures served as role models for Bernini's works. Raphael, in 1505-1508, sketched Michelangelo's David in front of the Palazzo Vecchio.

"Michelangelo's key works always had a large audience thanks to their prominent sites," curator Sebastian Schütze said. The Medici Chapel and the Piazza della Signoria in Florence, the Vatican Basilica and the Sistine Chapel in Rome were, and still are, well-visited places. 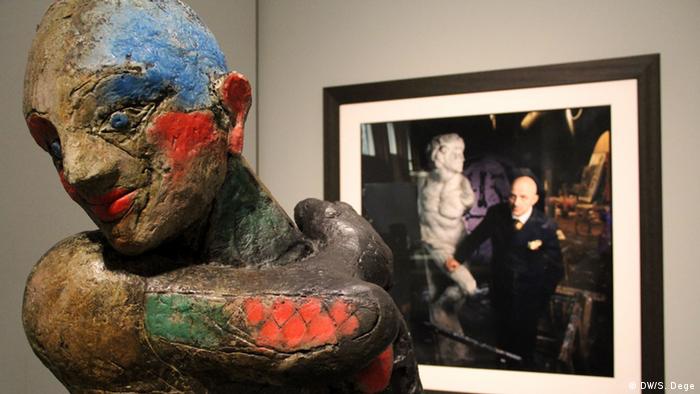 Sculptor Markus Lüpertz makes no secret of his debt to Michelangelo

No artist has been copied more often than Michelangelo. "His works were universally available due to the many reproductions," Schütz said, adding Michelangelo had an "unmatched media presence even during his lifetime." His work earned him the reputation "Il divino" - the divine artist.

From the Renaissance to eternity

Michelangelo's influence extended, for example, to sculpture of the 19th and 20th centuries. The Frenchmen Auguste Rodin and Henri Matisse and the German Wilhelm Lehmbruck all adored Michelangelo. Rodin's bronze male figure "The Age of Bronze," with his arm bent over his head, demonstrates this vividly. Henry Moore's modernist "Reclining Figure" also evinces Michelangelo's sense of proportion, while photographer Candida Höfer drew inspiration from Michelangelo's "David," capturing the sculpture on an expansive print in its home at the Accademia Firenze. Her colleague Thomas Struth took this a step further and took pictures of visitors as they marveled at the statue. The Florentine master was and is an artist for all times. 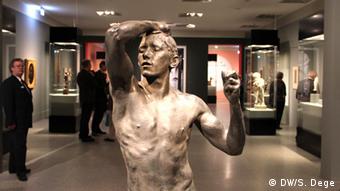 Rodin's 'The Age of Bronze' also borrows from Michelangelo's figures

The nakedness of Michelangelo's figures moves and inspires artists to this day: The late US photographer and artist Robert Mapplethorpe showed that in his series "Thomas," featuring a naked man in a circular frame. Painter and sculptor Markus Lüpertz's compositions owe much to the Florentine model, as do the works of young British filmmaker Sam Taylor-Johnson.

A walk through the exhibition in Bonn is like a tour through the history of art. Nearly everything that can be said about Michelangelo's life and work today seems to have been said. Few artists have been better researched. "We even know the color of the ceiling under which he died," second exhibition organizer Georg Satzinger said, "and we know his bank balance at the time."

But above all, what we know about Michelangelo is that his genius is unmatched - and has never lost its ability to inspire new artists.