Sigurdur Ingi Johannsson's Progressive Party suffered a severe battering in Saturday's general election. The Independence Party emerged as the top party and is expected to form the next coalition government. 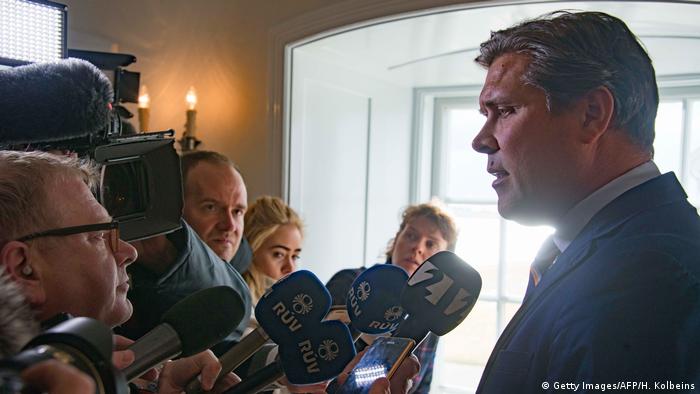 Iceland's center-right Independence Party on Sunday declared itself the winner of the country's general election.

With no party claiming a majority, leading parties were preparing to haggle over coalition arrangements. However, the Independence Party, which emerged as the top party with 21 seats, said on Sunday that it will lead efforts to form the country's next government.

"We have the most support ... So I'd say yes," Independence Party leader Bjarni Benediktsson said, when asked whether he considered his party the winner.

Iceland's Prime Minister Sigurdur Ingi Johannsson resigned on Sunday after his Progressive Party suffered a severe battering, losing 11 seats and dropping 13 percentage points. His party was rocked by revelations disclosed earlier this year in the "Panama Papers" of how his predecessor, Sigmundur Davíð Gunnlaugsson, had sheltered private funds offshore.

His resignation paves the way for a new ruling government.

Iceland is facing the prospect of tough coalition negotiations after the anti-establishment Pirate Party and its allies gained ground. Their failure to win a majority has left many voters disappointed, however. (30.10.2016)

Benediktsson added that he would prefer a three-party coalition, but refused to say with whom.

Iceland's president Gudni Johannesson has yet to hand over the mandate to the party that will be responsible for forming the government. However, outgoing Prime Minister Johannsson had said it would be "natural" for the president to hand the mandate to the Independence Party. The two met on Sunday in what was one of Johannesson's final acts as prime minister.

The anti-establishment Pirate Party, founded just four years ago by a group of activists and former hackers, gained significant ground, tripling its seat tally to 10 and reaping gains from popular anger towards the establishment parties.

However, the Pirates' final tally was lower than the party had hoped for. In April, the party was polling at around 40 percent. Early reports on Saturday suggested that it could take power in a left-leaning coalition with its three center-left allies.

Together, the coalition won 27 seats, not enough to upset the formation of a center-right coalition. Ultimately, it appears that Iceland's people have opted for stability.