Ice hockey: 'Stanley Cup is all that matters' for Germany's Leon Draisaitl

Last season, Leon Draisaitl won the National Hockey League's top three individual awards. The only thing left for him to achieve is the most difficult: to win the Stanley Cup.

Perhaps this has something to do with the fact that he is still just 25 – or maybe the fact that yet again in 2019-20, his Edmonton Oilers, long seen as the team of the future, failed to get anywhere near the Stanley Cup. When the National Hockey League (NHL) completed its COVID-19-disrupted season last summer, the Oilers were upset 3 games to 1 by Chicago in the playoff-qualifying round.

On the other hand, perhaps it has simply been easier for Draisaitl to look ahead – to a new year and a fresh NHL season. At the same time, though, 2020 was by no means just another year for the Cologne native.

A hat trick of individual awards

"Of course, I'm proud of what I've achieved, very happy about winning the awards," Draisaitl told DW, referring to the Art Ross Trophy as top scorer, the Hart Memorial Trophy as most valuable player (selected by members of the Professional Hockey Writers' Association), and the Ted Lindsay Award (selected by members of the NHL Players' Association), that he won last season.

Winning these awards elevated him to a different level on both sides of the Atlantic. The fact that the footballing nation of Germany chose a hockey player as its "Male Athlete of the Year" didn't go unnoticed in Canada, the birthplace of the game. This award in particular has made Draisaitl a household name in his own country – not only among hockey fans.

However, to understand the significance of winning this hat trick of Art Ross, Hart and Ted Lindsay trophies, you have to consider that Draisaitl was just the 11th player to do so since the NHL was established in 1917. His predecessors were six Canadians, two Russians, a Czech and an American – all players from established hockey-playing nations.

Draisaitl, on the other hand, first took to the ice in the lowest age group of the Cologne Sharks youth program – in a country that has just 20,000 registered players among a population of 82 million. In large part because he is a hockey player and not a football player, until now, he has mostly been able to go about his day-to-day business in anonymity – even in his hometown. But now, "more and more people recognize me," he said. 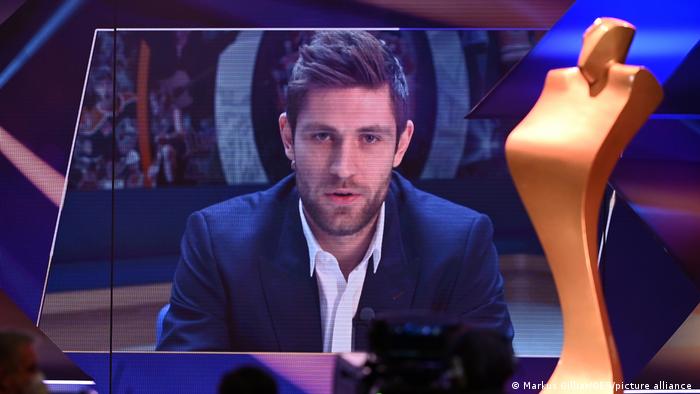 Due to the coronavirus pandemic, Draisaitl was not able to attend the ceremony to receive his award as Germany's male athlete of 2020

Draisaitl spent most of the NHL's offseason in Cologne last autumn, with a view to raising his profile. Several television interviews and large spreads in all of the major German daily papers helped introduce a still largely unknown superstar to the country's sports fans.

In Germany, Draisaitl has often been compared to Dirk Nowitzki. The former Dallas Mavericks power forward was the unofficial ambassador of basketball in Germany for two decades. Nowitzki led the Mavs to an NBA title in 2011, when he was also named the MVP of the playoffs – and was named Male Athlete of the Year back home.

Out from under Nowitzki's shadow

When Draisaitl first made it to the NHL, the German media often described him as the "Nowitzki of ice hockey," and he has often said that he would like to do for hockey in Germany what Nowitzki did for basketball. But at 25, Draisaitl has already achieved the equivalent of everything Nowitzki did in terms of individual awards. Nowitzki was 28 when he was named the NBA's MVP award and 33 when he was named Germany's Male Athlete of the Year.

Draisaitl is still flattered by comparisons with one of Germany's greatest-ever athletes, but having become the NHL's top scorer with 110 points (43 goals, 67 assists) in 2019-20, he has now established himself as a superstar in his own right.

The only thing the Nowitzki achieved that Draisaitl hasn't is to win a championship. And particularly since winning those three individual awards, Draisaitl has made no secret about the fact that winning a Stanley Cup is his ultimate goal – as it is for every player who makes it to the NHL.

To win the Cup, though, you first have to make the playoffs, and that's been a problem for the Oilers in recent years. Since arriving in Edmonton in 2014, Draisaitl has only been to the playoffs twice. And this is despite the fact that the Oilers have another superstar in their lineup, Connor McDavid. But as ESPN hockey writer Greg Wyshynski put it in his Oilers' season preview, "two elite players does not a championship roster make." 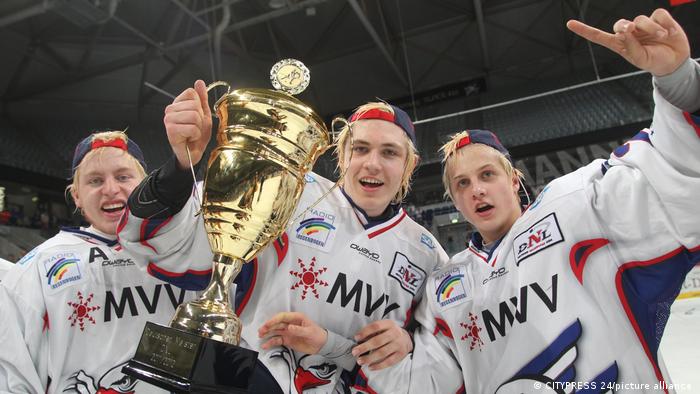 Reunion with an old friend

"I think we've made some good additions, so we'll have more depth," Draisaitl said looking ahead to the 2020-21 campaign, which the Oilers are to open at home to Vancouver on Wednesday.

Among the new faces in the Oilers dressing room is Dominik Kahun, whom Draisaitl knows not only from the German national team. Years ago, the two tore up the under-16 Bundesliga as part of the Adler Mannheim youth program. Draisaitl scored 192 points in 29 games in the 2010-11 season, while Kahun, not exactly known as a scorer since making it to the NHL, managed 206 points in 30 games.

"Those were different times. Dominik and I were very dominant back then, and the numbers reflect that," Draisaitl said.

In preseason, Oilers head coach Dave Tippett has had Kahun playing on Draisaitl's line. Draisaitl hopes the two can rekindle the chemistry they had in Mannheim a decade ago. But when reflecting on that season, the "guy who doesn't like to look back" was quick to play down expectations.

"Of course, we won't have a 200-point season. I think everyone knows that, though."

Leon Draisaitl scored the most points in the NHL's coronavirus-shortened regular season. We look back at his career to date and how he became Germany's biggest-ever hockey star.