Hygiene - How to avoid diarrhea

Diarrhea is very common in Africa and a major killer. But few people are really adept in all of the tricks to avoid catching illnesses linked to hygiene. 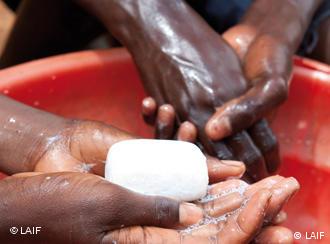 It’s not just the well-known epidemics such as malaria and HIV/AIDS that are taking lives in Africa. A simple case of diarrhea can also be fatal for a child. According to the World Health Organization, diarrhea is responsible for the deaths of 2.2 million people every year. Most of them are affected because they use contaminated water for drinking, cooking and washing. But does diarrhea have to be a killer in Africa?

Young Sam and his family are desperately fighting the dangerous unwanted resident. Sam and his baby sister are very ill and their health is decreasing rapidly. Will they survive? Maria, the know-it-all neighbor, is never short of ideas to help. Still not convinced, Sam’s friend Chemu decides to declare war on the affliction – by her own means.

In this Learning by Ear series about hygiene, listen on to how Sam, his family and friends struggle with diarrhea and learn about its causes, prevention and cure.