Peaceful protests against a shipment of atomic waste took place across Germany over the weekend. But police are investigating connections between the protests and explosives found along a railway north of Berlin. 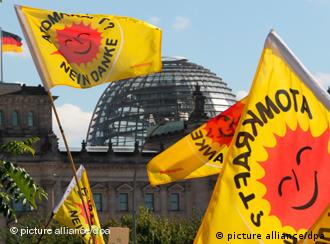 With another rail transport of high-level nuclear waste scheduled in Germany this week, activists opposing nuclear power have staged protests and are gearing up to block its route by occupying the tracks.

Protest events were held in a number of German cities over the weekend, with the biggest taking place in Greifswald and drawing more than 1,000 protestors.

The rallies were held ahead of the expected February 16 nuclear waste transport, which will likely see activists attempting to block rail travel at numerous junctures along its route.

The nuclear cargo will travel from the southwestern German city of Karlsruhe to a storage facility near Lubmin, which is on the Baltic Sea. On board will be nuclear waste which has been vitrified - or mixed with glass - and stored in 140 "castor" containers designed for spent nuclear fuel.

The materials stem from a reprocessing facility in Karlsruhe that was in operation from 1971 to 1990.

So far, the protests have been peaceful, but authorities have been investigating who was responsible for several explosive devices discovered along a railway north of Berlin on February 11. They have not yet ruled out a connection with the upcoming nuclear transport.

Felix Leipold is an activist with an organization called Anti-Atom Bündnis NordOst that has helped organized many of the protests.

"We're of the opinion that atomic energy cannot be controlled," Leipold said. "It creates an enormous disposal problem, and we have to deal with that. We have a large transitional storage facility here, and there are many people here who are not okay with it." 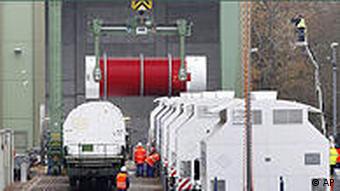 "We're of the opinion that a (nuclear waste) castor transport is at least as dangerous as highly poisonous chemicals," he told Deutsche Welle. "Amazingly that's a regulation which doesn't apply to castor transports."

There were similar protests against nuclear waste transports late last year. They resulted in delays for the trains involved.

"This time, we're assuming it will be milder and maybe also less wet," noted Leipold, "And so we're assuming that more people will be willing to risk it to this point."

Activists are preparing to protest a cross-country train transport of nuclear waste. Authorities aren’t saying when the transport will leave, but the protestors plan to intercept it. (10.02.2011)

The train carrying nuclear waste from southern France is making its way to a storage facility in Lubmin in northern Germany. Despite threats from anti-nuclear protesters, there have only been minor delays. (16.12.2010)

Demonstrators have gathered in the north-eastern German town of Greifswald to protest against the government's nuclear policy ahead of another transport of nuclear waste from German and French research facilities. (11.12.2010)