Protesters in Germany gear up to block another nuclear waste transport | Environment | All topics from climate change to conservation | DW | 10.02.2011

Activists are preparing to protest a cross-country train transport of nuclear waste. Authorities aren’t saying when the transport will leave, but the protestors plan to intercept it. 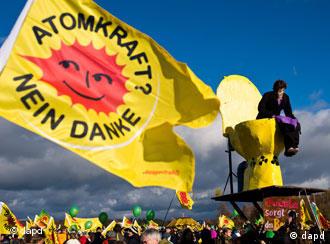 With another rail transport of high-level nuclear waste scheduled in Germany this month, activists opposing nuclear power are gearing up to block its route by occupying the tracks.

The transport will travel from the southwestern German city of Karlsruhe to a storage facility near Lubmin, which is on the Baltic Sea. On board will be nuclear waste which has been vitrified – or mixed with glass – and stored in 140 "castor" containers designed for spent nuclear fuel.

Local police at the transport's destination wouldn't give information about the scope of their preparations, and the Federal Ministry of the Interior also declined to comment on the route or date of the transport when contacted by Deutsche Welle. However, media reports last month indicated federal police had booked rooms in area hotels.

Protestors are planning to start their protest on February 12. They expect the transport to leave Karlsruhe during the night of February 16 and arrive in Lubmin the next day. The train may pass through Saxony, where a force of 600 police will be mobilized, according to local press. 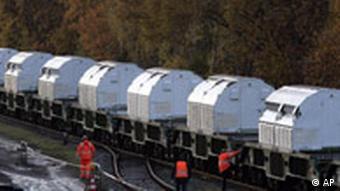 On February 5, several hundred people gathered in the northern German city of Rostock for a separate protest against the transport.

Felix Leipold, an activist with the organization Anti-Atom Bündnis NordOst, said he is expecting thousands to attend protests across Germany on Febuary 12. For the most part, protestors will stand beside the tracks and wave in the hopes of slowing the transport down. Protestors serving as lookouts will watch for the transport and track its position via updates on the Internet.

"We're of the opinion that a (nuclear waste) castor transport is at least as dangerous as highly poisonous chemicals," he told Deutsche Welle. "Amazingly that's a regulation which doesn't apply to castor transports." 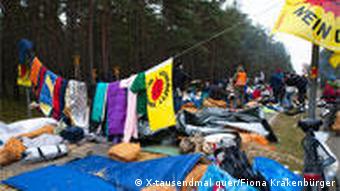 Anti-nuclear protesters were a real headache for police in November

Leipold said the protesters plan to block the transport as it travels the last 20 kilometers of track on its route, which is privately owned by EnergieWerke Nord GmbH, as they did in a similar protest in December.

"In December 300 people held out on the tracks for about three hours," he said. "We're assuming it will be milder and maybe also less wet. And so we're assuming that more people will be willing to risk it to this point."

Leipold said Anti-Atom Bündnis NordOst has met with police ahead of the protest, and that he expects the protest will be carried out without violence or damage to property.

The planned February 12 protests are unlikely to reach the scale of those of November of 2010, during which protestors damaged tracks and slowed a transport bound for the Gorleben nuclear waste depot in Central Germany. Those protests were not organized by Leipold's group.

"We're of the opinion that atomic energy cannot be controlled," Leipold said. "It creates an enormous disposal problem, and we have to deal with that. We have a large transitional storage facility here, and there are many people here who are not okay with it."

A day after being elected as the new head of the German police workers' union, Bernhard Witthaut said German police are spread too thin, overworked and increasingly at risk. (23.11.2010)

A look back at the top environment stories of the year

A volcanic ash cloud, a catastrophic oil spill and a new initiative to protect poor nations from climate change – a look back at 2010’s top environment stories. (30.12.2010)

A volcano near the Fagradalsfjall mountain in Iceland erupted in early August and has since been attracting onlookers from all over the world. The lava could flow for at least six months, say experts.