The English Premiership may enjoy a huge following, foreign investment, massive TV royalties and some of the world's best players but the Premiership could look to Germany for tips on how to keep things real. 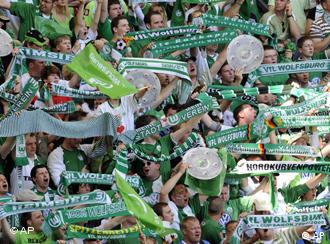 The good old Bundesliga, often seen as the poor relation in European soccer behind the English, Spanish and Italian leagues, is actually Europe's most popular league in terms of putting bums on seats.

Last season, Bundesliga games attracted nearly 7,000 more fans per game on average than the Premiership. The Bundesliga has actually surpassed the Premier League in attendance for each of the past five seasons.

Even more shocking, especially to English soccer snobs who rate their league higher than any other, the Bundesliga is the best supported domestic league in the world, based on regular attendance.

German clubs are attracting supporters and retaining the faithful by keeping ticket prices in their ultra-modern stadiums at a reasonable level and by creating an atmosphere which harkens back to the golden age of soccer, when it was all about the match and not the money.

"The fans come first and the Bundesliga clubs recognize this," Kurt Rolfes from the Borussia Dortmund fan club told Deutsche Welle. "At Signal Iduna Park, we pay about 11 euros for a ticket. With prices like that, at a time when things are hard for many people, everyone can afford to come and support the team.”

Dortmund is a perfect example of the soccer madness and dedication that the increased focus on money and commercialism is threatening to destroy across the water in England.

Borussia Dortmund is Germany's best supported club and has an incredible 50,000 season ticket holders. Despite being a club that has not finished higher than sixth in the Bundesliga since 2003, Rolfes said that BVB regularly fills its 80,708 capacity stadium – a feat which was only beaten by crowds watching Barcelona and Manchester United last season. 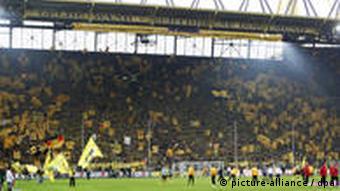 Dortmund's full house rates up there with Barca and Man Utd

"This is a club which hasn't had a lot of success in recent years and which is right in the middle of the Ruhr region, which has high unemployment, but Dortmund rivals the biggest clubs in Europe in terms of attendance," Rolfes said.

Steven Powell, the director of policy for the Football Supporters' Federation of England and Wales, believes the Bundesliga reaps the rewards from inspiring the loyalty of fans.

"The Bundesliga has a much better policy for season tickets," Powell told Deutsche Welle. "The tickets are heavily discounted, costing the fans as much as 50 percent less than if they bought single tickets for every game. This inspires club loyalty and guarantees full houses every week."

In the Premiership, Powell explains, it's like-for-like. A fan could spend around 2,200 euros for a season ticket which would be the same if he or she bought individual tickets.

As a result, most of the top Bundesliga teams regularly play in front of sell-out crowds which help to create an electric atmosphere which some of the Premiership's clubs, with their soulless and cavernous stadiums, would die for. It's very rare that you can hear a conversation echoing around the stands during a period of dull play in venues such as Bayer Leverkusen's BayArena, Bayern Munich's Allianz Arena or Schalke 04's Veltins Arena.

This atmosphere is aided by the German league's decision to retain some areas of standing-only terracing which were removed from English stadiums after the Hillsborough Disaster in 1989, when 98 Liverpool fans died in an over-crowded terracing section.

German clubs reserve a standing area for home fans where the club's most vociferous supporters create a wall of noise. These areas are often filled with flags and banners which never stop waving and followers who never stop singing. An even more unimaginable sight for English fans is that of stadium staff moving among the crowd selling inexpensive beer from portable backpacks. Alcohol sales are forbidden in British stadiums. 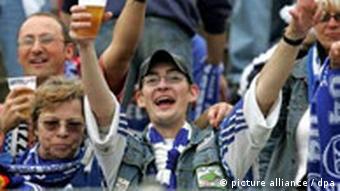 Beer in the fan blocks is supplied by stadium staff

The clubs are aware of the advantages of having these fan blocks well attended and in full voice and have set their ticket prices accordingly. A child's ticket for the fan block behind the goal at Bayern's Allianz Arena costs a mere two euros.

"One of the main things the Premiership could learn from the Bundesliga is the ticket prices which are kept low because of the standing areas," Powell said. "They can get more people in. At German games, you see a lot more unaccompanied teenagers going with their mates to the game because they can afford to. In England, the youngsters you see are either in small family enclosures or there as a special treat. They can't afford it otherwise."

Safety for those in the fan block is also of high concern and it is clear at most stadiums that considerable thought has gone into making these fan blocks as safe, spacious and modern as possible.

Powell believes that the Bundesliga has the model for safe and modern standing terracing that could be copied in the UK. He says that a nationwide opinion survey undertaken by his organization shows a widespread desire for a reintroduction of Bundesliga style standing regulations in the English game. 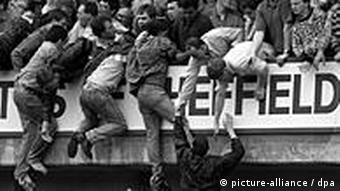 Terracing has come along way since Hillsborough

"People want a choice," he says. "There should be state-of-the-art standing areas and comfortable seating, giving the fans the choice of where they want to see the game from, just like in the Bundesliga."

The German atmosphere also gets a boost due to a lack of obvious crowd segregation, a nod to the improvements made at Germany's top league clubs to stamp out hooliganism.

The apparent trust shown to the crowd is repaid by remarkably low instances of violence, although security measures and segregation is introduced for the most volatile games, such as the Ruhr derby between Dortmund and Schalke and the clash between northern rivals Hamburg and Bremen.

The connection between team and fans is also encouraged in the Bundesliga.

Players may earn more in a week than most people earn in a year but Bundesliga players are urged by their management staff to applaud and acknowledge their supporters whatever the result, in an appreciation of the fact that they have paid to watch and show their loyal support through thick and thin. 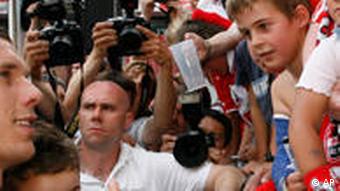 German stars are encouraged to connect with fans

"You can see that the fans really feel part of the club in Germany," Powell said. "Ticket prices, the choice to sit or stand and the way they're treated like adults really helps the German fans to feel involved and respected and for the players to honor that makes a real difference."

Powell believes the Premier League should stop treating fans like consumers and embrace the values that seem apparent in the Bundesliga.

"This attitude of 'sit down, shut up and open your wallet' is alienating people in the UK," he said. "Some fans prefer to watch games in the pub because they're allowed to have drink, can sit or stand when they like and there's no one shouting at them to do this or that. If this doesn't change, we'll be looking at half empty stadia in the future saying 'where did everybody go?'"

While the rise of the Premier League cannot be doubted or its attraction questioned, the Bundesliga has done much to keep soccer from suffocating under the clamor of naming rights, endorsement deals and business models. It may be seen as something of a throwback but the Bundesliga continues to show that soccer can still have a soul.

After record attendance last season, Bundesliga experts are predicting the German league will attract even more fans this year. But many teams are still bracing themselves for the full impact of the financial crisis. (07.08.2009)

German clubs may have disappointed on the pitch in European competition, especially in the flagship Champions League tournament, but Germany's Bundesliga certainly belongs to the richest European football leagues. (05.06.2009)

Its teams may be struggling to make an impression on the European soccer scene but at home, the Bundesliga is going from strength to strength in terms of financial power. (14.03.2008)