According to the Syrian Observatory for Human Rights, a large explosion has hit near Damascus International Airport. Syrian state TV said an Israeli airstrike targeting a Hezbollah arms depot caused the blast. 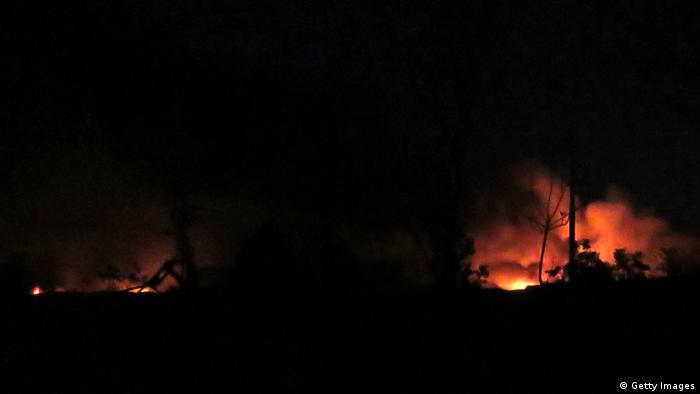 The Syrian Observatory for Human Rights said on Thursday that a large explosion rocked the Syrian capital early in the morning and that fire was now burning near the airport.

No casualties have been reported.

"The blast was huge and could be heard in Damascus," said the head of the Syrian Observatory for Human Rights, Rami Abdel Rahman, according to the AFP news agency.

A Lebanese TV channel, al-Manar, said the blast was "probably" caused by an Israeli airstrike.

Read: On the frontline - citizen journalism in Syria

Al-Manar is affiliated with Hezbollah, an ally of the Syrian government. Syrian state television also reported that Israel had conducted a missile attack on the site.

An anonymous regional intelligence source speaking to Reuters said the blast site contained a weapons depot operated by Hezbollah, which was regularly stocked with supplies sent from Tehran. Iran is also an ally of the Syrian government.

Israel has refused to confirm or deny that it was responsible for the blast, but  Israeli Intelligence Minister Yisrael Katz said such a strike would be in line with Israeli policy.

"We are acting to prevent the transfer of sophisticated weapons from Syria to Hezbollah in Lebanon by Iran," Katz said on Israeli army radio. "When we receive serious information about the intention to transfer weapons to Hezbollah, we will act. This incident is totally consistent with this policy."

Israel has carried out similar attacks in the past.

Damascus has been largely spared from the violence that has occurred regularly in other parts of the country since Syria's civil war began in 2011, but clashes between government forces and rebel troops have come closer to the capital in recent months.

Russia has faced the fury of the international community for failing to rein in the Syrian regime following the suspected chemical attack in Idlib. President Trump said his attitude towards Syria "has changed very much." (05.04.2017)