Tens of thousands of Malaysians have held an anti-government protest in Kuala Lumpur, calling on Prime Minister Najib Razak to step down over corruption allegations. The Malaysian leader denies any wrongdoing. 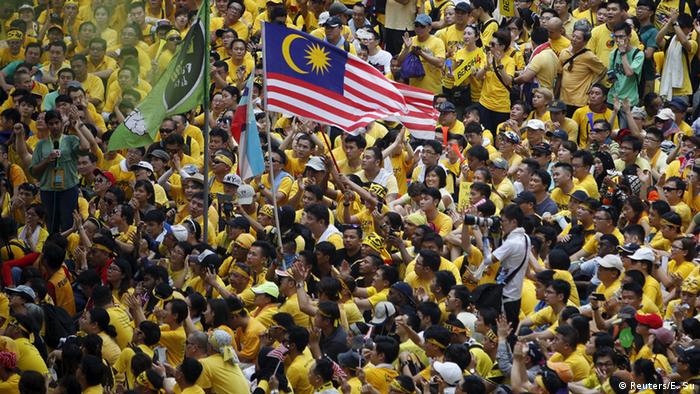 There was a heavy police presence in Kuala Lumpur on Saturday, as protesters wearing yellow T-shirts and headbands marched peacefully through the city center.

Authorities had declared the rally illegal, banned yellow attire and blocked the website of pro-democracy organization Bersih, which organized the two-day gathering. Riot police and security barriers had also blocked off the historic Independence Square, where the activists had planned to converge overnight.

Bersih said around 200,000 people turned out, but police put estimates much lower - at around 25,000. Activists waved Malaysian flags amid a sea of yellow - the protest movement's signature color - and carried placards saying "We will not be silenced" and "Out, Najib, Out."

Embattled Prime Minister Najib Razak was accused of money laundering after documents leaked earlier in the year showed that almost $700 million (620 million euros) from the debt-laden state development fund 1MDB had been transferred to his private bank account.

Najib, 62, denies wrongdoing and says the money was a donation from the Middle East. He later fired his deputy and four other cabinet members who had publicly questioned him. He also replaced the attorney general who had been investigating the case.

After taking power in 2009, Najib set up the 1MDB fund to spur development in the nation of 30 million, and vowed to end corruption and authoritarianism. Since then, 1MDB has accumulated 42 billion ringgit (9 billion euros) in debt, and plans for reform have stalled.

The graft scandal has threatened Najib's National Front, which has held on to power since the country gained independence in 1957. 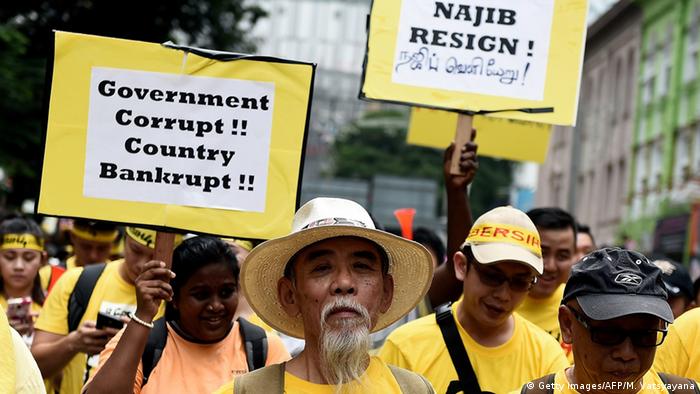 "For 58 years people have been patient with bribes, a political system that cannot resolve 1MDB. Today we want reform," said Bersih leader Maria Chin, calling on parliament to hold a vote of no-confidence in the prime minister.

"Those who wear this yellow attire...they want to discredit our good name, scribble black coal on Malaysia's face to the outside world," he was quoted as saying by national news agency Bernama.

Amnesty International urged Malaysia's government to listen to the protesters instead of trying to suppress them, saying "the crackdown on freedom of expression by the government must end."