How young Cubans are learning capitalism

Ironically, it's a state institution, the University of Havana, that's running communist-ruled Cuba's first startup incubator. It's supported by the Humboldt University of Berlin. Andreas Knobloch went to visit. 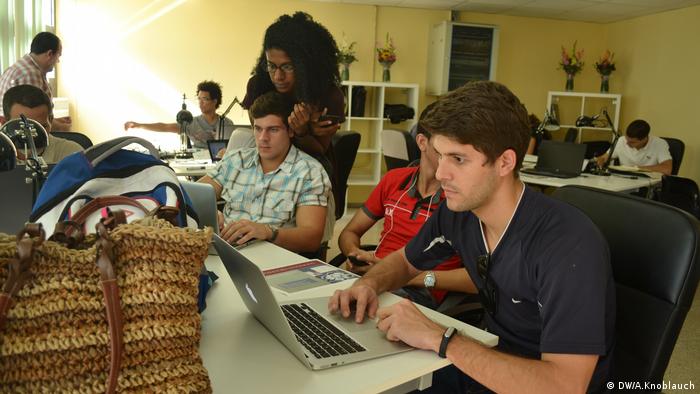 Jan Ehlers wasn't quite sure what he'd gotten himself into when he packed up his kids and headed off to Cuba for several months. His task: to set up Cuba's first incubator for the development of innovate business ideas. The University of Havana project receives support from Berlin's Humboldt University.

"The Cubans themselves had no idea, or at least a very different idea, of how something like this works," says Ehlers with a smile. In Berlin, Ehlers works at ESCP Europe Business School in the corporate relations and business development department.

"They thought I would show up and give lectures all the time. But I thought: I'm not going to give lectures; I'm not even a teacher. They found that odd. That made things a bit tense at the beginning."

There were several logistical challenges to overcome. It took months before an internet connection was installed - and even then it was extremely limited, as is often the case in Cuba. "I watched a five-minute YouTube video and my data volume for the month was finished," Ehlers says, adding that in the meantime he's gained unlimited internet access.

Gaps between academia and industry

Seven startups from the IT, biotech, medical technology and solar sectors were chosen for the project. One team, for instance, wanted to develop an app that would allow users to navigate their way from A to B with public transport without having to go online. Another team had a plan for using drones to inspect solar parks and check plant stocks in the agricultural sector. Another team, led by Marta L. Baguer, a professor of mathematics at the University of Havana, was working on image recognition software designed to detect early stage cervical cancer.

In Cuba, there is a massive gap between the world of academia and that of industry, Baguer says. The incubator helps to fill that gap. "When I met partners from state institutions it used to be that we would dive into the mathematical details, now we focus on more practical questions," she adds.

At first, the startup incubator held workshops dealing with design thinking, business modeling and marketing. "And then I just got lucky. I met a marketing expert with a high-level position in a German company at a dinner party at a friend's house," says Ehlers. "That's how I recruited my first lecturer. He explained how market observation works and taught teams about developing customer oriented business models."

After that, a number of guest lecturers from Germany became involved, as well as a network of Cuban mentors from various businesses, ministries and the university itself. Moreover, each team was assigned an experienced German businessperson to serve as their mentor.

The Cuban government now allows - albeit on a very limited basis - private business initiatives. State Owned Entities (SOEs) have been granted much more autonomy, a special economic zone has been established and a new investment law has been designed to attract foreign cash.

The startup incubator mirrors these developments on a smaller scale: It represents a cautious approach to market and business-oriented thinking, embodies a certain amount of optimism, yet is also very uncertain about what the future will hold.

"Does the program also have a responsibility to prepare people for how to deal with the principles of a market economy beyond conveying academic and research skills?" asks Ehlers. 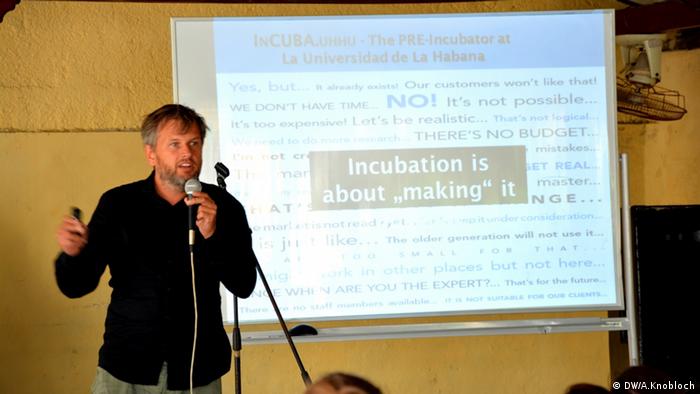 A model for Cuba?

"At the foreign universities I have visited, almost all of the professors run projects together with private industry and invest profits from the projects back into science and improving their own work situations," says Baguer. That might be a model for Cuba, says the university professor. She says her institution needs to have its own income.

"The fundamental problem is that we invest years into the education of our best students and then they leave the country. Experienced professors and researchers do too, or they go into the private business sector," she says. Therefore, finding ways to improve working situations and income are among the biggest challenges.

Cuba's high level of education, its people's ability to improvise and also its low wage scale could make it an ideal place for technology start-ups in the future. On the other hand, it is just a matter of time before incubators from the USA and Europe begin luring talent away from the island state.

Ehlers says that's why Cubans should be given the chance to create their own businesses. "Every day I see how much Cubans love their country. That they don't want to leave and they are willing to pay a price to stay here. That puts pressure on the government, the bureaucracy and university administrators to quickly find a way to help professors and students feed their families - without having to drive a taxi, or sell ice cream or cigars on the side."

The goal of this start-up incubator is to help the University of Havana take on a leading role in initiating that change.

The US president partially reversed Washington's diplomatic and commercial opening to Cuba that was unveiled in 2014. The Kremlin accused Trump of pandering to a small group of Cuban-American voters. (18.06.2017)

Some of the world's most lavish consumer brands are making their first appearance in Cuba. After decades with a focus on social equality, the government hopes high-end tourism will help the economy. (25.05.2017)