How we’re keeping the faith

“I am Christian, but…” is what many young Christians tend to say. We’ve spoken to three of them about their faith, values and the difficulties they have with the Church. 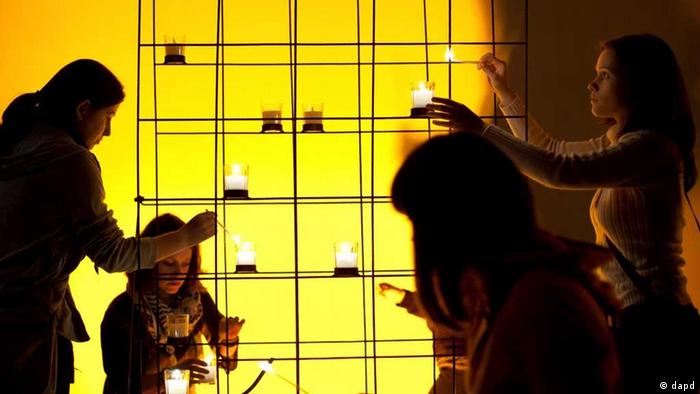 If Julia (25) wasn’t already a member of the Protestant Church she’d become one - even if it was only for one reason...

Are you a Christian?

Yes. I grew up in a Christian family and we celebrate Christmas. I do pray now and again, especially if I need some kind of support. And I do believe in the Ten Commandments and abide them. But it’s not like I don’t eat meat on Fridays, or rest on Sundays.

So if someone asks me what my religion is, I say: I’m a Christian, of course. But I don’t go to church.

For me, these are two entirely different things and I don’t feel closer to my faith when I’m at church. I have my own interpretation and don’t feel I have to share that - especially not with a priest or pastor. I don’t want anyone to interpret my belief for me or tell me at what time I should worship.

I did go to church when I had to during confirmation classes. At least I tried. We used to tell our parents that we went there but we actually went to have breakfast instead. And I attended the Christmas mass with my parents twice. But now my parents don’t go to church anymore, so neither do I.

What do you associate with the Christian Church?

The burning of witches. Their disapproval of LGBT people. And that the Church has a special meaning, especially in regions where people are poorer. I really like that because for these people it’s a place where they are met with kindness and treated equally. But it’s just not like that for me.

Does it make a difference to you whether it’s the Catholic or the Protestant Church?

I am glad that I am a Protestant because they seem to be more liberal. There’s not one spiritual leader - no Pope. In Cologne, there’s even a pastor who is gay and married to a woman. That made me like Christianity even more.

So are values more important to you than religion?

Yes, definitely. Family and everything related to it is the most important thing for me. That’s why I’m still a member of the church because otherwise I couldn’t have become godmother to my niece. I would have even joined the church just to be allowed to become a godmother. Apart from that justice is really important, too, and fairness.

Next (look for the little 'pages' button below!): find out why Tobias thinks the Pope is one of the best choices the Catholic Church has made in recent years.

Tobias (30) thinks the Pope is one of the best choices the Catholic Church has made in recent years.

Are you a Christian?

Yes, I am a Roman Catholic Christian. I am a member of a Catholic Association for Academics. I go to church from time to time and I try to get involved in my community. I have relied on my faith particularly when my relationships failed or when there were other lows in my life. But I have rather mixed feelings towards it.

I never had the feeling that I was connected to something divine, to be honest. Then again, faith is a key concept which has taught me basic values. I don’t know if a specific faith is necessary for that but here in the West it’s obviously Christianity that has taken on this role.

What do you associate with the Christian Church?

The Catholic Church is a global community of values. I could travel to Latin America, South Africa, Egypt or Europe and, even though I might not understand the language, I could attend a mass and know what was going on.

The Pope is the person holding this community with its global heterogeneity together. There are several different schools of thinking within the Church, therefore it’s important to have someone behind the wheel. It can slow down change and reformation but it also protects the community from drifting to the extreme.

People really like Pope Francis - he’s been a lucky choice.

How important are Christian values for you compared to the importance of the Church as an organisation?

Christian values are definitely more important than the organisation. But organisations are necessary to make things happen.

Christian values can be considered as sort of rules in the game of life. Only if you know the rules, you know how to overcome them, if need be, and what the consequences of that might be.

Next (look for the little 'pages' button below!): read why Kristian considers the Catholic Church an important institution - despite all the criticism...

Kristian (29) considers the Catholic Church an important institution - despite all the criticism...

What does your faith mean to you?

I don’t have to talk about my faith publicly. Very often I just “live” my faith in my mind only. I go to church now and again and there are occasions when I pray: during exams, when a family member got sick or even during difficult situations in everyday life.

For me, my faith is mostly about having a guiding principle for my behavior towards other people, animals and our planet. My faith is important to me because it gives me strength and hope in difficult situations.

What do you associate with the Catholic Church and the Pope?

A couple of negative things, unfortunately, but also something positive. Negative: the dark history with the crusades, the unprogressive attitude of the Church and the Pope towards several aspects of life, the numerous scandals.

The positive things are: the Church’s involvement in political conflicts, as well as its support for socially deprived and sick people through a number of institutions.

I still consider the Church - despite all legitimate criticism - an important institution in our society: be it funding day-care centers, taking care of homeless people or refugees and so on.

Why do you think do so many people are turning away from the church?

The Church needs to reform itself in some aspects. I still think there are many young people who believe in God. But the Church needs to adapt to the progress society is making at least to some degree to be able to appeal to younger generations.

On the other hand, the Church should not lose its credibility. It will always be more conservative in its values than society. But that’s good.