How video blogging is changing the media industry | Science | In-depth reporting on science and technology | DW | 12.11.2014

How video blogging is changing the media industry

More and more video bloggers, vloggers, are taking their online fame to television. DW takes a look how their online appeal is transferring to mainstream media. 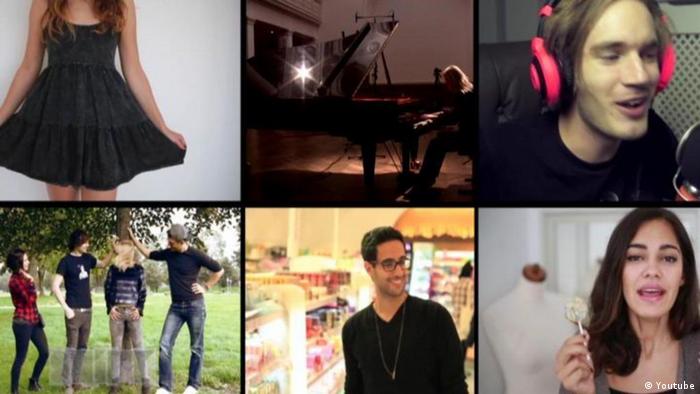 Vlogging, a portmanteau for video blogging, involves posting to platforms like YouTube. It has been very popular among young people in recent years. Now, some of the most popular vloggers on YouTube, the world's biggest video-sharing platfom, are using their online fame for work in television.

"These creators have millions of subscribers and have an audience, that many brands don't reach anymore or not in that way," says Mounira Latrache, YouTube's spokesperson in Germany.

YouTube star Franchesca Ramsay, who is better known as ChescaLeigh, recently partnered with Ford and the US Public Broadcasting Service (PBS) to work on a TV show.

The show, "Finding your Roots," features famous Americans and researches their family's past and identity.

Identity isn't new for Ramsay. She gained popularity with her vlog "S--t White Girls say... to Black Girls," which has millions of views on YouTube.

Her video parodies were inspired by another viral vlog, "S--t Girls Say." Ramsay wanted to discuss everyday experiences with racism, she told DW in a report last year. Ramsay is just one of many young vloggers who are using video blogging to share their experiences and connect to their peers.

"I wasn't very popular at school, but I suddenly found this website where everyone was connecting together… a really cool place where I could talk and have my voice heard," YouTuber Rebecca Brown says.

Brown, who is better known as BeckieO, talks openly about her struggle with "Trichotillomania" -- an impulse disorder characterized by a compulsion to pull out hair.

Brown is now in talks to do some presenting work for the show "BBC Trending," which covers popular topics on social media. YouTube is also interested in working more closely with Brown in the future. With the YouTube Channel "Bite the Ballot," she will create vlogs to educate and encourage more young people to vote in politics.

The authenticity of video bloggers allows them to connect to their audiences, says YouTube's Latrache.

"They don't just see their community as just viewers, they see them as part of the whole product. They involve them and they share ideas," she explains.

How vlogging is changing television

The fact that video bloggers are already famous in some online communities makes it easier for television production companies because they know that there is already a huge demand for them.

"What used to be long casting processes and editorial teams that have hand selected a talent, is now basically decided by an audience directly" says Christoph Poropatits, Executive Vice President for Platforms and Operations at the Multi-Channel-Network Mediakraft.

Vlogging is democratizing casting. Vloggers don't need to go through the rigorous rounds of auditions during a casting process as the increasing number of viewers on their YouTube channel already shows how talented they are.

"The audience decides who is a star and who is not a star," Latrache says.

With some YouTube stars having attracted so much attention and having evidence of their status online, they become popular enough to host a TV show.

"Basically it is like a talent pool for media…on the other side through their channels they get visibility. It's like their business card," Latrache says.

Astronauts, pop stars, Ellen at the Oscars, even you and me; we’re all taking part in the #selfie craze. But some are annoyed, say selfies are narcissistic and unhealthy, turning us into duck-faced robots. Really? (21.10.2014)

Personal, interactive: The future of TV

Magazines and newspapers have had financial trouble for years. Now, broadcasters are worried. Young people are turning their backs on traditional TV. In New York, Paul-Christian Britz looks at the future of the industry. (02.11.2014)

Check your head: are lice going as viral as the idea that selfies help them spread?

A Russian consumer rights body has warned teens that selfies are spreading head lice - and our obsession with connecting technology to the most intimate aspects of life has helped propagate that claim. (03.11.2014)