How Ukrainian cultural heritage is being preserved online Archives, collections and digital servers of cultural institutions need shelter from war, too

Russian bombs are falling on Ukraine for the fourth week running. Houses and hospitals have been destroyed, and many people have been killed.

The cultural heritage of the country has not been spared by Russian's army either. Important cultural institutions have been destroyed; among others, the Donetsk Regional Drama Theatre in Mariupol was completely destroyed by bombs, while the Sviatohirsk Cave Monastery — dating back to 1526 — was badly damaged by Russian shelling.

Though people in Ukraine are trying to save their cultural heritage, storing works behind sandbags or putting them away in bunkers, the voluntary organization Saving Ukrainian Cultural Heritage Online (SUCHO) is trying to save the country's heritage from afar. One of its initiators is the Vienna-based digital historian Sebastian Majstorovic.

"Apparently I am conscious about this fragility of culture," Majstorovic told DW. "Through my background you could say that I've developed antennae for that."

As a student in Cologne in 2009, Majstorovic witnessed the collapse of the city's archives. Innumerable documents were destroyed, including valuable records, writings from the Middle Ages and historical photographs.

"Our school bordered the backyard of the city archive and, coincidentally, I was in the classroom that overlooked the archive building. Because I was already programming apps at the time, I had an iPhone to record a video of the incident. The archive collapsed in front of my eyes. We saw how people were rescued from the debris of the neighboring residential areas. It had a huge impact," Majstorovic said.

Destruction of the National Library of Bosnia

The collapse of Cologne's city archives was not the only incident that made Majstorovic realize the fragility of cultural treasures.

Majstorovic's father, who comes from Bosnia-Herzegovina, escaped to Germany before the war, but has often told his son about the tragic losses of national heritage that occurred through the conflict.

In 1992, the Vijecnica building, which houses the National Library in Sarajevo, became the target of shelling by Bosnian Serbs — even though the grand building in Sarajevo's center was not used for military purposes.

More than 80% of the library's contents were destroyed; about 3 million books and numerous old documents tracing the history of the country went up in flames.

"The National Library was a treasure: It had documents about the multiethnic, cosmopolitan Bosnia, with its rich culture," Majstorovic said. "It is now difficult for historians to find, for example, documents about the Jewish community in Sarajevo. These are all things that got lost there."

Even though he did not experience the Siege of Sarajevo personally, Majstorovic said his father's accounts had deeply marked him.

"If the intention at the time was to destroy Bosnian identity by removing cultural institutions, then we see a similar pattern in Ukraine today," he said. 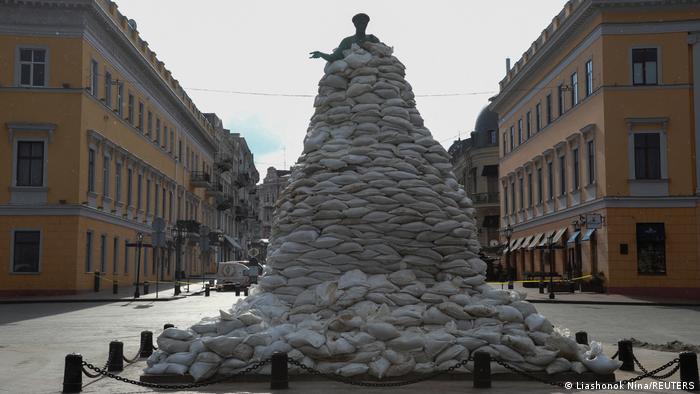 Today, Majstorovic works at the Austrian Center for Digital Humanities and Cultural Heritage in Vienna.

Three weeks ago, he founded SUCHO with two like-minded people.

"In the beginning, we focused on securing everything that was publicly available on the internet," he said. They use a program that searches websites of cultural institutions and archives for links and downloads information such as documents, photographs of artworks, virtual tours of reconstructed historical monuments, films, folk music productions amd traditional dress patterns.

The fully program does not function on its own all the time, which is why Majstorovic has enlisted the help of volunteers who help download the data manually. In some cases, programmers write special applications to save information.

For the past three weeks, SUCHO has already secured 10 terabytes of data.

At the beginning, Majstorovic took over the costs himself, but expenses grew fast; SUCHO now has support from tech organizations and internet providers who are making their servers available for free.

Majstorovic said the problem was not digitizing cultural heritage. "Cultural institutions, also in poor countries are doing a good job of digitizing their heritage. However, no one has thought much about securing the data and that is something that worries me," he said.

One needs to work together internationally to create a digital infrastructure in which even small regional museums can secure their data with little effort and at no expense, he added.

SUCHO is working with the Harvard Ukrainian Research Institute and the University of Alberta to create exactly this infrastructure in order to protect cultural heritage from war or natural calamities.

Majstorovic knows only too well how destroyed materials can make the work of historians more difficult.

For his doctoral thesis on revolutionary apprentices in the 19th century, many valuable documents are no longer available. "The main archives for my research are in Vienna and Milan. But the archive in Milan was destroyed by the Germans during WWII and the documents in Vienna were in the Palace of Justice, which was set on fire during the riots in the 1920s," Majstorovic said.

Many historians have been confronted with similar problems. "That is why digitally secured copies are so important," he says.

In fact, every cultural object is a public object and protected by the general rules of warfare. Additionally, the international community, including Russia, signed the Hague Convention for the Protection of Cultural Property in the Event of Armed Conflict in 1954. But Moscow does not seem to be adhering to the agreement in the current war.

Politicians are also trying to contribute to the protection of cultural property. The German government's commissioner for culture and media, Claudia Roth, for example, has created the Netzwerk Kulturgutschutz Ukraine with the Foreign Ministry.

Emphasizing that stopping Russia's invasion of Ukraine by the Kremlin and humanitarian help need to be at the forefront of international efforts, Roth said her office would additionally work "for Ukraine's cultural treasures, which are acutely threatened by destruction, and together with them, the cultural heritage of Europe." She added: "There are already a number of contacts and activities on all levels to protect endangered cultural objects in Ukraine."

Katja Keul, the minister of state in the Foreign Ministry, said Russia's invasion was deliberately targeting identity, heritage and artistic treasures: "We will help people in Ukraine with all our strength to protect and defend their culture."

The Culture Ministry is collecting proof from eyewitnesses on destroyed institutions. So far, 80 attacks have been made on cultural institutions, and the number is rising every day.