Both managed to save contemporary artworks from their gallery and transported them from Kyiv to Munich, where Ievgen Petrov's paintings are now on show. 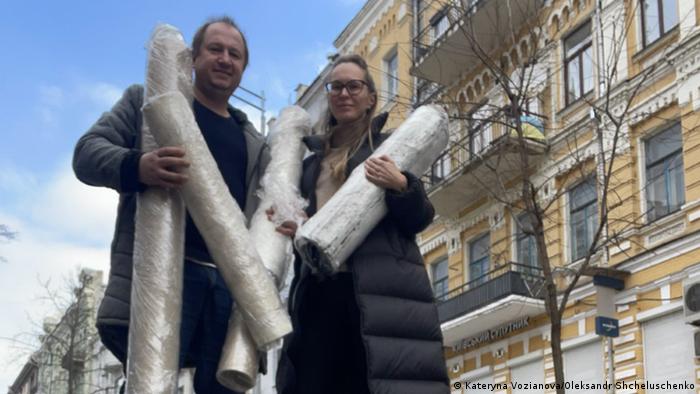 It was a rescue operation that reads like the plot of a war thriller: an art dealer and a gallery owner from Ukraine risking their lives to save works of art from the embattled city of Kyiv. They didn't do this on behalf of the government or any other organization, but on their own initiative as art lovers.

Katharina Vozianova and Oleksandr Shchelushchenko told DW how they managed to bring the works of art to Germany. 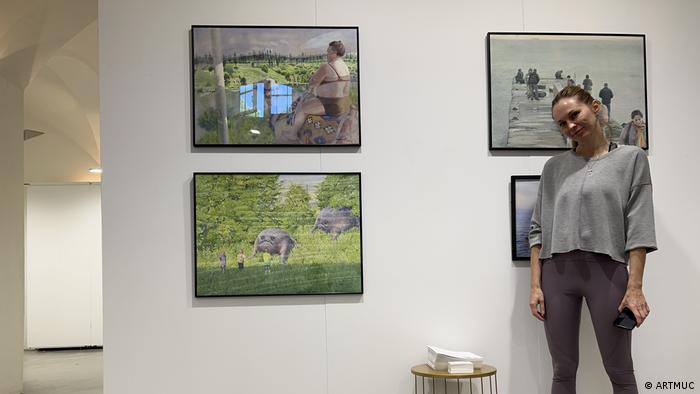 Katharina Vozianova with some of the works she rescued, now on show at the ARTMUC gallery in Munich

'It was very scary'

Ukrainian art dealer Katharina Vozianova spontaneously fled her home in Kyiv in February, without a plan for her artworks. "When the war started, I jumped in my car with three other people and drove off. I only had a small suitcase and a small painting by Ievgen Petrov with me," she says.

Before the war, she worked with various galleries in Kyiv and London and dealt in contemporary and avant-garde art. She never expected her life to change so quickly. 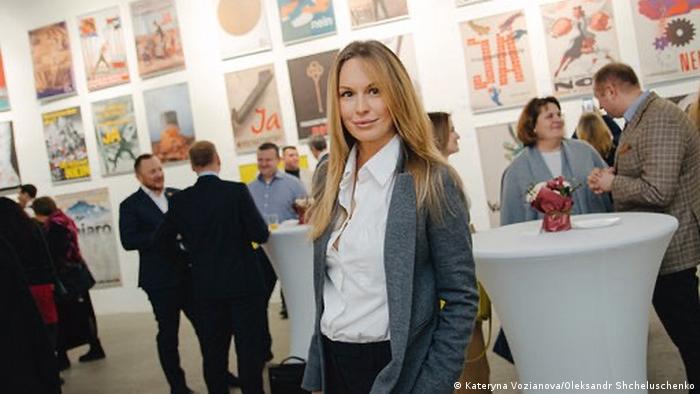 In Zurich, before the war: Katharina Vozianova is the Ukrainian representative of the London art dealer James Butterwick

She had actually already planned her next major exhibition featuring works by Ukrainian painter Ievgen Petrov with the gallery owner Oleksandr Shchelushchenko. Dozens of his works of art were already stored in Shchelushchenko's TSEKH gallery in Kyiv.

The war changed everything

After a short stay in Munich, Vozianova returned to her hometown. She did not want to lose her art to the war.

Shchelushchenko remembers Katharina's return. "She suggested that we take our artworks to Germany, where she is well connected. She would transport the art as a courier and organize everything that goes with it."

And so, the two embarked on their bold rescue mission. While the Russian army was attacking Kyiv, Shchelushchenko drove to his gallery and took the paintings out of their frames. "When I came to Kyiv on March 7, the atmosphere was very aggressive. Kyiv was being bombed; there were bombings all around the gallery," he says. He was supported by armed helpers. "We came with guns and special protective clothing." 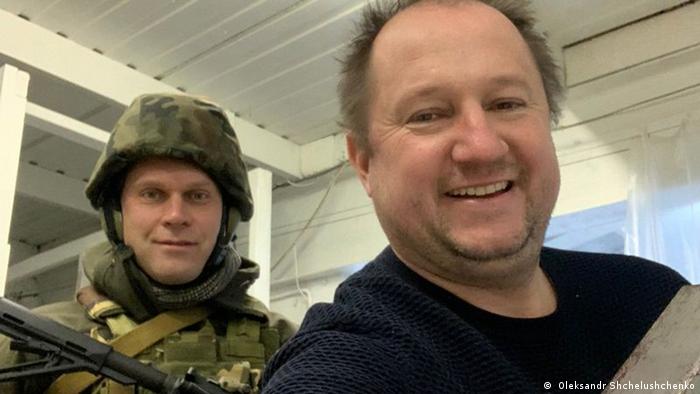 Lacking the proper packaging material, the gallery owner and his helpers rolled up the artworks of contemporary artists Ievgen Petrov and Mykola Bilous and packed them into sewage pipes, which kept the artworks protected. "There were three huge tubes, almost as tall as me," says Vozianova. 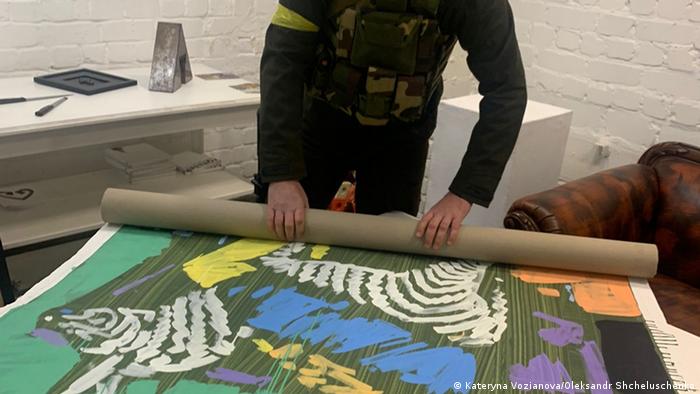 Around 40 images were rescued from the gallery

Meanwhile, Vozianova toured Kyiv to save more artworks from her own apartment and collected valuables that her friends had left behind when they fled.

Then she picked up the packed sewage pipes from Shchelushchenko's gallery, loaded them into her car and drove to Chernivtsi. The western Ukrainian city is about 45 minutes by car from Romania.

Even though she had managed to escape the war, once she had reached the Ukrainian-Romanian border Vozianova still had to face bureaucratic challenges. "You can't just drive across the border like that. I had to present documents that proved that the paintings were not national cultural assets, that they are actually works of contemporary art." 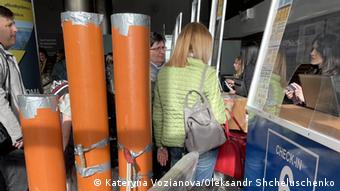 Unusual packaging: The paintings were transported in sewage pipes

She faced problems at the airport, too, as the security staff did not initially let her go through check-in. "They saw me, a little woman with these big tubes in her arms, and they said, 'What the hell is in there?' And then they X-rayed them to see if there weren't any weapons in it."

Around 40 paintings in Munich

The artworks survived the journey from Kyiv to Munich. What will happen to them now is still uncertain. Katharina Vozianova and Oleksandr Shchelushchenko would like to exhibit them and sell them to collectors. "We already have invitations to the Berlin Art Week and Art Vienna," says Shchelushchenko confidently.

But first, the paintings will be exhibited at the ARTMUC art gallery in Munich from May 13-15. After that, they will be shown in a pop-up gallery. "The plan is to show them together with other artworks from Ukraine. We want to support the artists who are stuck in Ukraine," says Vozianova.

The art market in the country has been completely disrupted. Many of the artists she represents became depressed, started drinking and stopped painting. The war weighs heavily on them, says Shchelushchenko, who left Kyiv because he no longer feels safe there. He now lives outside of the city and takes care of his mother.

"We are in constant contact with the artists," adds Vozianova. "Mykola Bilous is a really strong man. He told me, 'I will protect my house and my studio, I will definitely not leave'." Ievgen Petrov does not want to leave Ukraine either. "None of them want that." But as soon as they change their minds, says the art dealer, "we'll get them out of there right away." 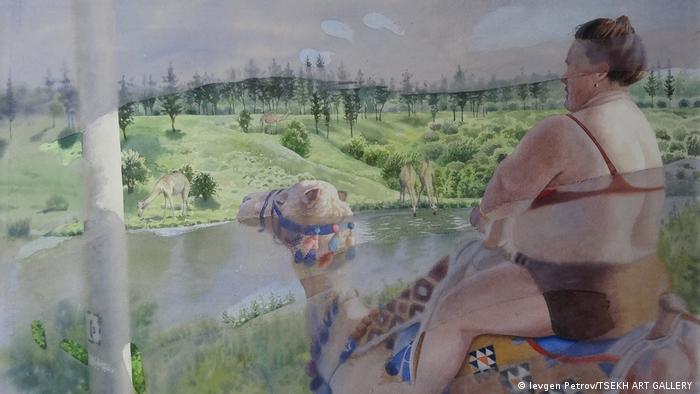 As Ukraine's cultural heritage and art faces destruction by Russian shelling and bombs, Ukrainian artists are sending a strong message through the Ukraine pavilion and a special open-air exhibition space.

Displaced: War and the creative imagination