How Much of a Threat is Bioterrorism?

Bioterrorism is seen as a real threat in today's world. But for an attack to cause significant damage, pathogens are needed that are effective even when spread over a large area. That requirement is hard to meet. 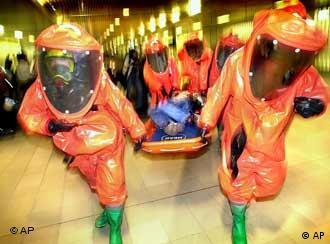 Experts warn that bioterrorism could be an efficient and deadly weapon in the hands of terrorists, who could potentially use small amounts of bacteria or viruses to kill many people over a large area. But Professor Sucharit Bhakdi, head of the Institute for Medical Microbiology at the University of Mainz, casts a critical eye on talk of a serious, imminent threat from biological agents.

"A bioweapon would need to have a lot of penetrating power, psychologically as well as economically and militarily," he said. "And it simply doesn't."

He points out that the dangers of bioweapons are often played up by a sensation-hungry media and that the threats such weapons pose are often referred to as "potential." He backs up his thesis with an example from the United States, where letters laced with anthrax were sent through the mail in 2001.

Five people died then from respiratory anthrax, while 12 or 13 of those infected survived. Though 20 to 30 additional people suffered skin infections, they were not fatal. Another 50 to 100 people caught the anthrax virus, but did not become ill. Those numbers are too small for a "serious threat," according to the researcher.

However, the international police organization Interpol is of a different opinion.

"Since the anthrax attacks in the US we know that even a small amount of biological material can have global effects, even beyond the target area," said Interpol General Secretary Ronald Noble. The organization has established a bioterror unit and is holding an international conference on bioterrorism on March 1 and 2 in Lyon, France. More than 400 delegates from 120 countries are taking part, mostly high-ranking police officers.

Interpol has also planned three workshops in the next few years, in South Africa, Chile and China, where police and medical personnel will be trained on how to react to a bioterrorist attack.

"We should allow our imaginations to run wild and be ready for anything possible," Noble said.

The kind of durable, highly infectious pathogens necessary for a bioweapon, which spread quickly and induce deadly physical reactions, are difficult to obtain. In their natural states, most are not suitable for use in weapons, including anthrax. "Upgrading" these pathogens for possible use in weapons, is not a task for weekend scientists working in garage labs.

"Creating weapons-grade anthrax demands the knowledge of a specialist and special equipment, most of which is only available in American laboratories," Bhakdi said.

The manufacture of weapons-grade bacteria and virus strains was banned by the Bioweapon Convention of 1972. The allocation of pathogen strains that could possible by used in weapons is strongly regulated. Established laboratories can receive them only after exhaustive checks.

How serious is the danger?

One of the largest problems around the manufacturing of bioweapons is integrating the pathogens into an actual weapon. For example, with anthrax, the dose needed in order to infect someone's lungs is relatively high, somewhere between 8,000 and 50,000 bacteria.

"Anthrax is, in comparison to chemical weapons, a blunt weapon," said Bhakdi. 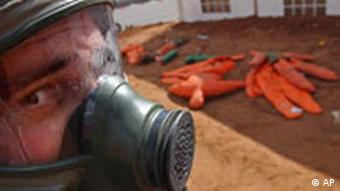 If the bacteria are spread among a large area, a single gust of wind could destroy months of planning by terrorists.

The most serious threat currently is the small pox virus, since it is the only virus that has ever been largely eliminated. It is highly infectious and most people under 30 are not vaccinated against it. However, Bhakdi does not see any reason to store up large amounts of the vaccine in case of an attack.

"Germany has 100 million doses of vaccine stored at a secret location, which costs a half billion euros," he said. "That money could be spent more wisely," he added, since "there's no reason to spend ourselves into bankruptcy."

Despite all the talk about danger and the fears that the anthrax cases in the US raised, among many professionals bioweapons only place third in a ranking of the globe's most serious medical threats.

In first place are flu epidemics or AIDS (which have killed millions worldwide so far). A similar threat is posed by highly infections diseases that periodically make comebacks, such as Ebola or the West Nile virus. Other dangers include industrial sabotage or lab accidents that could release large amounts of pathogens as well as the growing global resistance to antibiotics.

The Bundestag on Friday voted to extend the deployment of about 500 maritime soldiers stationed in the Mediterranean and off the Horn of Africa in order to continue the fight against terrorism. (Nov. 12, 2004)

Security experts from 40 countries are meeting in the Saudi capital Riyadh this week to discuss ways to fight terrorism. (Feb. 7, 2005)

Fighting terrorism in Europe is as varied as the continent's cultures and legal systems. And that, say investigators, could become a major problem. (Nov. 22, 2004)