Europe Focuses Anti-Terror Efforts | News and current affairs from Germany and around the world | DW | 22.11.2004

Fighting terrorism in Europe is as varied as the continent's cultures and legal systems. And that, say investigators, could become a major problem. 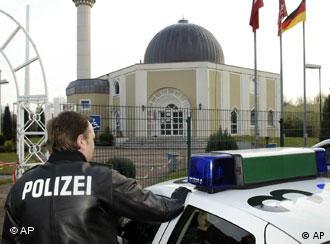 At the moment, Mamoun Darkanzali is sitting in a Hamburg jail cell. But in a few weeks, the Syrian-German businessmen will face a Spanish judge on charges of recruiting Islamic terrorists.

The arrest and pending extradition of Darkanzali under a new EU-wide arrest warrant, illustrates the progress Europe has made in the period since terrorist attacks in the United States and, most recently, in Madrid last March showed Europeans the dangerous face of Islamic fundamentalism.

Now that the murder of Dutch filmmaker Theo van Gogh, allegedly by a Muslim radical with both Dutch and Moroccan citizenship, has lent new urgency to Europe's anti-terror fight, investigators are concerned that the continent's varying approaches to tackling the problem could prove to be a dangerous hindrance. 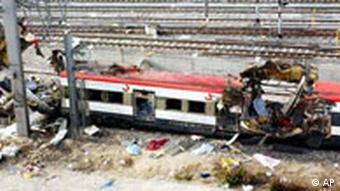 The bombing at the Madrid train station killed 131 people and injuring hundreds more.

“I think this is a problem for Europe,” said Rafael Gasso, the chief inspector for the Spanish police, and current president of the European Council of Police Unions in an interview. “If we don’t advance on this as we are in the Monetary area, or other areas, we already have problems and we will have problems in the future.”

Hitches in intelligence sharing, and the flow of information between national law enforcement and security agencies on the European level is mirroring similar problems within each country. German security officials, for example, have been at pains to improve data-sharing since the Sept. 11 attacks, with only marginal success, say critics. 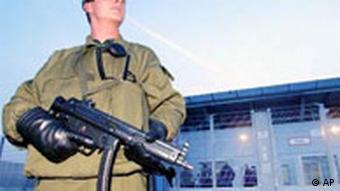 Germany's law enforcement: each to his own

“They gather information, each on their own, and don’t compare it to one another,” said Jansen, one of German law enforcement’s most persistent critics. “They hide behind legal barriers and say, as long as it’s not legally approved, it’s not possible.”

The same criticism applies on the European level. Following the Madrid attacks a top German justice official complained that Spanish police guarded information on the attackers, rather than contact investigators across Europe to see how they could have helped.

EU can only do so much

In recent months, the EU established a center for intelligence analysis that brings together experts from intelligence and security services. There is also talk of introducing two biometric identifiers on each European identity card to combat identity fraud, an easy way for terrorists to slink in and out of the EU.

But de Vries, in testimony to members of the US Congress in September, acknowledged that the powers of his position only went so far.

“The role of the Union is still relatively limited,” he said. “Most of the instruments and competences in the fight against terrorism remain in the hands of the member states.”

Up to now those methods have been varied. Britain and France, countries that have long and violent histories with domestic terrorism, have taken relatively tough approaches in combating Islamic fundamentalism. Britain’s 2002 anti-terror law made it the only European country to suspend article five of the European Convention on Human rights which forbids the arbitrary detention of suspects without appearing before a judge. 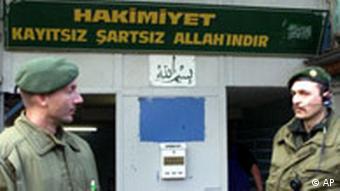 Police officers outside the mosque of the Caliph State of Cologne, whose leader, Metin Kaplan, was deported to Turkey earlier this fall

France’s strict separation of church and state has enabled prosecutors to crack down much harder on Muslim imams railing against the Western world in their Friday sermons. Early this summer, the country deported several imams whose preachings French prosecutors deemed inflammatory.

Interior Minister Otto Schily wants to give the Federal Bureau of Criminal Investigation more “preventative” anti-terror capabilities and set up central register of Islamic extremists that would combine the information gleaned by Germany’s various law enforcment agencies into one databank.

Both German and Dutch politicians have been calling for a tightening of immigration policies that will make it tougher for foreigners to get in the country and easier to deport foreigers with extremist tendencies.

The proposals may bear resemblance to tough measures taken in the US following the Sept. 11 attacks, but experts say any similarities are fleeting. No one expects European countries to go much further in changing criminal or immigration legislation – yet.

“I don’t think we should change our point of view, we should not make our laws more aggressive,” Franz said. “But that may change, depending on a threat or attack.”

European Union interior ministers are meeting in Brussels on Friday to discuss how to deal with terror in the wake of last week's Madrid terrorist attacks. (March 19, 2004)

European investigators have called for more efficient cooperation in the fight against terrorism. But conflicts of interests and privacy issues, especially in Germany, are undermining investigations. (Nov. 5, 2004)