How Hindu nationalists are dealing with India′s colonial past | Asia | An in-depth look at news from across the continent | DW | 08.09.2021

How Hindu nationalists are dealing with India's colonial past 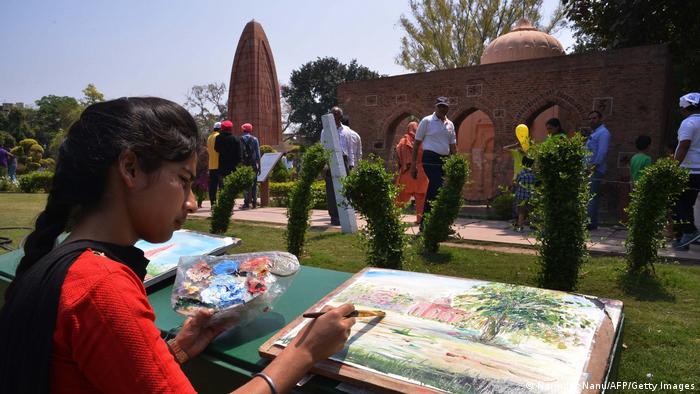 Critics have accused Indian officials of attempting to downplay the brutality of the British colonial era, following recent renovations carried out at the Jallianwalla Bagh memorial in India's Punjab state.

The alleged removal of the traces of a 1919 massacre, which by some estimates left around 1,000 people dead, has also irked prominent historians.

The Jallianwala Bagh massacre, in which British troops surrounded peaceful protesters and fired at the crowd, was a turning point in India's nationalist movement.

"This distortion of history is being done to many historical sites including Gandhi's Sabarmati Ashram," historian Chaman Lal told DW.

The Bharatiya Janata Party (BJP)-led Gujarat government has started renovations at two historic structures associated with Mahatma Gandhi in Ahmedabad: the Sabarmati Ashram, popularly known as Gandhi Ashram, and the Sabarmati Central Jail, both places where India's "Father of the Nation" spent several years of his life.

"It is being done by those who neither participated in the freedom struggle nor have any respect for it," Lal said.

Demolitions at the Central Vista

Another example is the ongoing renovation of the Central Vista in the heart of the capital, New Delhi. Prime Minister Narendra Modi's government is out to change this 35-hectare (8.6 acres) area filled with iconic heritage landmarks into a public area with museums and government buildings.

The €2.1 billion ($2.5 billion) makeover will require demolishing several buildings and redesigning spaces such as Parliament House, Rashtrapati Bhavan or the Presidential Palace, India Gate and the War Memorial.

Changing names of cities, monuments and roads has been an ongoing process in independent India. Since 1947, various governments have done away with numerous symbols of British colonial rule.

But historians say that what is being witnessed is both an attempt made by a government to hide facets of the popular historical memory, and a result of nationalism.

Critics say the real intent of the Central Vista is laid bare in the bid document; to create new iconic structures that "shall be a legacy for 150 to 200 years at the very least."

"The Congress party changed textbooks, and got rid of British names and statues and repurposed buildings," historian Narayani Gupta told DW. "But the BJP's version of the past is being used to legitimize Hindu majoritarianism."

'Apathy to the British period'

Eminent historian Romila Thapar, whose core area of study is ancient India, puts matters into context. She points out that the BJP's electoral resurgence has brought an alternative nationalism to the fore.

"Every political party wants to endorse its own ideology. The BJP was not a major player in the anti-colonial struggle, thus its apathy to the British period," Thapar told DW.

In its attempt to appeal to its voter base of Hindu nationalists, the BJP is trying to erase India's Mughal legacy both from the landscape and from history books, say observers.

The Mughals had a more than 300-year presence on the subcontinent and exerted a significant influence on Indian art, architecture, language and cuisine.

Analysts say the recent renaming of cities such as Allahabad to Prayagraj and Gurgaon to Gurugram, after Guru Dronacharya, an upper-caste Hindu figure from the epic Mahabharat, as well as railway stations and airports, is part of a bigger project to see the spread of the BJP's political footprint.

In 2018, the local branch of the BJP wanted to rename the Himalayan hill town, Shimla, established by the British in 1864, after the Hindu goddess Shyamala Devi.

A move to rename towns

In recent years, federal and provincial BJP governments have launched a drive to rename several towns in an attempt to resurrect India's Hindu past.

"Both the BJP and the Rashtriya Swayamsevak Sangh (RSS), the parent organization of the BJP, have a simple black and white narrative of Indian history," media historian Rakesh Batabyal told DW.

According to Batabyal, rewriting Indian history and teaching their version of it is crucial to justifying the ideology of Hindu nationalists. The biggest impediment to the ideology was the national freedom movement, through which the process of nation-making in modern-day India had been founded.

The memory of Congress leaders such as Mahatma Gandhi and the country's first Prime Minister Jawaharlal Nehru is honored throughout India in the form of public monuments and landmarks.

However, this does not sit well with the ruling BJP. Its move to elevate Deen Dayal Upadhyaya, an early leader of the RSS, is an attempt to insert one of the founders of its political creed into the public memory of India's independence struggle.

Those critical of this "Hindutva" history are already being labeled anti-national in an attempt to subvert historical research.

Opinion: India must address its lack of ethics

Ethics have always been absent in Indian society. To prevent another humanitarian crisis, it must address that fundamental problem, writes Ankita Mukhopadhyay.