How Ghana can help us understand the EU

We're aware that Europe is really far away from the African continent. Here's what the bulky construct of the EU means to its members and how to become part of the club — explained with something closer to home: Ghana. 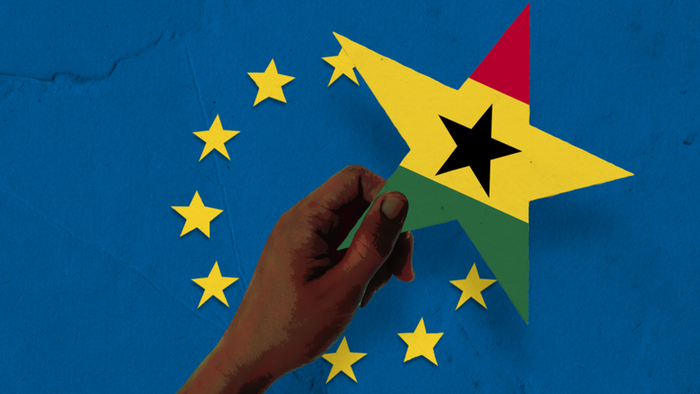 This is a thought experiment to help you understand better how the EU works. In our scenario we are replacing Great Britain with another "G" country in order not to mess up the EU's alphabetization: Ghana.

Eddy Micah Jr., a DW journalist from Ghana, has a couple of thoughts on what his country could add to the EU.

Eddy's skepticism isn't unjustified. Even in some member states, the EU doesn't have the best image: There's a lot of red tape, and it's cumbersome, increasingly isolated and anything but in touch with its citizens. After all, voters in Britain even decided to leave the union. Membership in the EU also has its benefits, however — and high among them are the promises of security and prosperity.

Ghanaians would have to vote for their country to join the EU — a "Ghentry," to stick with the terminology of "Brexit." In addition to the referendum, candidate countries have to meet four criteria for membership:

How to become an EU member state

If Ghana were to meet all these criteria, Brussels' power would begin where Accra's power ends: at the country's border.

The EU is not allowed to interfere in matters that a country can handle effectively at the national or local level. However, the EU takes command when a task is bigger than a single country and more can be achieved if all member states act in concert.

Eddy says Ghana — even without EU membership — has untapped potential:

"Ghana has still a long way to go"

Should Ghana fulfill all the necessary criteria for accession, the benefits of EU membership would include:

FREEDOM OF MOVEMENT — Better wages in the EU?

Ghana's unemployment rate of 2.4% is significantly lower than that of most EU countries. However, many Ghanaians cannot make a living from their work: The average wage per hour is only 1.17 Ghana Cedi (€0.22/$0.20). Even the lowest minimum wages in Europe are more than 10 times higher.

In our scenario, people who couldn't find satisfactory jobs in Ghana could search elsewhere within the EU. If Ghana wanted to prevent brain drain, employers would have to pay competitive salaries. That’s how EU membership could raise Ghanaian wages in the long run.

EDUCATION — Studying in Kumasi and Bologna

The EU's Erasmus+ exchange program enables students, trainees and teachers to complete part of their education in another EU country. Participants, who do not have to pay tuition fees, receive pocket money from the EU and can have their courses credited toward their degree.

Without an Erasmus scholarship, the costs of studying in the EU vary: from completely free, as in Sweden and Denmark, to a few thousand euros per semester, as in Italy and Spain. Education in Europe is rarely as expensive as tuition and fees in the United States.

Ghana certainly shares Europe's passion for education. The country spends 20% of its government budget on education — one of the highest shares worldwide, and far more than any EU country.

ECONOMIC SOLIDARITY — give and take

The members who perform well economically pay for those who need support. Who pays how much money or what it is spent on is often hotly debated among EU heads of state.

If Ghana were to join the EU, it would have to pay about 1% of its gross national income, part of its VAT-based income and some customs tolls to the EU every year. In return, the country could then expect quite a bit in subsidies in the first few years. But, if Ghana's economy were to continue to grow as strongly as it does even without EU membership, this could change over time. Ghana, like the other net contributors to the EU, would then have to support the remote regions of Finland, for example.

Ghana is the second-largest cocoa producer in the world — and Europe is already the largest buyer. The finished Ghanaian chocolate, on the other hand, rarely finds its way into European supermarkets. The reason is a financial one: While Ghana can export cocoa beans duty-free to the EU, a tax of 15% of the value of the goods is levied on chocolate.

If Ghana were a member of the EU, it would automatically also be a member of the internal market, in which goods can cross borders duty-free. This would allow European tongues to enjoy dark Ghanaian chocolate with sea salt.

SUBSIDIES — Strengthening and weakening the economy

Just how effective an economic union such as the EU can be — in both positive and negative terms — is evident in its subsidies, because the consequences extend as far as Ghana. Example: poultry farming.

The Ghanaian market has almost collapsed because of imports from abroad. Subsidies — for animal feed for example — allow EU farmers to produce more cheaply and offer the meat at a lower price: A Ghanaian chicken costs the customer up to four times as much as an imported one.

If Ghana were a member of the EU, Accra could work for a more compatible export policy. Pragmatically, it would mean that Ghanaian poultry farmers would also receive subsidies.

In fact, Eddy says, both sides would benefit from closer economic cooperation:

"We want a fair chance to compete"

In the end, Ghana does not need to become a member of the EU in order to enjoy the benefits of a state union. In fact, in 1963 Ghana was one of the founding members of the Organisation of African Unity, which became the African Union almost 50 years later. Today, all African nations are AU members. United in diversity, the AU wants to be Africa's voice in the world, promote cooperation between African states, secure peace and democracy. It is the African equivalent of what the EU wants to represent for Europe.

Nearly half of Ghanaians say the AU has helped their country — citizens of member states say on average the same thing about the EU. But this also means that the other half thinks the opposite or doesn't know enough about the work of the AU or the EU, respectively. So there is still room for improvement for both. That's not the only thing they have in common, Eddy says:

"There is unity in diversity"

A look at the faces of Ghana

A look at the faces of Europe

"There lies Europe. What does it look like? Like a colorfully painted madhouse," Kurt Tucholsky wrote in the 1932 poem "Europe." What has changed since then? As the faces of Europe show, it's worth fighting for unity. (29.05.2019)