He makes Japan-inspired china and relates his metal chair to car fenders. Young German designer Stefan Diez is influenced by his time in Asia, but pays tribute to German craftmanship. His work is on show in Cologne.

"It's showtime!" The 2017 international design season has begun. Running parallel to Cologne's international furniture fair, the imm, the exhibition series "Passagen" has invited the public to its Interior Design Week. Cologne has long enjoyed the reputation of being a "design mecca" for young creative artists.

The imm offers a broad spectrum, providing a range of innovative design workshops, international networking with start-ups and renowned furniture producers. It doesn't only present new trends, but also classical furniture design - quite often with a modern touch.

The Cologne Museum for Applied Arts (MAKK) has devoted an unusual show to a single designer - Stefan Diez. He is one of the most significant young designers who presents his worksnot only as perfectly illuminated museum exhibits, but also explains how they were produced. 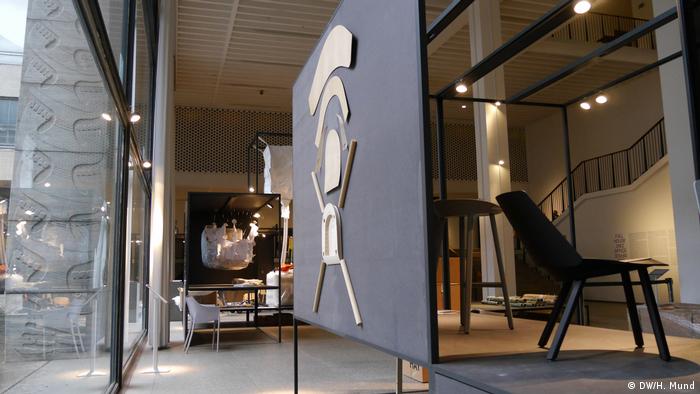 Furniture design with an emphasis on clear forms

Stefan Diez was born in 1971 to a cabinet maker's family in the town of Freising near Munich. Before studying industrial design at the State Academy of Art and Design in Stuttgart, he was trained as a cabinet maker. He then assisted the designer Richard Snapper as a student of industrial design - a good opportunity to gain insight into serial production. Then Diez then went on a long journey to India where he created his first original pieces of furniture. What he took home to Europe were designs with a distinctly Asian flair.

Later on, he worked as an assistent in the team of star designer Konstantin Grcic. In 2003, Diez founded his own studio and began to design all kinds of things ranging from conventional pieces of furniture like chairs, tables and couches, to innovative lamps, practical suitcases, and futuristic kitchen appliances. He even got involved in the serial production of fancy china by an old Japanese manufacturer.

Diez's works are meant to be beautiful, but not necessarily trendy; not complicated, but easy to handle. Museum director Petra Hesse sees Diez as a representative of a young generation of designers who work in an international setting, but without dismissing their roots in German craftsman traditions. "If you want to live and work in a globalized world, you have to take cultural traditions of other countries into consideration," she said. "That's the big challenge."

Good design doesn't have to be expensive

Together with his team in Munich, Stefan Diez doesn't only rely on original ideas, but even more so on solid craftsmanship. He perforates a simple stackable chair like a car body part before forming it with an industrial press. The single parts of his designer pieces, like the metal frame of a table (pictured below) have been artistically draped in colorful exhibition booths. The museum hall at the entrance is flanked by a 20-meter-high shelf system made by Diez. Some of the model chairs, exhibited as solitary objects, once again reflect his formal principles as a designer. "It sometimes takes us years to develop a project," said Stefan Diez. His first prioritty is to use the simplest possible materials. 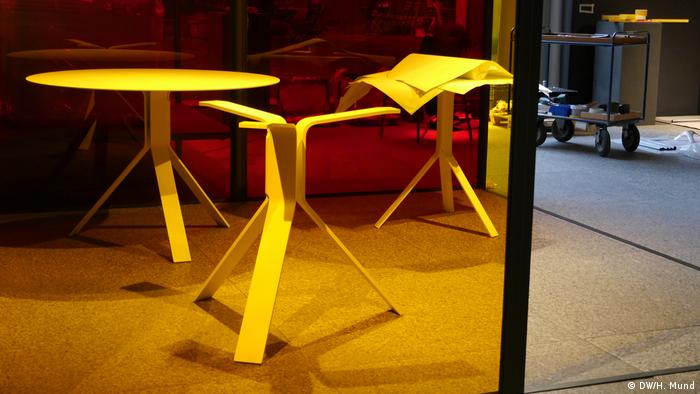 Diez opts for serial mass production of beautiful design objects in order to make them affordable for average customers. He has invented a simple turning mechanism for an affordable office chair for a mass discounter that meets his requirements in form and functionality. "Good design doesn't need to be expensive," he told DW. That's one of the reasons why some of his pieces were awarded the Design Award of the Federal Republic of Germany as well as the Red Dot Award.

The power of materiality

Every aspect of Diez's design ideas is structured. He now produces design classics for big companies like Thonet, Bosch and Rosenthal. Globalization and international connections have opened up new opportunities for the industry. Diez loves to experiment with classical Asian materials like bamboo, which which he produces light, but extremely stable benches and tables that are sold worldwide.

"In the early 2000s, it became possible, also for smaller companies in Germany, to find affordable production companies in Asia - something that hadn't yet been possible in the 1990s," he said while walking around his exhibition. "Suddenly, there was this incredible run on Asia."

It became possible to produce prototypes made in his German design studio very cheaply in China and to transport them back to Europe packaged in environmentally clean cardboard boxes to then be assembled in Europe.

Many of Diez's designs ended up being mass produced as industrial designs. This process is presented as a "work in progress" in the Cologne exhibition. Also shown are particularly creative projects that weren't mass produced. Among the exhibits is a beautiful design in all its various stages of development for the famous Thermomix, a kitchen appliance that cooks by itself. It hasn't be realized yet, but could start appearing in kitchens by 2020. 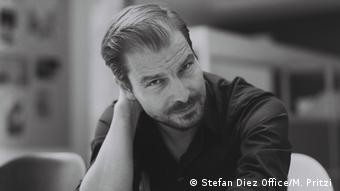 Form as a principle of order

The focus on his objects in the "Full House" exhibition is on the decisive moment when a realizable form for an idea comes into being; the museum took on that principle in its exhibition scheme.

In the eyes of production companies, some of Diez's designs, however, are too modern or too simple. Diez cherishes the functional simplicity of industrially made materials, similar to materials that can be bought in hardware stores. For example, he uses cheap, net-like plastic sheaths for creating floor lamps - the same material that is used for bundling cables. The coloring and artistic form of the floor lamps are, however so impressive that they could just as well be exhibited as sculptures.

The exhibition "Full House: Design by Stefan Diez" runs through June 11, 2017, in the Museum für Angewandte Kunst (MAKK) in Cologne.

There is no "Berlin style," claims Christiane Arp, the editor-in-chief of "Vogue" Germany, ahead of Berlin Fashion Week. She also told DW why German designers should trust their strengths and not look to Paris. (17.01.2017)

The new museum in Dessau is slated for completion in 2019 to mark the 100th anniversary of the Bauhaus art school's founding by Walter Gropius. (05.12.2016)

Fashion icon Jean Paul Gaultier takes his talents to the stage in Berlin by designing costumes for "The One." The new revue show is the most expensive and highest-selling to date at the Friedrichstadt-Palast. (05.10.2016)