How French cartoonists reacted to the election results

After Sunday's first-round vote, it is now clear that either the centrist Emmanuel Macron or far-right candidate Marine Le Pen will be the next president of France. Here's how French cartoonists reacted online. 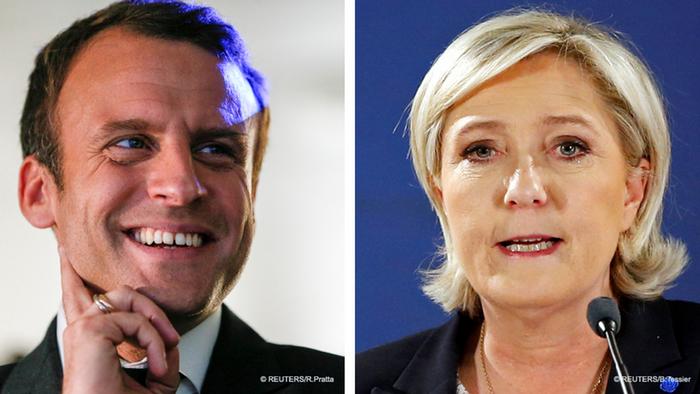 Two candidates are left after the first round of elections in France. Centrist candidate Emmanuel Macron is seen as beating far-right candidate Marine Le Pen by 61 percent to 39, according to most recent polls quoted by Reuters on Monday.

Reacting online, most French cartoonists also took for granted that Emmanuel Macron would become the next French president. Perceived by some as the lesser of two evils facing the Front National's leader, many drawings indicate skepticism towards this politician. Macron is running as an independent candidate, promising reforms with his new movement called "En Marche!" (Forwards!).

The cartoon is headlined, "Macron leads after the first round," and the character declares: "After being deceived by the right and deceived by the left, the French voter has decided to try out deception at the center."

Loïc Sécheresse similarly commented on the elections by showing Macron at the steering wheel, in a cartoon which he headlined "The second round Uberized." He refers to the ride-sharing app Uber, which has sometimes been criticized for allowing untrustworthy drivers to take on customers.

The people sitting at the back of the car specify that they're going neither right nor left. Macron answers, "OK, then we're heading straight into the wall."

Even more pessimistically, the same cartoonist offers another conclusion to the current elections:

"Good news," he states in his tweet, "we will all die in 15 years," attaching a cartoon stating: "Le Pen vs. Macron - Global warming, the forgotten factor," accompanied by two symbolic representations of the candidates, a Nazi salute and an "En Marche!" in a speech balloon. Both characters are hidden under water.

Thoughts for the disappointed left

Meanwhile, some cartoonists analyzed how the left lost because of vote splitting.

Plantu therefore drew both left-wing candidates riding in opposite directions on one bike, in a cartoon entitled "The losing machine":

Cartoonist Soulcié also had a few laughs dedicated to Mélenchon's disappointed fans, known as the "Insoumis."

The same artist also predicted the complete extinction of the left in a cartoon he drew for French daily "Le Monde":

It shows a tour guide in front of the famous entrance of the Louvre museum, explaining: "And here is the pyramid, last remain of the socialist civilization, now disappeared."

Beyond disappointment, the remaining options are seen as equally dissatisfying by cartoonists.

Allan Barte expressed this view through a series of two drawings:

The first one shows two people observing posters of the two candidates, saying, "Until now, I believe I hadn't realized the appropriateness of the expression…  Élection, piège à cons" (an anarchist slogan from May 1968, which means elections are a trap for idiots).

The second drawing is "a variation on the same theme," tweets the cartoonist:

Instead of reflecting on the French 1968 slogan, this cartoon rather draws on a pop culture reference: The two voters are replaced by the fictional Star Wars character, Admiral Ackbar, most famous for his catchphrase, "It's a trap!"

Centrist Emmanuel Macron or extreme-right candidate Marine Le Pen will be the next president of France. With mainstream parties eliminated, Macron is the favorite according to new opinion polls. (24.04.2017)

'A bit of a loss for France'

Voters in Paris have expressed surprise over the National Front's historic show of support in Sunday's presidential election. Many see the run-off as a shift to the right in the traditionally left-leaning country. (24.04.2017)