With four stories of chilling exhibitions, a museum in Hungary's capital Budapest is dedicated to those who were interrogated, tortured and killed during the two bloody periods of Nazi and communist rule. 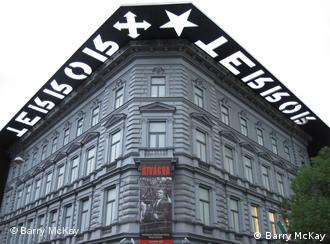 The former prison is accessible to the public

The House of Terror Museum is located in the building which served as the successive secret police headquarters of both Hungary's fascist and communist governments.

The Nazi-affiliated Arrow Cross party took over Hungary in the last months of World War II. During the regime's short rule from October 1944 to January 1945, 80,000 Jews were deported to the Nazi death camps, while an estimated 20,000 Jews were killed outright – hundreds of them in the basement of the building which now houses the museum.

When the communists came to power after the Soviets liberated Budapest in 1945, their secret police (known by the abbreviation AVH), moved into the former fascist police headquarters. There, police interrogated, tortured and executed those considered an enemy of the state. 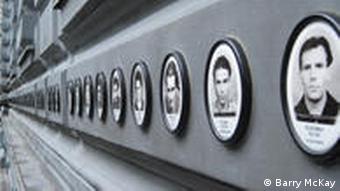 Now, visitors can walk through the former interrogation rooms and prison cells, and watch videos of interviews with former detainees as well as old propaganda films – all of which illustrate the horror of living in Hungary in these two periods.

Many people have difficulties imagining what it is like to live under a totalitarian terrorist dictatorship, said Maria Schmidt, the director-general of the House of Terror Museum. 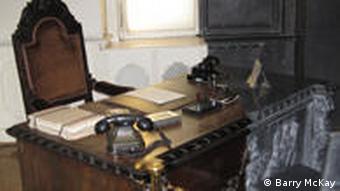 "People were afraid to say anything which was not dictated by the party," she said. "They had to obey orders from the state in every respect, and anybody who was seen by the regime as a threat or an enemy was persecuted."

Perhaps the most chilling part of the museum, which first opened in 2002, is a series of concrete rooms in the building's basement, where prisoners were interrogated and tortured. Instead of glass, the windows are lined with bars, and bleak wooden benches with a few blankets strewn over them show where prisoners would have slept – when they had a chance to, that is. 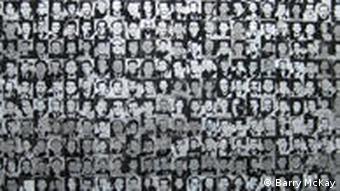 Featuring a giant wall covered with portraits of former detainees, the museum also serves as a memorial to those who suffered within the building. One such detainee is Laszlo Regeczy Nagy, who was arrested by the AVH for aiding the political insurgency against Soviet-rule during the 1956 Hungarian revolution.

"I spent seven months in solitary confinement and for those long months you would never see anyone other than your guard and your interrogating officer," he said. "Sealing (the prisoners) off from everyday life ... was an effective method of losing contact with reality."

During this period, Nagy was constantly subjected to sleep deprivation, being woken up "many times" during the night.

"We were never allowed to sleep properly," Nagy said. "So many things happened during the daytime that we needed a sleep, but we could never have one; and during the day, they always pestered us." 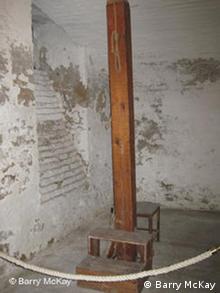 The basement also houses the rooms where interrogation and torture took place – there's a padded cell; a tiny room with basic wash facilities; a small confined area about half a square metre in size for locking up those in solitary confinement; a water torture chamber; a room for giving electric shocks and an execution chamber where a noose hangs ominously from the ceiling.

The aim of the secret police interrogators was often to torture the detainees into confessing real and imagined crimes. Once they had confessed, the prisoners were then disposable.

"Everybody knew that it was very easy to come (to the AVH headquarters) alive, but much more difficult to leave it alive," Nagy said.

"If you were sentenced to death, then you were simply transferred to a prison and hanged there the next day."

For former prisoner Nagy, the museum has an important role in reminding the present generation of the past. He also says that for his generation, it's "exciting" to have access to material which was hidden for half a century.

Hungary is planning a law that would tax poker winnings and regulate clubs. With the country facing its worst economic crisis since the end of communism, the government is eager to cash in on this popular pastime. (26.10.2009)

The German edition of the "Financial Times" reports that more than 17,000 former members of East Germany's dreaded Stasi secret police have been holding down jobs as civil servants in reunified Germany. (09.07.2009)

European leaders have assembled in the Hungarian capital Budapest to mark the 20th anniversary of the symbolic fall of the Iron Curtain that divided the continent during the four tense decades of the Cold War. (27.06.2009)

Listen to a report on the situation in Hungary in 1989