Six people have been rescued after their hot air balloon crashed into power lines in the western German city of Bottrop. Rescuers had to individually abseil the passengers down to safety in an hours-long operation. 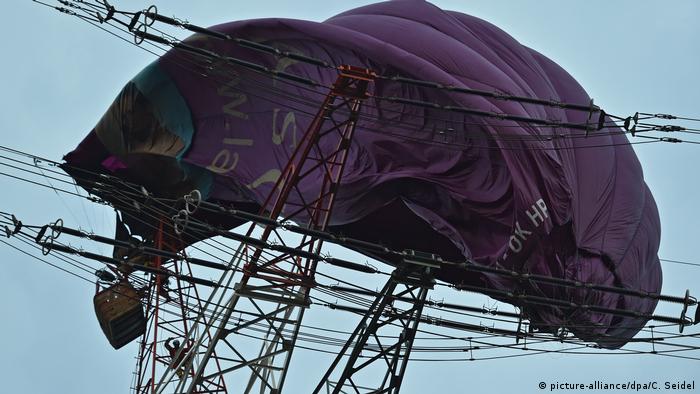 A hot air balloon carrying six people collided with an electricity pylon in the western city of Bottrop on Sunday evening, police said.

The balloon became entangled on the power lines some 70 meters (230 feet) above the ground on Essen Street in the town of Bottrop.

A fire department spokesman said all six passengers had been rescued, with the last person brought down at about 11:20 p.m. local time, more than five hours after the balloon crashed. The six were taken to hospital as a precautionary measure.

Initial reports said the passengers were unharmed and were able to communicate with the fire brigade by phone.

In a tricky rescue operation, the power was cut off at the affected area and authorities secured the balloon's basket to ensure it would not fall any further, a fire department spokesman said. The passengers were then rescued one-by-one by abseiling down a rope to safety.

The spokesman said the passengers had been lucky that only the balloon and not the basket had come into contact with the power line, as the balloon does not conduct electricity.

In June, a hot air balloon crashed in the nearby region of Münsterland, injuring six people.

Franz Taucher has fulfilled his dream. He's flown across the North sea from  the German island of Heligoland, to the mainland - in a hot-air balloon!  (31.10.2016)

Are our helium reserves coming to an end?

Helium is a supposedly rare resource. Now, hopes are focused on newly discovered deposits in Tansania. Geologists remain optimistic - looks like we'll continue to be able to fill our balloons. A shortage isn't imminent. (01.07.2016)