Businessman Horacio Cartes of the Colorado Party has been declared Paraguay's new president, according to electoral officials. His main rival Efrain Alegre has conceded defeat. 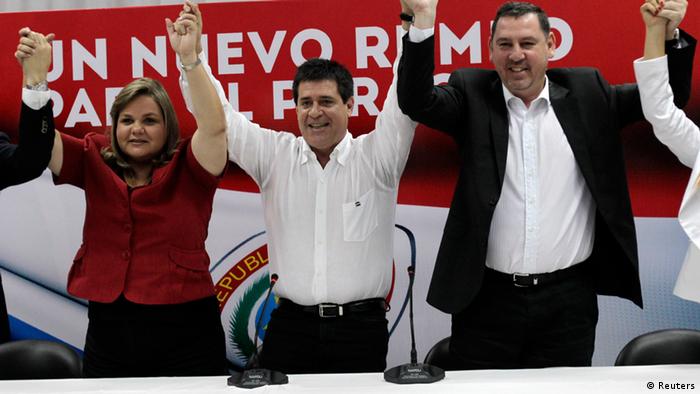 The electoral board announced on its website that with 35 percent of precincts reporting, Cartes had 46.1 percent of the vote and Senator Efrain Alegre of the ruling Liberal Party 36.9 percent.

Thousands of Colorado Party supporters wearing red shirts and scarves honked their horns and blasted music in the capital Asuncion to celebrate their party's likely return to power.

Cartes, who joined Paraguay's powerful center-right Colorado Party four years ago, is a political novice. He has vowed to reform the party, which was soiled by corruption during its 60-year reign through 2008.

Paraguayans head to polls, and to banks?

People in the Paraguay are likely to elect the Colorado Party, which was in power from 1947 to 2008, back into office as they head to the polls. But widespread vote buying threatens to cast a shadow over the election. (21.04.2013)

His main rival, Efrain Alegre, is a lawyer and career politician in the ruling Liberal Party.

Both Cartes and Alegre represent the parties that moved to impeach former President Fernando Lugo. A leftist and former Roman Catholic bishop, Lugo was dismissed by Congress after being found guilty of mishandling a land eviction that resulted in the deaths of 17 police officers and peasant famers.

Since Lugo's impeachment, Liberal Party member and his former vice president, Federico Franco, has been at the helm. But he did not stand as a presidential candidate in the election.

Most of Paraguay's neighbors viewed Lugo's impeachment as a coup and, in turn, imposed diplomatic sanctions. Paraguay's membership in the Mercosur common trade bloc and the Unasur regional group were also suspended.

It is hoped that the installation of a democratically elected president, who should be sworn in this August, will help restore Paraguay's diplomatic ties in the region.

Leading up to the election, Cartes had been polling about 10 percentage points ahead of Alegre, but the Liberal Party candidate bolstered his chances for success last week by forming an alliance with the nationalist Unace party. Unace lost its candidate, Lino Oviedo, in a helicopter crash in February.

The run-up to Sunday's vote was marked by a negative campaign between Cartes and Alegre, who have exchanged accusations of corruption and drug trafficking.

Polls were open from 7 a.m. to 4 p.m. (1100 to 2000 GMT) and international observers said they had received no fraud complaints by midday. Voters also elected local authorities and members of Congress.