The e-waste dump Agbogbloshie exemplifies the downside of globalization: It's the bitter end of a supply chain where children, instead of going to school, wander barefoot gathering bits of salvaged metal for pennies. 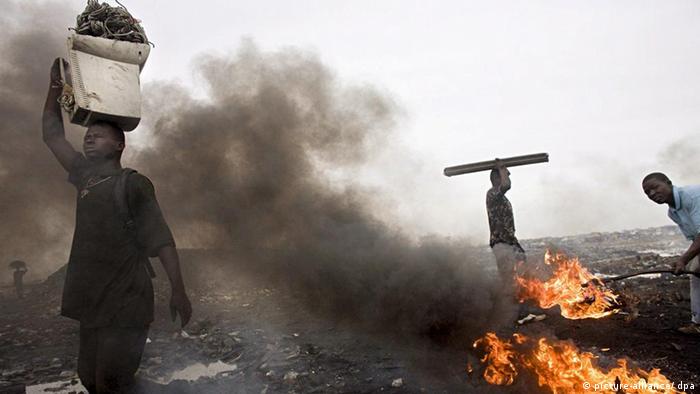 Black, poisonous smoke darkens the sky above Agbogbloshie, the final destination for electronic waste shipped from all over the globe. Some 50,000 people, including many children, live here - at one of the world's largest e-waste dumping grounds.

Literally tons of old electronics burn in countless open fires, making my skin burn and itch as I walk through the grounds. There's a metallic taste in my mouth, and my head throbs. Meter-high, dazzling, green flames release huge wafts of black, poisonous fumes. It's like an apocalyptic painting come to life.

People burn the cables and circuit boards to get the poor man's gold within: copper, aluminium, lead - valued raw materials for industry.

Badugu is 25 years old. He can't say how long he's been getting copper coils and metal plates out of old radios. He only knows that he has no choice - this is his livelihood.

"I want money, that's why I come do this work," he says. "Today is very bad," he added. He describes himself as having a "problem inside" due to all the toxic smoke.

Next to Badugu, several children are busy breaking apart old televisions. Some kids drag speaker magnets strung on cords behind them, wandering the grounds for hours so bits of metal stick to the magnets. They then sell their catch - bits of circuit board, screws, aluminium, copper - to metal traders next door. Their income amounts to just a few euro cents.

Wearing plastic sandals and a torn T-shirt, Peter stands on a mountain of glass shards, old freezers, copy machines and car batteries; at his feet, pink ink from printer cartridges coat the black ground. He shows me his arms and legs, which are covered in cuts from broken glass and sharp slivers of metal.

"I'm sick in my head," he says, describing his constant headaches. Many children here have breathing problems, and cough up blood. Some, Peter says, also have problems with their eyes. His siblings work here as well. Peter's mother sells sweets on the street. He doesn't know where his father is.

"I want to get money, take my money and go to school. That's why I am here," Peter says forcefully. 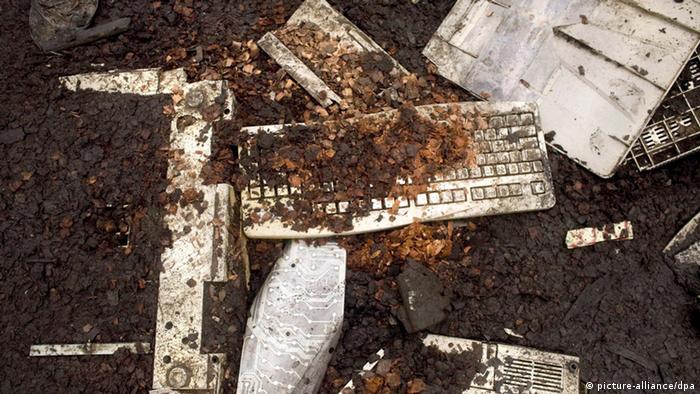 The grounds are full of heavy metals from televisions and computers. Toxic brominated flame retardants, which inhibit the ignition of combustible organic materials, are all around.

The children who live and work here have a wide range of ailments - from kidney disease, to liver malfunction, to problems with other organs. Ghanaian environmental activist Mike Anane, who's been coming to Agbogbloshie for years, can attest to the toxic effect on the kids.

The children's illnesses are "a result of their exposure to e-waste from the industrialized countries," Anane says.

Anane has been gathering evidence on how the rich Western world is dumping its electronic waste in Africa. "From Germany, from Denmark, China - the world's computers, television sets, e-waste. They all come here to die!" he says. This waste is destroying the environment - and making people sick, he adds.

"Will this ever stop?" he wonders. 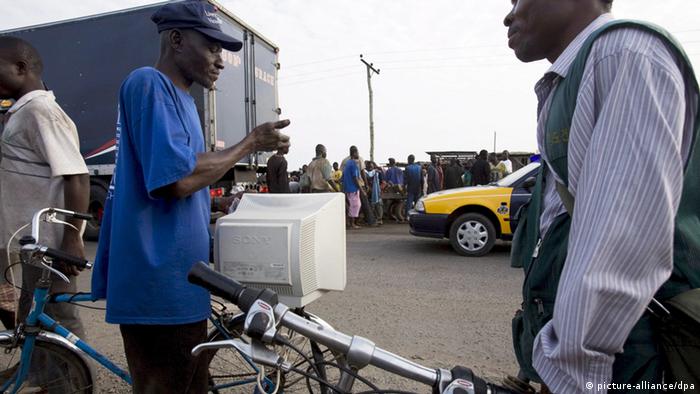 Despite months of inquiries, phone calls and emails, as well as personal visits to municipal offices, Ghana's officials wouldn't agree to be interviewed. Only Mike Anane seems able to provide information on the dump.

"In the past, a lot of dumping used to go on in Nigeria as well. E-waste seems to go where the economy is booming, where trade seems to be increasing," Anane says. With Ghana's international trade also came e-waste. "It is very easy for the organized crime involved in this activity to slip these containers into our ports," he points out.

The Basel Convention, which some 170 nations have signed, forbids the export of technological waste from Europe. Despite this, about 500 containers full of old electronic devices land in Agbogbloshie every month. They are declared as used items, and are therefore fully legal. Some exporters even believe that they are helping Africans, Anane says.

"But there is no way that we can properly recycle or properly dispose of this toxic electronic waste," he states. 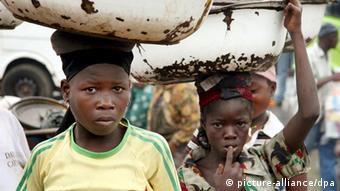 In neighborhoods around the dump, shops have taken over entire lanes to sell the electronics.

Rockson is one vendor who sells everything: old air-conditioning parts, car batteries, microwaves. The apparent bestsellers are flat-screen displays, the merchant says, which sell for 200 cedi - about 100 euros.

He gets most of his wares from Italy. The rear section of the shop is stuffed with old Italian newspapers, insulation from the transport container.

"It's a good business - we have a lot of customers," Rockson says. Ghanaians trust original brands, not cheaper Chinese copies, he adds.

I discover some items from Germany - much to Rockson's delight. A small battery-powered vacuum cleaner has made its way across oceans to this store. "Yeah, very, very good quality, they like it," Rockson says.

Rockson admits that not all of the items actually work. "We buy in bulk, we buy quantities or we buy untested," he says. Many of the items appear to be 10 to 20 years old.

E-waste trading has been going on in Accra for about a decade. From every container, perhaps 15 or 20 percent of the devices work - the rest is sold to scrap dealers for the boys to pick through. 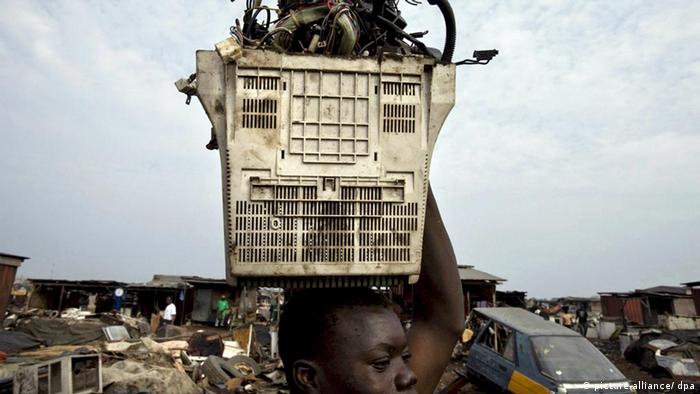 Back at the dump, 18-year-old Maxwell is tending a big fire. Along with some friends, he's burning up old heaters and auto parts. His eyes are frighteningly yellow - a sign of liver stress. Maxwell, too, has come to Accra from a poor village in northern Ghana.

"My mother and father, we don't have anything," he says. "That's why I am here, to work," Maxwell says. He sends his earnings to his family.

Maxwell pokes a metal pole into a burning air conditioner. With his bare hands, he pulls apart the red-hot metal pieces roasting in the flames. Next to us, young women stand in the biting smoke, selling small bags of water - to cool down the hot wires and copper coils. A small girl, perhaps two years old, without sandals and without a diaper, stumbles toward me, looking for her mother.

Anane wants European countries to stop dumping their e-waste in Africa and address the problems they cause.

"The industrialized countries, the European Union, cannot continue to play ostrich," Anane says. They know the electronic waste is shipped here, and should do something about it, he thinks.

Consumers need to be more aware of where their waste ends up. And recyclers should be held responsible for making sure the work is done in conditions safe for people and the environment, Anane says.

As the sun sets, we come across Joshua, a five-year-old with a vacant face. He's on his way to work at the dump, carrying a metal bin on his head. And he's in complete despair - some of the bigger boys have taken away his work tool: the speaker magnet. He can't collect magnetic metals now, and he doesn't know what to do.

Then I find the remains of a copy machine from Cologne, Germany. A sticker on the side of the old machine says: "This copy machine is suitable for use with recycled paper."

It's an ironic farewell from one of the worst e-waste dumps in the world.

Reacting to recent criticism, Ghana’s president John Dramani Mahama has announced anti-corruption measures are to be stepped up. In addition, the president and his ministers will take a 10 percent salary cut. (21.11.2013)

Heating with wood is inexpensive and, if done correctly, it can be eco-friendly. Some 15 million fireplaces and wood-burning stoves are installed in homes across Germany, but the soot produced is harmful to health. (19.09.2013)