A leading Holocaust scholar has criticized a monument in Berlin to homosexual victims of Nazi Germany unveiled this week, saying the location was poorly chosen. 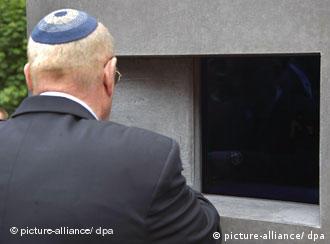 Israel Gutman of Jerusalem's Yad Vashem Institute told a Polish daily in an interview published Wednesday, May 28, that Germany had made a mistake by erecting the monument to commemorate homosexual victims of Nazi Germany in the heart of the capital, Berlin, news agency AFP reported.

"For many years after the war I had the impression that the Germans understood the immense scope of the crime of the Holocaust which they had committed ... But this time, they made an error," Gutman told Rzeczpospolita.

"The location was particularly poorly chosen for this monument. If visitors have the impression that there was not a great difference between the suffering of Jews and those of homosexuals, it's a scandal," Gutman said, according to AFP. "A sense of proportion must be maintained."

Across the street from Jewish memorial

The simple grey rectangular stone monument was unveiled earlier this week by Berlin's openly gay mayor, Klaus Wowereit, at the Tiergarten park, half a block from the iconic Brandenburg Gate and across the street from Germany's national memorial to Jewish victims of the Holocaust.

Designed by Danish-Norwegian artists Michael Elmgreen and Ingar Dragset, the monument contains a window that invites the visitor to look inside and see a film of a gay couple kissing.

A text on the stone surface details the persecution of gays under Hitler. The Nazis banned homosexuality in 1936 and convicted around 50,000 people for "unnatural" behavior deemed unbecoming of the Aryan "master race." It is estimated that between 5,000 and 15,000 homosexuals were deported to Nazi concentration camps, where more than half died.

Gutman, himself a Holocaust survivor, said the Nazis persecuted "exclusively German" homosexuals, many of them Nazis. They were "victims of internal political battles within the NSDAP," the Nazi party of Adolf Hitler, he said.

German politicians will dedicate a memorial in Berlin this week to the tens of thousands of homosexuals persecuted during the Nazi regime. Gay activists say the memorial is long overdue. (26.05.2008)

Fifty years ago, a trial against 10 members of a Nazi commando in the city of Ulm, changed the way West Germany began to deal with its fascist past and crack down on crimes committed by the Nazis. (20.05.2008)