Hollande and Merkel voice concern to Russia over Ukraine violence

The leaders of France and Germany have voiced "grave concern" over the ongoing violence in Ukraine and called for a ceasefire. It comes hours after pro-Russian separatists shot down a military plane, killing 49. 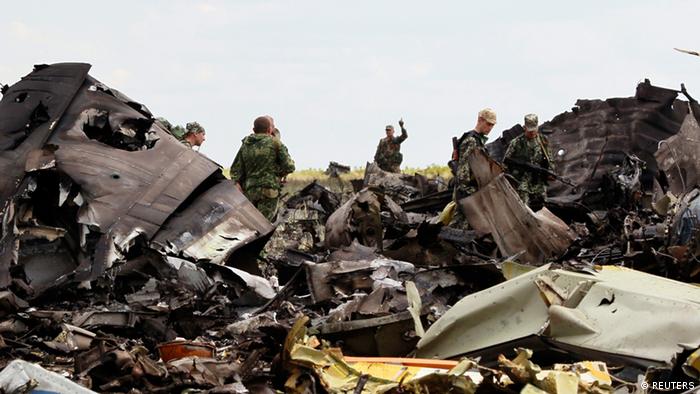 In a telephone call with Russian President Vladimir Putin on Saturday, French President Francois Hollande and German Chancellor Angela Merkel conveyed their "grave concern" over the ongoing fighting in Ukraine.

According to the French presidency, Hollande and Merkel, "stressed the importance of rapidly reaching a ceasefire in Ukraine."

"It is about creating the conditions to de-escalate the situation on the ground, especially by preventing the transfer of fighters and weapons across the border (with Russia) and calling on the separatists to end their fighting," the statement added.

According to Ukraine's military, rebels fired on the Illyuhsin-76 transport plane with anti-aircraft and heavy machine guns as it prepared to land in the eastern city of Luhansk early on Saturday. The aircraft was carrying troops on rotation, machinery, equipment and supplies.

Ukraine's pro-Western government controls Luhansk airport, but the city itself is in the hands of pro-Russian rebels.

The attack marks the single most deadly incident in more than two months of clashes between pro-Kremlin rebels and Ukrainian army forces in the country's east.

In response to the attack, Ukrainian President Petro Poroshenko met with his defense and security chiefs to discuss a response to the downing of a military plane by pro-Russian separatists.

"All those involved in cynical acts of terrorism of this magnitude must be punished," Poroshenko said in a press release. "Ukraine needs peace. However, the terrorists will receive an adequate response."

Shortly after the downing of the transport plane, a crowd of several hundred mostly young people smashed embassy windows and pulled down the Russian tricolor flag.

The Russian foreign ministry accused Ukrainian police of inaction and said this amounted to a "grave violation of Ukraine's international obligations."

"They stressed the need to reach an agreement to settle the issue of the gas supply by Russia to Ukraine," the statement from the French presidency said.

"Each side explained its position today. No solution was found," Prodan said.