Hitler paintings on auction - who buys them?

Hitler paintings are going under the hammer on November 19. The auctioneer Kerstin Weidler told DW why the people wanting to buy them are not all Nazis. 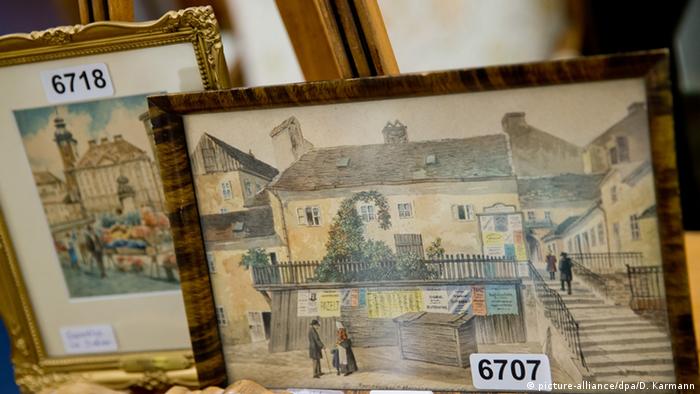 DW: Ms. Weidler, what are the items to be auctioned?

There are pictures signed and monogrammed "A. Hitler." We have 22 lots; one of them contains an album in which five pictures were glued.

What is your favorite picture?

That's a question that can't be answered. There's a picture from Hitler's catalog of works that portrays the Brandstätte in Vienna [Eds.: a street in the historical center of the city]. That could be interesting for a collector.

Hitler described himself as an "artistic genius." Was he a good painter?

He described himself, according to the catalog of works, as a painter until 1920. We can't comment on his "artistic genius" on the basis of the works we are seeing, which are of very varying quality.

He had different artistic phases. Did he develop his own style?

No, that's the point. He experimented by reproducing pictures, postcards and imagery that were commonly sold - such as the Munich registry office, for example.

How can buyers be sure that they are buying an original in this auction?

We have a few pictures that were authenticated, partly by August Priesack, the editor of Hitler's catalog of works [Eds.: the historian August Priesack worked in the 1930s at the main archive of the Nazi party and provided the basis for the official catalog later established by US editor Billy Price].

Did you test the authenticity of the images?

We did lighting tests and we selected them because we believe they are by Hitler.

Where do the pictures come from? Who are the sellers?

They're different people; they come from Austria and from Germany. There are owners who no longer wanted to have them stored in a safe. They are private owners, for example a pastor's household whose collection was found after the publication of the catalog of works and is therefore unfortunately not included in it.

Who collects Hitler pictures? Are they all old Nazis?

Not at all. Among the buyers, we have collectors who want to own a piece of world history. There are customers from all over the world, for example a museum in Brazil.

What are the motivations of these collectors?

It's hard to say. I don't know if they are looking for something that's part of the catalog of works in order to say, "I own a picture that's proven to be in the official book." There are clients who want everything related to Vienna, others focus on Munich.

There are presumably many artists inspired by Munich, but not many of them are called Adolf Hitler…

Ms. Weidler, the website of your auction house has no information about the auction of the Hitler pictures. Did you want to avoid the hype?

Our catalogs are online. Of course, there are certain collections by famous personalities that get more media attention than others. This is part of a yearly auction; in this case there are 22 lots.

Do you enjoy the publicity it gives you, or not really?

For an auction house, media coverage is obviously always good. But in this context, we are extremely sensitive and also want to stay neutral. The client who owns these pictures wants to sell them, and we serve as an intermediary between the seller and the buyer. There is this historic heritage in Nuremberg, and its our job to try to deal with it in the best possible way.

Kerstin Weidler is from the Weidler auction house in Nuremberg.