A publishing house in Berlin has released a card game featuring 32 dictators, including Adolf Hitler. The creators wanted to make an ironic statement about the tyrants but not everyone appreciates the joke. 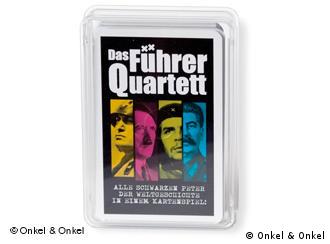 Not everybody thinks a card game with dictators is funny

The game, called Das Fuehrer Quartett, is based on a popular German children's card game called Quartett, but with a difference. In the traditional game, the cards feature cars or flowers or even beer brands, which players try to collect from their opponents. In this new version, the cards present pictures and information on notorious historical figures such as Joseph Stalin, Francisco Franco and Adolf Hitler.

"We didn't really have a clear political idea in mind with the game," said Volker Oppmann of Onkel & Onkel, the Berlin-based publishing house behind the deck. "But we did want to take away some of the power that these figures still have. When you can laugh at them, you don't fear them as much."

Each card features one dictator, the country he ruled, his educational/vocational background and how long he was in power, among other factoids. The cards stick to the historical record and also present information that might be less well known, Oppmann, 33, said.

For example, the card featuring Stalin explains that while in school he was repeatedly caught reading material that had been banned. The card on Romania's Nicolae Ceausescu reveals that he had a soft spot for Vlad the Impaler, said to have been the inspiration for Bram Stoker's "Dracula."

The cards have an ironic tone, and the authors use wordplay in some of the descriptive categories or have a lighter touch when presenting additional information about a figure. For Augusto Pinochet, the card says he destroyed a democratic system with help from the US, but rebuilt another one later, only to be toppled by it. "Somehow stupid," it says.

"I think we succeeded in finding the right mix of seriousness and fun," said Oppmann.

The public appears to appreciate the game's ironic tone; the decks have been selling fast. Of the first print run of 2,000, Oppmann said more than half are sold out and a second printing is planned.

But not everyone thinks presenting war criminals as slightly risible figures is a positive thing.

"The further back the Third Reich recedes in history, the more bizarre the way it is dealt with becomes," he told the Bild newspaper.

Oppmann rejects the critique, pointing out that when the card game was released at this year's Leipzig Book Fair, employees from the Bundeszentrale für Politische Bildung, a democratic political education organization, found the cards hilarious and ordered five decks right away.

"If these people can laugh at it, I'm not worried," he said.

In fact, the goal of Das Fuehrer Quartett, unlike in traditional Quartett, is not to gather as many cards and dictators as you can. In this version, the winner is the first person to rid him or herself of all these despots.

The Documentation Center at the former Nazi party grounds in Nuremberg has called for a commentated version of Adolf Hitler's infamous book "Mein Kampf" to be published before the copyright runs out. (25.04.2008)