A well-traveled HitchBOT robot will be on display at the Heinz Nixdorf Museum in Paderborn, Germany. HitchBOT traveled through Germany in 2015, visiting sites such as the Brandenburg Gate and Cologne's cathedral. 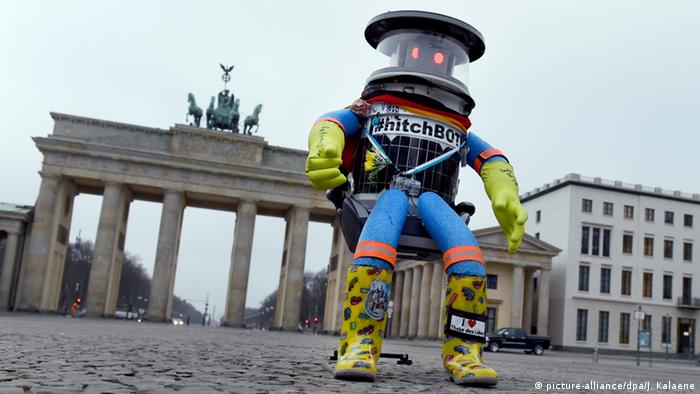 A much-loved hitchhiking robot made its way to Heinz Nixdorf Museum in the northwestern German city of Paderborn on Tuesday.

The creation of hitchBOT was a social experiment — the robot can have a basic conversation, but it is immobile and can only stretch one arm and thumb, which allows it to signal for a ride.

Its mobility meant it relied on strangers to take it from place to place, or position it by the side of the road to await a ride to the next destination. The idea behind the social experiment was to test people's willingness to pick up an autonomous hitchhiker.

HitchBOT can run on solar energy, but could also be recharged using a car's cigarette lighter socket if it ran out of juice.

The original hitchBOT traveled through Canada, the Netherlands and Germany, including the cities of Munich, Berlin, Cologne and Hamburg.

In 2015, a new hitchBOT was created for an American adventure from Salem, Massachusetts to San Francisco. But its trip was cut short after vandals in Philadelphia got their hands on it.

It managed to tick off two of the 16 items on its US bucketlist before the incident: see the lights at Times Square in New York and do the wave at a sports game.

While in Germany in 2015, hitchBOT spent 10 days visiting sites such as Neuschwanstein Castle, the Brandenburg Gate, and Cologne's cathedral. It even attended a wedding in Frankfurt. It also participated in the Rose Monday parade for Carnival in Cologne. 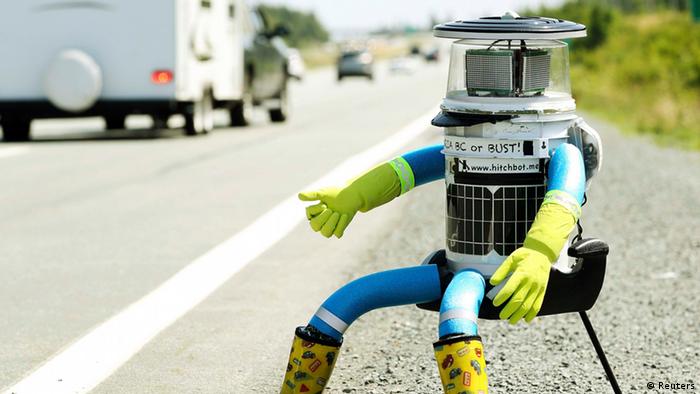 HitchBOT tries to catch a ride

Hitchhiking robot hitchBOT, created by researchers in Canada, has been damaged beyond repair, ending its first American tour. The robot had previously traveled safely across Canada and parts of Europe. (02.08.2015)

As heavy rains hit swathes of New Zealand, the mayor of the especially devastated city of Nelson says the effects of the floods "couldn't be overstated." The town faced roughly two months' worth of rain in three days.