High turnout in landmark Afghan elections | Asia| An in-depth look at news from across the continent | DW | 05.04.2014

Despite threats from the Taliban, Afghans lined up for hours in front of polling stations on April 5 to elect a new president. Estimates put voter turnout at 58 percent, with many women said to have cast their ballots. 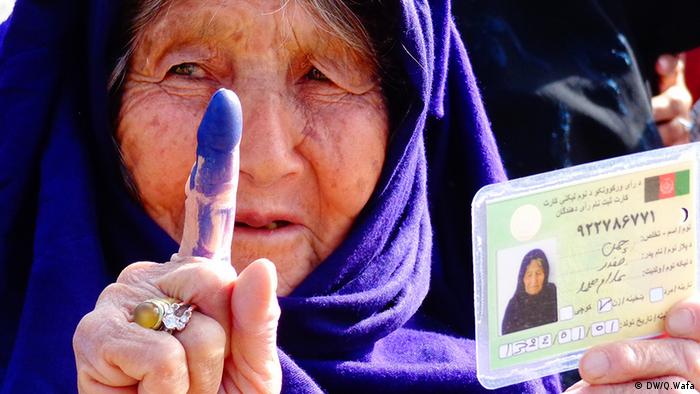 Haji Gul Agha had waited for hours to cast his vote. "Even if cartridges had rained and the ground had been filled with mines, we would still have come out to vote," the 60-year-old said cheerfully. This view was shared by Ghulam Sakhi, who was proud of being able to vote. "Today was a historic day for Afghanistan, everyone was expected to take part in the elections," said Sakhi, who, in order to exercise his right to vote, had taken a long walk to the polling station in the central Afghan province of Ghazni.

According to estimates by Afghanistan's Independent Election Commission (IEC), some 58 percent of eligible voters cast their ballots in the country's more than 6,000 polling centers. 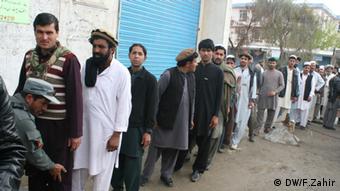 But it appears that the IEC underestimated the people's will to vote, prompting officials to extend voting time by one hour due to the high turnout. There were even reports of polling stations running out of ballot papers.

A woman waiting in line in front of a polling center in the central province of Bamyan said that some 200 people had returned to their homes without voting as they refused to wait any longer.

"For women, it is particularly difficult as we also have to take care of our children," the woman complained. The issue has triggered discussions as to whether the shortage of ballot paper was a deliberate attempt at electoral fraud or simply an organizational failure.

Surprisingly, the shortage was the biggest issue in this election as there were few reports of attacks. Only 211 of the 6423 polling stations remained closed, according to the IEC.

As Afghanistan prepares for elections, there are fears a spike in violence might derail the electoral process. But UNAMA chief Jan Kubis tells DW the success of the vote is crucial for the country's political transition. (02.04.2014)

The radical Islamist Taliban had repeatedly threatened to sabotage the poll. But even highly volatile regions such as Helmand Province remained peaceful on election day. One voter, Meena Gul, proudly showed off her finger stained with indelible ink, which is used to prevent people from voting more than once.

"I'm so happy," she said. "The security situation was good today; we weren't scared. I am very excited and pleased that women are allowed to take part in the poll."

Many experts had expected a low turnout of female voters as women are often targeted by the Taliban. But on election day, Afghan women defied the Taliban to such an extent that some reports claim they even outvoted men in the northern province of Takhar.

Voting was largely peaceful, a development largely attributed to the progress made by the country's 350,000-strong security forces. Nils Wörmer, Kabul office chief of the German foundation Konrad-Adenauer-Stiftung praised the work of the Afghan military and police.

"At least one major attack was prevented in Kabul yesterday. It seems like the Afghan security forces have done a very good job with these elections," Wörmer said.

Wahidullah Majedi from the northern province of Kunduz is grateful that the security services made these elections possible. The 20-year-old told DW that he didn't vote along ethnic lines and that he hopes the future president will be able to serve the country well and lift it out of its misery. 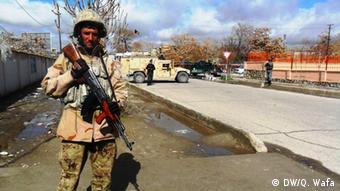 Unlike in previous elections where the ethnic background of the candidates played a key role, this time around it was their manifestos which took center stage.

"I don't care about the candidate's origin, ethnicity or language. I voted for the candidate with the best electoral campaign," said Ghulam Sakhi, who walked five kilometers to cast his vote.

About a third of Afghanistan's population is under 25 years of age. Many young Afghans, who hope for a fair electoral process, would be very disappointed to find any signs of massive electoral fraud like during the 2009 poll.

Preliminary results are set to be announced on April 24. This will be a first indication as to whether the country's youth can continue to hope for democratic change.