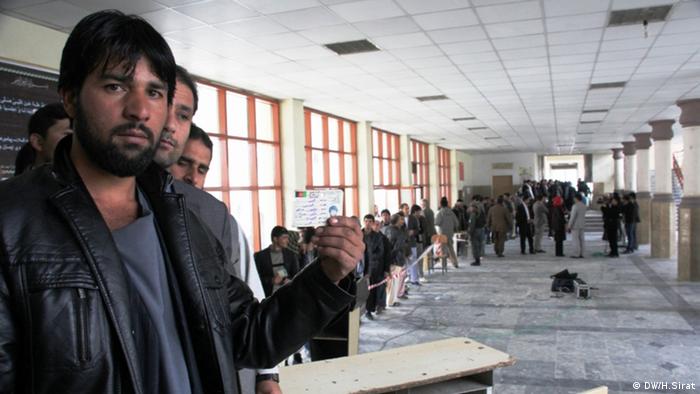 Long queues formed outside polling stations in cities across the country, as Afghans cast their ballots at some 6,200 centers under tight security. Turnout was reportedly so high that not only was voting extended by an hour, but some polling centers also ran out of ballots, reflecting the determination of the Afghan people to elect a new president, despite a recent spike in attacks by the Taliban.

Of the eight candidates in the race for the presidency, there are three front-runners - former foreign ministers Abdullah Abdullah and Zalmay Rassoul and former finance minister Ashraf Ghani - who all enjoy similar levels of support, according to unofficial polls. President Hamid Karzai is constitutionally barred from seeking a third term after ruling Afghanistan since the fall of the Taliban in 2001.

In a DW interview, Michael Kugelman - a South Asia expert at the Woodrow Wilson Center for Scholars - says the presidential elections are a sign that democracy is becoming further entrenched in Afghanistan, but also warns that the conflict-ridden country will remain a very troubled place for many years to come.

DW: Despite Taliban threats to disrupt the election and a spike in attacks in the days leading up to the vote, election day way largely peaceful. Were you expecting this?

Michael Kugelman: Yes, I was. All the violence and threats of the past few weeks have not intimidated, but galvanized the Afghans. All of last week, Afghans, including many women, were publically vowing to defy the threats by coming out to vote.

Kugelman: "If successful, these elections will mark the first ever peaceful transition of power in Afghanistan"

These elections mark a new chapter in the country's history as they show that Afghans, on a mass scale, prefer democracy to the miseries of Taliban rule. And they show that democracy is becoming further entrenched in Afghanistan.

According to estimates by the Independent Election Commission (IEC), about 58 percent or seven million out of 12 million eligible voters cast their ballots. What does this say about the determination of the Afghan people to embrace democracy?

By coming out to vote in huge numbers, Afghans are sending the loudest possible message to the Taliban. They are rejecting the militants and everything they stand for. It is a nationwide act of defiance, and one that suggests that the Taliban - despite their incessant attacks and violence - don't have much legitimacy at all among the Afghan masses.

What key political issues will determine the outcome of these elections?

The election is really about three issues: Security, the economy, and corruption. And they are all related. The Taliban exploit the sluggish economy to induce Afghans to join the insurgency with promises of good pay.

At the same time, they exploit government corruption by casting themselves as a clean and just alternative to the government. Afghans will vote for the leader they think is best in a position to kick start the economy, tackle corruption in a meaningful way, and bring some long-elusive stability to the country.

Some 12 years ago, Hamid Karzai was seen as a bearer of hope for Afghanistan. But the politician is now seen as an erratic president who alienated his allies. He is leaving office, however, with a set of achievements. (04.04.2014)

As Afghanistan prepares for elections, there are fears a spike in violence might derail the electoral process. But UNAMA chief Jan Kubis tells DW the success of the vote is crucial for the country's political transition. (02.04.2014)

With prospects of a full US withdrawal from Afghanistan, there are growing concerns the country might slide back into anarchy. DW examines the factors likely to shape the nation's security situation post- 2014. (25.03.2014)

As the three front-runners enjoy similar levels of support, will a second round of voting be necessary?

There will likely be a runoff. In fact, if one candidate is announced to have won more than 50 percent of the votes, hence negating the need for a runoff, then many Afghans will suspect fraud, and problems could ensue. Abdullah and Ghani are slightly favored over Rassoul, though neither of them has broken away from the pack. So I really do expect a runoff.

There are reports that as many as 18 million voter cards are in circulation, although there are only 12 million eligible voters. Will these election be free and fair?

How important are these elections for the future of the country?

They are important for the sake of democracy. If successful, they will mark the first ever peaceful transition of power in Afghanistan. And that is a game-changer of the highest degree. But let's not be fooled - Afghanistan will remain a very troubled place for many years, no matter how successful the election and no matter how impressive the new leader in the country.

What implications will the election and its results have for the scheduled NATO troop withdrawal from Afghanistan and the signing of the Bilateral Security Agreement (BSA) with the US?

The election bodes very well for the BSA, because every top candidate has vowed to sign it. If this happens, prospects for stability are increased. And that in turn would be a very welcome development as NATO troops withdraw.

Even though Afghan security forces are getting stronger and stronger, they could certainly benefit from a residual troop presence - not just for the sake of security, but also as a psychological boost. Such a presence would reassure Afghans that the international community remains committed to helping ensure their stability.

What are the chances of Afghanistan becoming a stable state following this vote? 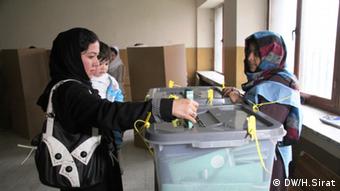 Kugelman: "By coming out to vote in huge numbers, Afghans are rejecting the Taliban and everything they stand for"

Regardless of who wins the election and how successful the election process is, Afghanistan will still face rampant corruption, economic distress, and - most significantly - an incredible level of instability.

The military will still be a work in progress as a fighting force; Taliban havens will remain in Pakistan; militants will continue to stream into Afghanistan from Pakistan and elsewhere in the region; and the country will continue to have all kinds of violent factions, from the Taliban and its allies to the various warlords operating in the country. These are not things that even the most gifted leadership in the world could address, and certainly not in the immediate term.