Heretics! And the dangerous beginnings of modern science in glorious graphic detail | Science| In-depth reporting on science and technology | DW | 14.07.2017

Heretics! And the dangerous beginnings of modern science in glorious graphic detail

If you think scientists have it bad today, spare a thought for the early philosophers - some even got burnt for heresy. Philosopher Steven Nadler and graphic artist Ben Nadler talk us through their book, "Heretics!" 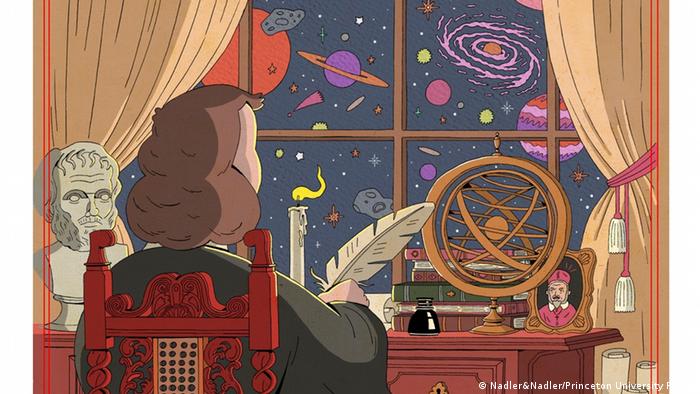 DW: A major theme, I found, in your book "Heretics!" was thinking differently. It's an illustrated, graphic, history of philosophers and the early scientists and the risks many of them faced because they dared to think differently. And it starts with a very stark image of a philosopher being burnt, having been sentenced to death. It really sets a tone. Why did you choose to start there?

Steven Nadler: We started there because it represents what was at stake for a lot of these thinkers. The notion of danger is very relative - what's dangerous in one century or place might not be so dangerous in the other. And our message is not really that the idea of thinking, or engaging philosophically and scientifically in the 17th Century was dangerous per se. Even the idea that science and philosophy, on the one hand, and religion on the other were diametrically opposed in this period - that, too, is an old myth.

The church, for example, was very supportive of a good deal of scientific research. They only stepped in when the conclusions of that research, or the thinking, clashed with dogmas of the Catholic faith, or seemed inconsistent with what the Bible proclaimed to be true.

I thought it was a good place to start the book to put these thinkers in a religious and historical context. And because the century starts with this very dramatic event of the burning of Giordano Bruno - which was, essentially, for ideas deemed heretical - but it wasn't so much that we wanted to set that as the tone for the book, but rather to show that originality and creativity in philosophy required a certain kind of courage.

It seems a constant battle though between faith and science, seeking to explain natural phenomena through empirical reason or some higher being. And I find parts of that history hard to compute. At one point you recall how Baruch Spinoza said [words to the effect] that "miracles are just natural events for which we have yet to discover the natural cause," and I feel an underlying reliance on faith there, even if it's a faith in nature, and that's confusing.

Well, Spinoza, or even René Descartes, most of these thinkers - whether they were religious or not, and some of them were very religious - saw that putting religious or theological restrictions on philosophy and science … there was a moral price to pay for that, that somehow our well-being, our social and technological progress was dependent upon understanding, knowledge and a kind of wisdom. It's a very old Socratic notion. And placing restrictions on philosophizing by non-rational, or irrational, dogmas of faith puts progress at risk. Descartes and [Gottfried Wilhelm von] Leibniz, and especially [Isaac] Newton, were fairly devout or pious individuals, and they did not intend in any way to undermine religion. They were respectful of theological authority. But at the same time they thought that human well-being depended upon this independent and creative use of our natural faculties. And that meant trying to understand the world wherever that might take them. 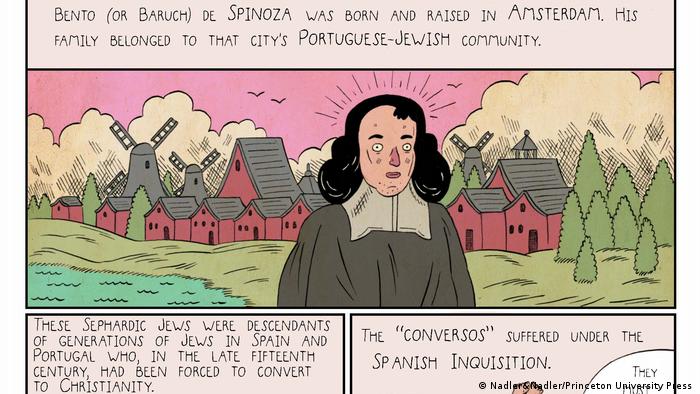 Baruch Spinoza: miracles are "events whose natural causes are unknown to us"

Let's bring Ben in here, because I'm also interested in the form of the book. It's a graphic novel, a genre which has gained a lot of respect over the past 10-15 years, but which is still not that common as a form for philosophy and science. So how did you approach the project?

Ben Nadler: It is a relatively young industry so there's not much room for branching out in the medium. But I have many graphic novel influences that helped me shape what I wanted it to look like. And we were working with a publisher that had no comic experience, so it was collaborative, but everyone had fresh eyes on it too. We looked at things like Logicomix, and we collected as many other academically inclined comics as we could, but it was new territory, so there was a lot of freedom in breaking down the text. We could take it in any direction we wanted.

Some of the images are quite spaced-out … popping eyes and other weird amorphous forms. It's part of the lingua franca of graphic novels, I suppose. But is "Heretics!" aimed at a younger generation because it's a graphic book? 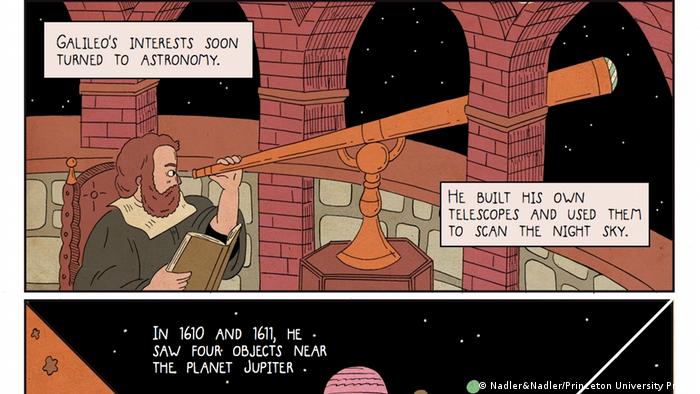 It's definitely accessible to a younger generation in that it is images and words, and it's a little easier to digest. But we tried hard not to condescend or boil it down too simply. And, you know, the first spread is a man being burned, so it does set a certain dramatic tone. But I think our audience includes people looking for an introduction to the subject matter.

So much in science is about building on what previous generations have done. And you're a father and son team, one generation and the next. How was that work experience?

Steven (father): Well, we're still speaking to each other! So that's a good sign. But I think it worked really well. As Ben said we wanted to walk a fine line between making sure we got the content and scholarship right, but at the same time avoid doing something that's patronizing or over-simplified. That was the first challenge. And the second challenge was that a lot of those other books about philosophy seem so generic. They don't have a style - they could have been done by anybody. And we wanted this to have an identifiable style. So we would go back and forth a lot [discussing the text and the images].

And did you have any of these philosophical discussions while making the book?

Ben (son): Well there's a good year-and-a-half where I'm doing nothing but pushing ink onto Bristol board at my easel, not even really looking at the text. So during the process there wasn't that much conversation about the content. 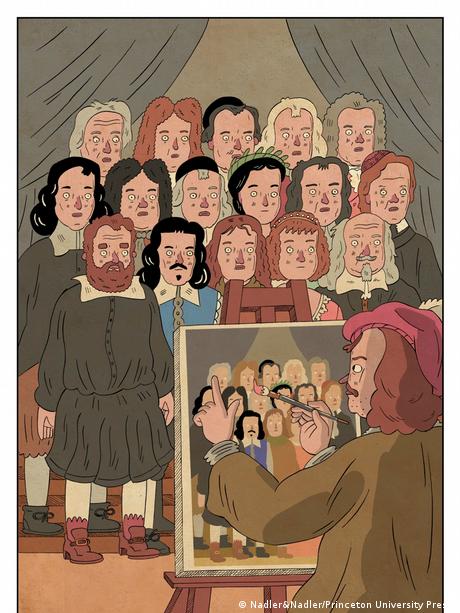 Altogether now: philosphers and scientists in "Heretics!" From Spinoza to Descartes, Leibniz to Locke, and others in between

Unless there was something conceptual that I was having trouble trying to visualize, because I didn't understand it as well, we'd have to talk it through, like what's this concept?

Steven: Yes, I'd get a phone call from Ben in a bit of a panic, saying, "Dad, what the hell is a monad?!

Good question! But tell me, when you as people, as philosophers, deal with these concepts about life and nature, how does it make you feel?

Steven: I've been teaching philosophy for over 30 years and it would be really dispiriting if it hadn't had some effect on the way I look at things. In many ways I'm more interested in the history of philosophy than I am in particular questions, but only because I think that throughout philosophy's history there are certain thinkers who seem to get things right. And I can imagine that as I get older and I face various points in life that I will be glad I've had the opportunity to think for many decades about these questions. It'd be a very useless profession if after so many years it didn't give you certain tools for facing the kind of things we face. I only wish more people had the opportunity after college to do philosophy. 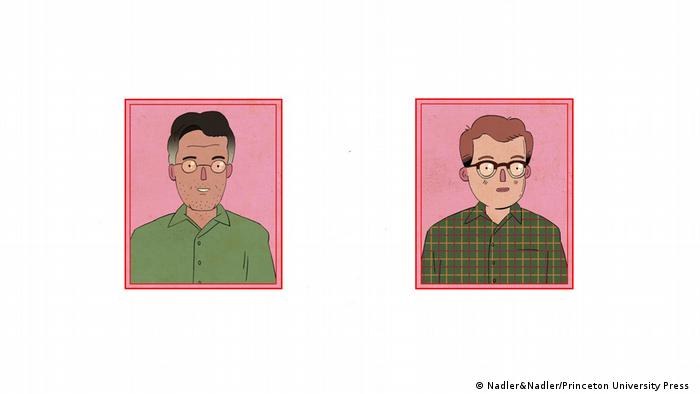 Ben: I got to be a student during the process. I got to finally dive into what my dad has done all day for my entire life! And as an artist I was drawn to the drama of it. I found it to be so full of conflict and intrigue that I was more excited from a storytelling point of view. But also I felt lucky to be able to learn so much while working on this book.

Steven Nadler is the William H. Hay II Professor of Philosophy and Evjue-Bascom Professor in the Humanities at the University of Wisconsin–Madison. His books include "Spinoza: A Life," and "Rembrandt's Jews," which was a finalist for the Pulitzer Prize. Ben Nadler is a graduate of the Rhode Island School of Design and an illustrator. Their book, "Heretics! The Wondrous (and Dangerous) Beginnings of Modern Philosophy" is published by Princeton University Press (2017).