Heckler and Koch vindicated in G36 accuracy row, but lobbying concerns linger | Germany | News and in-depth reporting from Berlin and beyond | DW | 14.10.2015

Bundeswehr soldiers have lauded, in a new government report, the accuracy of the Heckler & Koch G36 rifle. But there are still plenty of questions over the German gunmaker's ties to the government. 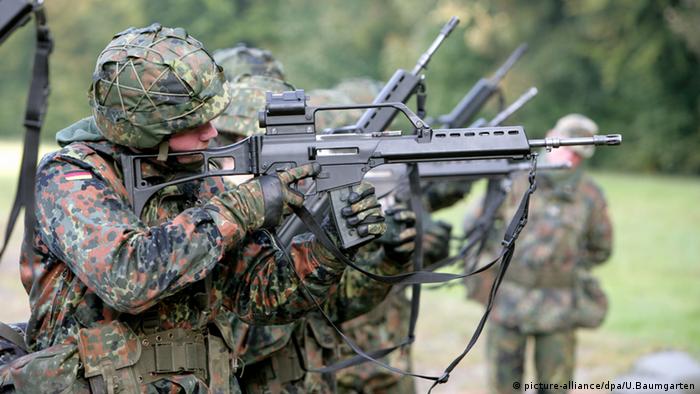 Even the good days for Heckler & Koch turn out bad. On the same day that the German gunmaker's G36 assault rifle, the standard weapon of the German military, received a glowing report from one government commission, another slammed the "intolerable" close relations between the manufacturer and the army's equipment authority, and hinted at (but did not prove) improper lobbying.

The German Defense Ministry commissioned three separate reports into the G36, following revelations that the gun lost accuracy when heated up - either in hot weather or through sustained use - and that the company may have influenced the government to ensure that the rifle would still be used by the army.

One of these commissions released its results on Wednesday, and while it vindicated the company, the details of another internal Defense Ministry report were considerably less enthusiastic. 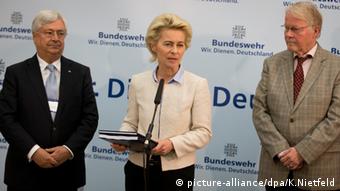 For Heckler & Koch, the report on the rifle's battle efficacy could not have been better. Led by Green party politician Winfried Nachtwei, the commission questioned 200 soldiers to find out whether they had ever been put in danger, or indeed directly harmed, by the gun's supposed lack of accuracy.

"The mission-experienced soldiers refuted the classification of the G36 as a glitch-rifle," the commission said in Berlin on Wednesday. The report had already been leaked to Wednesday's edition of the "Sächsische Zeitung," in which one platoon commander who served in Afghanistan in 2009 offered nothing but glowing words about the gun's accuracy. "We always felt in a superior position with the G36, particularly because we could have an impact on the target with relatively little ammunition," he told the Nachtwei commission.

The commission was careful, however, not to question the scientific tests that had been conducted on the G36, confining itself only to the observation that they had tested "extreme cases" that were unlikely to occur on the battlefield. Christine Buchholz, defense policy spokeswoman for the socialist Left party, was also cautious about the findings. "Of course there are still a few questions," she told DW. "It might be right that no German soldier was hurt in battle, but they didn't ask whether all the targets were hit."

Nonetheless, the commission's appraisal will have lifted the hearts of H&K executives, who have spent months defending their prestige weapon - which has been licensed around the world and is used by several other European armies - from derisory press and politicians. As the results of new accuracy tests came through earlier this year, and the damning media reports piled up, Defense Minister Ursula von der Leyen declared in April that the gun had "no future" in the Bundeswehr, and she would begin replacing the over 160,000 G36s it currently uses, a process likely to take until 2019.

On Wednesday, von der Leyen refused to be drawn into a knee-jerk response to the report: "We will analyze it now, review it calmly, and then respond accordingly," she said in a statement.

But even as the champagne corks popped at H&K headquarters in Oberndorf, southwestern Germany, state TV network ARD released details of an internal Defense Ministry report that found "intolerable management behavior" between H&K and the Federal Bureau of Bundeswehr Equipment.

That government office has for several years kept a test center at the H&K factory in Oberndorf, ostensibly to avoid the safety headache of transporting weapons across the country. ("That's a scandal in itself," said Buchholz.) Now, without naming its sources, or quoting them directly, ARD learned "from government circles" that an internal ministry commission complained of a "lack of professional distance" between the equipment bureau and H&K.

"It doesn't surprise me," said Christina Deckwirth of the Berlin-based watchdog LobbyControl. "Heckler & Koch has caught our attention often. There are various relationships between Heckler & Koch and the government that are just far too close."

Buchholz also had a number of questions: "They haven't yet explicitly addressed the issue that there are clearly structures, or individuals, or networks in the defense ministry that hold a protective hand over Heckler & Koch," she said. "The whole swamp needs to be drained. The Heckler & Koch clique needs to be exposed; only then, can such problems be avoided in the future." 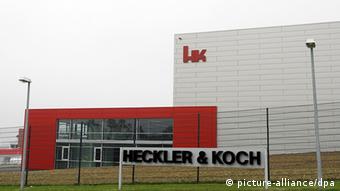 The fact that this clique exists was made clear in late September, when another ARD investigation found that defense ministry officials helped H&K get around the government export controls in what turned out to be the illegal sale of thousands of G36s to the Mexican government. H&K's headquarters were raided by Stuttgart prosecutors in 2011 over that deal.

In an apparently unrelated development, it emerged in 2011 that Volker Kauder, head of the Christian Democratic Union's parliamentary group, whose constituency of Rottweil is the home of H&K, accepted several party donations from the gun maker - all of them below 10,000 euros ($11,300) and therefore below the limit at which they have to be made public.

"It reminds one of the current VW scandal," Deckwirth told DW. "It seems the government keeps this protective hand over companies - there is close cooperation. It's obvious that the government protects more than it checks. It's particularly dicey with weapons companies because they're dependent on these contracts."

Though there was no direct evidence of corruption in the G36 accuracy affair, one incident is said to have caused particular concern: in May 2015, it was discovered that H&K workers had the keys to the federal equipment bureau's test center in the factory, and therefore had access to confidential government documents. In response, the ministry is considering whether to move the test center away from the factory.

Heckler & Koch did not respond to a request for comment.

Germany's military has decided to get rid of its main assault rifle, the G36. A replacement will be sought via Europe-wide tender by 2019. Manufacturer Heckler & Koch has begun court action to save its reputation. (08.09.2015)

First there were problems with the German military's standard infantry weapon, the HK G36. Now the same is apparently so for what's set to be the Bundeswehr's new standard-issue machine gun, the HK MG5. (06.09.2015)