Sudden and heavy snowfalls have hit Germany, bringing traffic chaos to the nation's roads and leaving at least three people dead. Police are advising drivers to stay at home. 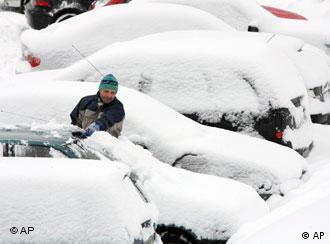 Heavy and rapid snowfall left roads in parts of Germany impassable, with three lives lost as a result of the blizzards.

In the state of North Rhine-Westphalia alone, police said that there had been at least 300 accidents that could be put down to snow and ice.

One man in the region was killed, apparently after getting out of his car following an accident and being hit by another vehicle.

Two people in Bavaria died in separate traffic accidents attributed to the weather, both colliding with oncoming vehicles.

The northeastern state of Mecklenburg Pomerania, where ground snow has remained since mid-December, was hit hardest. Major highways were closed after trucks jack-knifed and railway lines were shut until they could be cleared. Cars were left buried in roads and even snow clearance vehicles became stranded.

"People should just stay at home"

In the city of Rostock, bus services were suspended and the second division city football team Hansa Rostock was forced to cancel its game with FC Union Berlin.

There were traffic delays on many highways across the country while at airports some flights were late or even cancelled.

Police warned motorists to keep off roads unless travel was absolutely necessary and that stranded drivers might wait hours for help. "People should just stay at home," a spokesman said.

After sub-zero temperatures and heavy snowfall led to travel disruption and power blackouts in Germany, the weather situation appears to be easing. The treacherous conditions also led to deaths across Europe. (11.01.2010)

Freezing temperatures have disabled so many of Deutsche Bahn's high-speed trains that every second trip between Berlin and Munich has been cancelled as people across the country try to get home for Christmas. (24.12.2009)

Snow storms across western Europe killed at least five people on Monday and disrupted flights and train services in Britain, France and Spain as authorities warned of worse to come. (03.02.2009)