Headless Hitler Will Return to Berlin Wax Museum After Repairs | Germany| News and in-depth reporting from Berlin and beyond | DW | 07.07.2008

Headless Hitler Will Return to Berlin Wax Museum After Repairs

Two days after a man wrenched the wax head off an effigy of Adolf Hitler, operators of a Berlin tourist attraction said they would repair the waxwork and put it back on display. 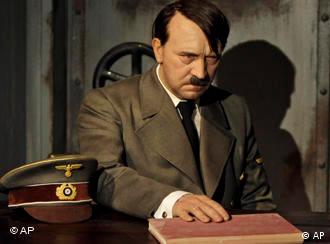 The statue has been controversial

Madame Tussaud's, a British company, defended its decision on Monday, July 7 to persist with the display against widespread criticism from Germans.

"Hitler represents a decisive part of Berlin's history which we can't just pretend did not happen," the company said in a statement.

A 41-year-old man broke the head off the figure after he had been egged on by drinking mates in a bar.

No call for speedy repairs

But a leader of Germany's main Jewish group said Monday he saw no pressing need to repair the figure.

"I would not be unhappy if the effigy did not come back," said Stephen Kramer, general secretary of the Central Council of Jews.

Public figures have been careful not to directly acclaim the attack by Frank L., who faces a criminal damage charge. The self-confessed attacker has told German newspapers he once worked as a policeman in Berlin, but decided that work did not suit his punk-music-influenced lifestyle. He was unemployed for several years before being trained to care for old people in a home.

He said friends in a bar had discussed wrecking the effigy and he had boasted he would do it, leaving him little choice. He said he spent hours plucking up courage to carry out the attack. Police have not confirmed if the barroom motive is true.

Many Germans were upset that Hitler was included in a commercial amusement close to the Holocaust Memorial and other memory sites. The real Adolf Hitler committed suicide in his bunker close by in 1945.

A new branch of Madame Tussauds in Berlin, set to open on July 9 a few hundred meters away from the landmark Holocaust memorial, is defying the critics by including Hitler in its display of German historical figures. (30.05.2008)

Prominent European media outlets recently circulated false reports of an Adolf Hitler doll being made in Ukraine. Ukrainian journalist Yevgeny Minko said he was disappointed with how the erroneous story was handled. (15.05.2008)